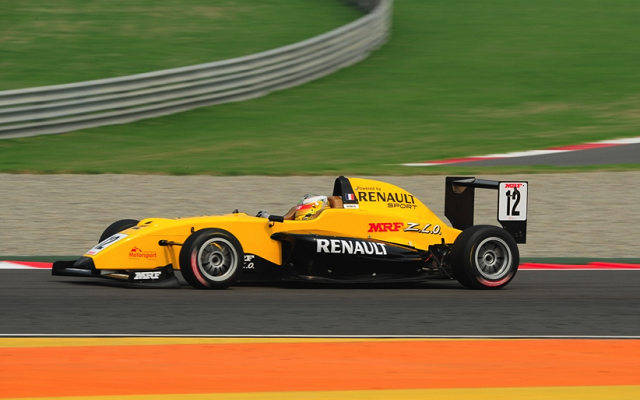 The F1-supporting opening round of the MRF Challenge took place this weekend, as household names in European junior single-seaters found themselves battling against some surprisingly on-form underdogs…

Pic and Svendsen-Cook take wins, but it’s Ellinas who leads the standings

The yearly MRF Challenge series kicked off at Buddh International Circuit this weekend, with the opening round seeing its headline-grabbing favorites expectedly in contention for wins and podiums.

The feature race was all about the fight between the much-esteemed duo of Arthur Pic and Tio Ellinas. The Frenchman and the Cypriot shared the front row after a close qualifying affair and proceeded to battle it out for the win in the race. Ellinas maintained near-constant pressure on the poleman, even briefly taking the lead on lap four, but it was Pic who prevailed in the end, crossing the line less than a second ahead of the GP3 frontrunner.

Another expected frontrunner Harry Tincknell qualified in third, but was punted out of the race in a turn one collision. With the Briton sidelined, MRF Challenge expert Yudai Jinkawa slotted into the final podium position. Sam Dejonghe and Rupert Svendsen-Cook completed the top five.

Having captured a reverse-grid front row start for race two, Svendsen-Cook then promptly proceeded to run away with the win, with the only hiccup coming when he accidentally engaged the pit-lane limiter on the final straight. However, that was not sufficient to rob the Briton of the victory, as he finished ahead of second-placed Dejonghe, who himself kept Ellinas at bay. The Cypriot, who rounded out the podium, moved into the championship lead.

Jinkawa took fourth, holding back Pic after the Frenchman made an early mistake when fighting for third.

In race one, Hubert drove a controlled race to take the win, with Dennis Anoschin and Jules Gounon finishing close behind to complete the podium. The usual frontrunners Felix Hirsiger and Matevos Isaakyan rounded out the top five.

The reverse-grid race two was, as usual, the most hectic of the bunch. While qualifying pacesetters Hubert and Ivan Kostyukov were out of the running early on, the drama didn’t stop there as Isaakyan and Amaury Rossero came together while fighting for the lead. As such, Deguffroy inherited first and cruised to his maiden French F4 victory, ahead of Gounon and Tom Le Coq, while Anoschin and Neal van Vaerenbergh made up the top five finishers.

Hubert was back to winning ways in the final race of the year, converting pole into victory, with Kostyukov taking a close second. Hirsiger, van Vaerenbergh and Le Coq took third, fourth and fifth respctively. 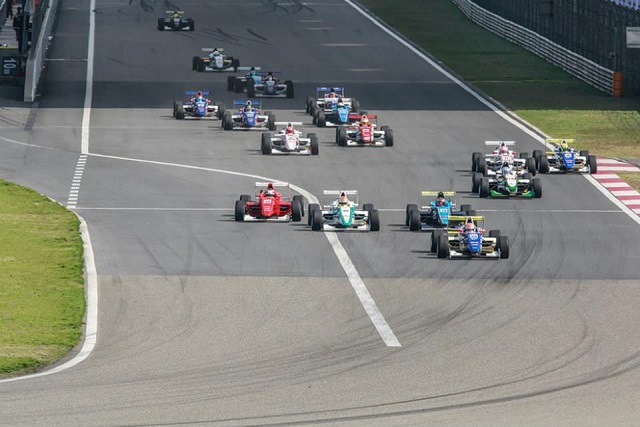 With three drivers coming into the Formula Masters China finale at Shanghai, the series was looking at the possibility of a very close title fight. And, in the end, it turned out almost a little too close, as the championship was decided hours after the final race drew to a close.

Australian racer Aidan Wright enjoyed a ten-point lead over teammate Afiq Ikhwan ahead of the final three races, with Akash Nandy a further 11 behind. In qualifying, however, it was Nandy who performed, taking one of the poles, with Ikhwan sealing two front row starts and Wright failing to do better than fourth.

In race one, Thai driver Tanart Sathienthirakul took center stage, achieving his maiden victory in the series from pole. It wasn’t all easy for the Eurasia driver, as he had to fight with Nandy, but the Malaysian soon settled into second before spinning out on the final lap, which virtually put an end to his title hopes.

Things were looking up for Ikhwan coming into the second race, as the Malaysian was just two points down on Wright and had race two pole to go along. He promptly converted that into a race victory, finishing ahead Sathienthirakul, Solomon and Wright, who was now five points off the lead. Nagabuchi took fifth, while sixth went to Nandy, which mathematically eliminated him out of contention.

The title came down to the wire in race three. An excellent start from Wright saw him move into the lead from fourth on the grid and, following a safety car period, the Aussie comfortably took the car to the checkered flag.

However, Wright’s win would not guarantee him the title, with Ikhwan needing to finish second to become champion. He did just that, but all celebrations were postponed when both contenders found themselves under investigation post-race – Wright for overtaking Ikhwan under yellows and the Malaysian for coming together with third-placed Sathienthirakul on the final lap.

It came down to two very tough calls for the stewards. And, whilst the first one allowed Wright to keep the win, the second one gave him the title, as Ikhwan was demoted a spot in the classification.

F3 Sudam’s main class leader Felipe Guimaraes edged as close as ever to the title, as he took two victories in the Taruma round of the championship.

For the second time in the season, the Brazilian missed out on pole to Argentinian Class B leader Bruno Etman. However, having secured a front row start, Guimaraes ended up in a prime position to challenge for the win,as he overtook Etman on the tenth lap and proceeded to take the checkered flag.

Gustavo Myasava followed Guimaraes in second, finishing close behind the leader. With Etman calling it a day due to a mechanical failure, it was the other Class B runner Artur Fortunato who got to round out the podium.

Rodrigo Gonzalez started the reverse-grid race two from pole, but wound up surrendering the lead to Raphael Raucci right away. The RR Racing Team driver got to lead for three laps, before retiring from the race while defending first from Guimaraes.

The championship leader was then free to cruise to victory, which he did, as Myasava and Etman completed the podium.

In the Class A standings, Guimaraes leads Raucci by 36 points, with 80 available over the remaining four races. Meanwhile, Etman enjoys a 32-point lead over Fortunato.

Rodolfo Camarillo was another driver to make a crucial step towards the title this weekend, as he took a double victory in the penultimate round of the season at Chiapas.

Things were rather straightforward in the opening race, as Camarillo started from pole and controlled the race to the checkered flag. Sebastian Ordonez and Luis Michael Dorrbecker battled it out fr the rest of the podium positions, with Ordonez eventually taking second. As Dorrbecker took third, Vicente Bas had to settle for fourth after a closing stages mistake, while Giancarlo Vecchi was very close behind in fifth.

The reverse-grid race was a bit more unpredictable, but eventually, the usual suspects took over at the front. Vecchi led the race from lap three, but was soon dethroned by Camarillo, who brought the car home to complete the double.

In a close fight for second, Vecchi maintained the position, as Dorrbecker held on to third, ahead of Hugo Becerra and Pablo Sanchez.

Camarillo’s title now appears to be a formality, as he needs only a small handful of points in the final round to make it official. Sanchez is now the only other driver with a mathematical shot at the championship.

Next round: Interlomas, November 23-24

Title or not, it’s always important to finish a season on a high note. And Hubert, the reverse-grid retirement notwithstanding, did just that. After a couple of tough rounds in the latter part in the season, the finale reminded everyone why Anthoine cruised to the title in the first place.