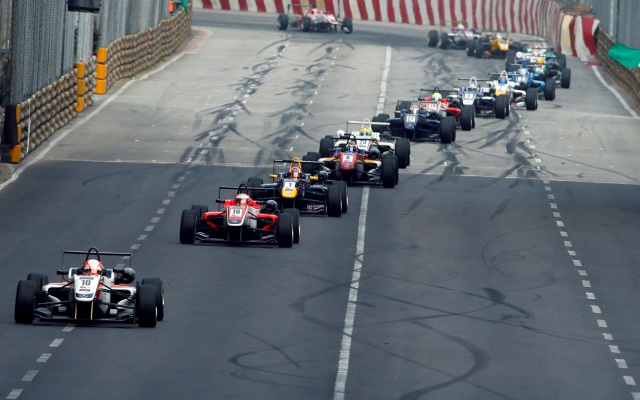 British ace boosts his standing with victory in end-of-season F3 showdown, while new star Barnicoat becomes a champion on his first day in single-seaters.

Lynn wins F3 classic, while rivals crash behind him

Alex Lynn claimed the biggest win of his career-to-date with victory in the Macau Grand Prix. After an impressive pole and third place finish on his debut at the famous end-of-season F3 race in 2012, the Englishman arrived this year amongst a number of leading contenders. He set the pace in the first practice session on Thursday but the crashed in the day’s qualifying session.

Fortunately Friday’s second qualifying would be faster and he was able to grab third on the grid for the qualifying race. Lynn’s Prema team-mate and European Champion Raffaele Marciello had had a quiet weekend up to that point but pulled a superb lap out the bag late in qualifying to claim pole ahead of his season-long rival Felix Rosenqvist.

Marciello got a poor launch though, as Lynn took the lead from Rosenqvist only to run wide moments later and give the place away again. Lynn made the most of a safety car restart to slipstream past the Swede and and edged away up front.

Starting from pole, Lynn kept the lead at the start with Pipo Derani moving up into second as Marciello and Rosenqvist made contact, forcing the latter out of the race. After another opening lap safety car, 2012 winner Antonio Felix da Costa would pass Derani for second but was unable to reel in Lynn.

Lynn’s two seasons in F3 so far have been a little on the quiet side for a highly-rated racer, but his Macau success has reminded everyone of his abilities and indicated he will be a favourite for the European Championship should he return in 2014. Felix da Costa never quite had the pace to challenge Lynn but accepted that winning with his relative lack of recent F3 mileage would be a tough ask.

Marciello also passed Derani but threw away a podium finish when he crashed at the final corner. It meant that the Italian failed to exit F3 on a high, despite proving earlier in the weekend that he had the pace to win. After fifth last year, the third place that Derani inherited further proved his progress, prior to announcing a switch to the US scene for next year. 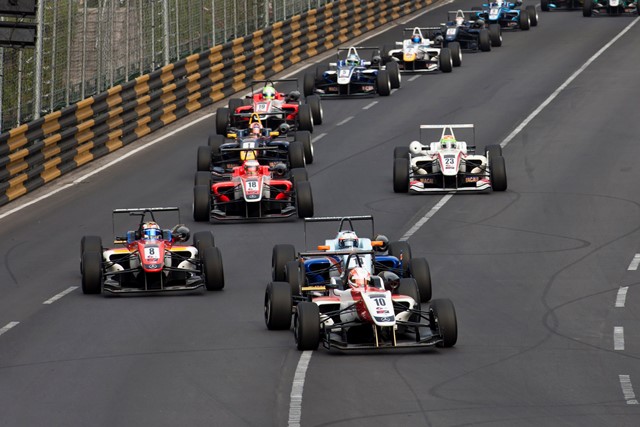 Marciello and Rosenqvist challenged Lynn at the start but collided (Photo: CGPM)

Tom Blomqvist showed good pace throughout the weekend after switching from EuroInternational’s one-car effort to a five-strong Fortec squad, and held provisional pole for much of the red-flag-affected second qualifying session. A stall and consequent collision at the start of the qualifying race relegated him to the back for the main event, but he drove well to finish eighth.?Nicholas Latifi stayed out of trouble on his debut to take ninth while Esteban Ocon completed an impressive first race weekend in a current F3 car to take tenth, despite stalling at the start.

Barnicoat wins title on his first day of single-seater racing

Ben Barnicoat finished his first day of single-seater racing with a title after winning the Protyre Formula Renault Autumn Cup at Rockingham.

The event had been trimmed from two days to just one and had a grid of only six cars, but Barnicoat still managed to outclass proven winners at this level. The Racing Steps Foundation driver won two of the day’s three races and finished second in the other to take the crown.

Barnicoat’s Fortec team-mate Hong Wei Cao claimed victory in the second race of the day after a superb outside pass at the hairpin on the opening lap. Alex Gill, karting graduate Martin Kodric and Pietro Fittipaldi also finished on the podium. 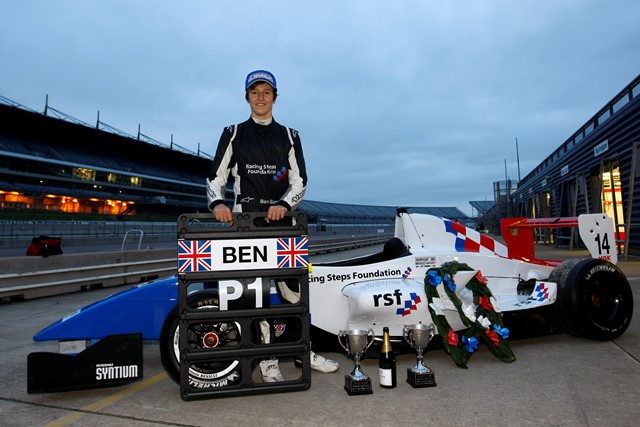 Guimaraes wraps up title with a round to spare

Second place behind de Souza in race two was enough for Guimaraes, with Raucci retiring with a mechanical issue. Riccardo Landucci completed the podium.

He got his mistake out of the way early in the weekend when it didn’t really matter and was then too fast for his rivals to handle during the races.