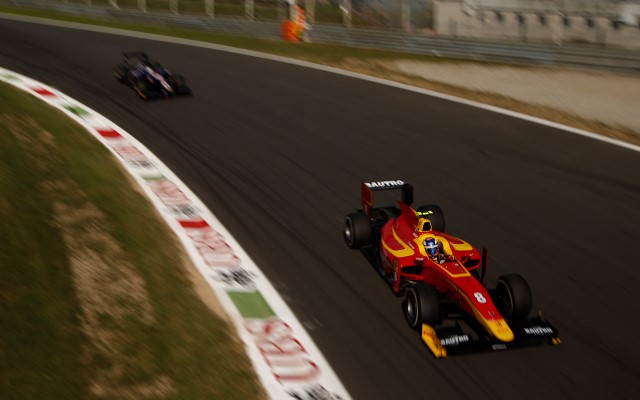 The GP2 title fight was turned on its head as the contenders’ respective recent form continued, while two drivers stayed out of trouble in GP3 to emerge as the leading contenders…

Fabio Leimer has moved into the GP2 points lead with two weekends remaining thanks to victory in the feature race at Monza. He was only sixth in the sprint race, but two bonus points for fastest lap mean he carries a six point advantage on to Singapore over nearest rival Sam Bird.

Bird had added five points to his tally by topping qualifying, and pole set him up to repeat his success from Spa a fortnight earlier. Leimer outdragged him at the start, but Bird stayed out longer on an alternative strategy and may have rejoined in the lead had it not been for a slow pitstop. In his failed attempt to catch Leimer before the end, Bird did claim the fastest lap points – only for Leimer to do the same on Sunday as Bird finished in fourth on the road.

Leimer and Bird took advantage of another faltering weekend for erstwhile standings leaders Stefano Coletti and Felipe Nasr. Coletti had brought an end to his qualifying demons by placing his car sixth on the grid, but undid his hard work when he broke the speed limit entering the pits for his stop – which was also a slow one. A mechanical issue terminated his charge back up the order. Nasr meanwhile was also forced to retire on Saturday by car dramas which followed yet another botched pitstop.

The pair spent Sunday’s race embroiled in a race-long duel but finished only 13th and 12th – Coletti?racking up his ninth non-score from the last ten races as Nasr failed to score any points in a single weekend for the first time this season. They are now 24 and 29 points adrift of Leimer respectively.

Race two saw GP2 rookie Adrian Quaife-Hobbs record his first victory after getting the jump on Alexander Rossi at the start, with the American fighting back from his poor getaway to finish second. Julian Leal completed the podium, his second top-three sprint race result in a row.

Next round: Singapore, 21-22 September

Kvyat becomes Regalia’s rival as Daly and Ellinas get eliminated 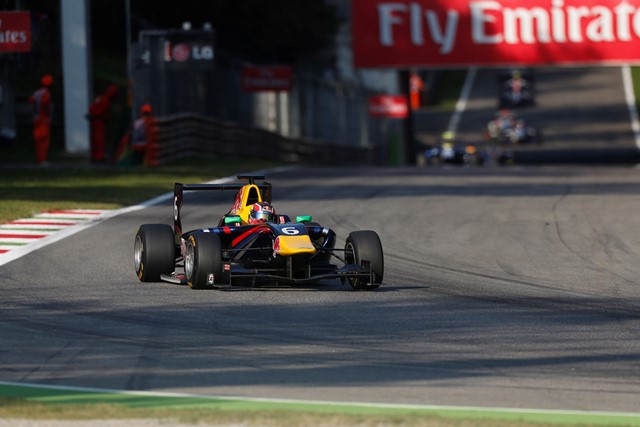 Kvyat left the rest of the field behind in race one (Photo: Andrew Ferraro/GP3 Media Service)

Daniil Kvyat has moved into second place in the GP3 standings – just seven points off the lead – with a round remaining thanks to a superb performance at Monza. The MW Arden car was the class of the field at the low downforce track from Friday practice and Kvyat took best advantage of that to claim pole and the five bonus points. That position allowed him to take advantage of a chaotic start behind him and romp away into the distance to a dominant victory – his second Saturday win in succession. On Sunday he came from eighth on the grid to second at the flag.

Facu Regalia is the man that Kvyat needs to stop in Abu Dhabi in November after maintaining his consistent form with a third and a fourth in Italy. To get the first result he had to recover from a bizarre spin arriving at the grid, but he then dodged the first corner melee ahead of him to go from eighth to fourth and eventually third. He made similar progress early on in race two to get up to second before slipping back to fourth later on.

Title contenders Conor Daly?and Tio Ellinas, as well as others, had their weekends wrecked at the first corner when Dino Zamparelli went across the grass and slid into Marussia Manor team-mate Ellinas – a move that he was suspended from race two for. Daly made the best recovery in race two to take the final point in eighth as well as the fastest lap but he is now 34 points behind Regalia in fourth place. Ellinas’ non-score leaves him sixth, a further nine points behind.

Kevin Korjus sits three points ahead of Daly in third place after maintaining his ability to stay out of trouble and collect a sixth and a fifth. Jack Harvey is fifth between Daly and Ellinas thanks to his second win of the season in the sprint race. Fellow Brits Nick Yelloly and Lewis Williamson also picked up podiums, Yelloly a distant second behind Kvyat in race one while Williamson pushed Harvey during race two before falling behind Kvyat.

Carlos Sainz enjoyed similar pace to Red Bull stable-mate Kvyat but was unable to get similar results. He only qualified sixth but quickly put that straight by following Kvyat into turn one in second place, only to get hit around into a spin by Ellinas in the chain reaction from Zamparelli’s error. He produced a strong fightback to claim ninth from the back of the field, but could only finish in the same place on Sunday.

Next round: Yas Marina, 2-3 November

Stuvik and Jones add wins to pull away in title fight

Sandy Stuvik and Ed Jones scored a win and a second place each at Spa-Francorchamps to pull away from the opposition in the F3 Open title fight. Stuvik converted pole into victory in race one to claim only his second win of the year. He put the car first on the grid again for race two but Jones got the better of him to record his fourth victory of the campaign.

Stuvik now leads Jones by eight points with two weekends remaining, with third-placed Nelson Mason a further 41 points away after a fourth and a third in Belgium. Santiago Urrutia was third in race one but rolled out of race two. That led to a mass mile-up that marred the weekend, caused as the leading cars slowed in reaction to the safety car boards and those behind failed to reduce their speed in time.

Report: Stuvik beats Jones to race one victory at Spa

Next round: Monza, 5-6 October

Fuoco gets one hand on first year crown with Mugello double 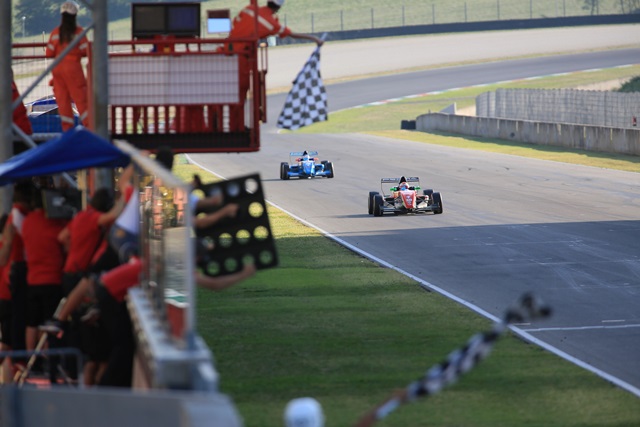 Antonio Fuoco is one point away from securing the Formula Renault Alps title in his first year of cars after a double win at Mugello put a significant gap between himself and his rivals and team-mates Luca Ghiotto and Bruno Bonifacio.

The Ferrari protege led Nyck de Vries from start to finish in both races and will now take a 49 point advantage over Ghiotto to the final round at Imola, where Ghiotto will need to score all 50 points available to deny Fuoco the title.

Next round: Imola, 5-6 October

Arriving at Magny-Cours, runaway points leader Anthoine Hubert had won at least two of the three races at each of the previous four rounds. He would be denied this time however by Jules Gounon, who claimed a superb triple win. That result more than doubled Gounon’s points tally for the season and sees the son of Jean-Marc leap from eighth to second in the standings.

Hubert however still has a 135.5 point lead at the head of the standings with only 156 points left up for grabs from the remaining weekends. He was fourth in race one but only 12th in race two after contact from another driver before finishing second to Gounon in race three.

Report: Gounon doubles up at Magny-Cours

Hughes led race one until being passed by Dalton behind (Photo: BRDC F4)

Jake Hughes will take a 45 point margin into the season finale at Donington as the wins were shared between three different drivers once again at Snetterton. No driver has yet won more than one race in a weekend of BRDC F4 and it was Jake Dalton, Jack Barlow and James Fletcher who stood on the top step in Norfolk.

Dalton’s win came in his first race after switching teams from MGR to Lanan, passing his new team-mate Hughes to claim the victory. Hughes eventually finished third behind Struan Moore.

Seb Morris had appeared to have finally won a race in the series in race two, only to have it stripped for a technical infringement. Barlow inherited the win and has leapfrogged Morris into second place in the standings as a result. Hughes and?Matthew Graham?completed the race two podium. Morris and Moore joined the dominant Fletcher on the race three podium, as Hughes finished back in eighth.

Despite Hughes’ strong margin at the top of the standings, Barlow, Morris, Graham, Charlie Robertson and Dalton are all still mathematically in contention.

Next round: Donington, 28-29 September

His team clearly had the fastest package at Monza but Kvyat was able to fully capitalise on it and enjoy a near-perfect weekend that moves him right into title contention.

Marciello and Sims quickest over Wednesday testing at Hockenheim