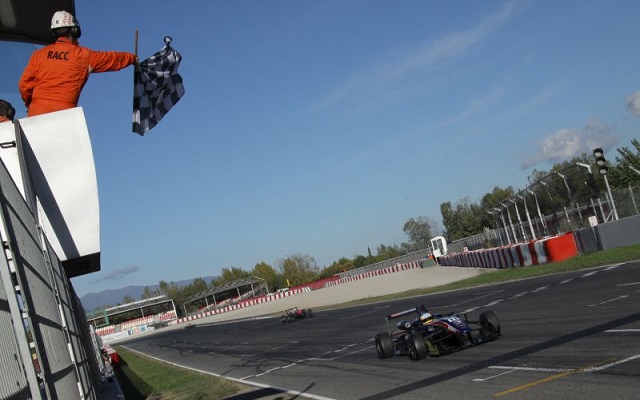 We sum up the action of a weekend, which saw the F3 Open season finale and the beginning of the BRDC F4 Winter Series…

A final round title showdown between RP Motorsport’s Sandy Stuvik and Team West-Tec’s Ed Jones saw the latter become the 2013 F3 Open champion after a nail-biting finish to race two of the weekend.

Despite not leading the standings coming into Catalunya, Jones seemed to be the title favourite due to the points system incorporating the rule of dropped scores. While his chief rival Stuvik has not finished outside of the top five all year and was set to lose two fifth places, Jones would retain all of his tally, having been absent from the season opener due to clashing commitments in the Eurocup Formula Renault.

The youngster from UAE confirmed his title ambitions on Saturday, taking a commandeering pole position in qualifying by 0.4s over second-placed Alexandre Cougnaud. Meanwhile, his Thai rival had a nightmare session, lining up all the way down in eighth.

In race one, Jones held on to the lead from pole and was comfortably in first for the majority of the race. In the closing stages, he came under pressure from RP Motorsport’s Santiago Urrutia, but the Uruguayan ran out of laps before he could mount a serious challenge.

As such, Jones took the win ahead of Urrutia and Cougnaud, taking over in the lead of the championship. Alex Toril took fourth, while Stuvik fought his way up to fifth, which matched his two worst prior results. 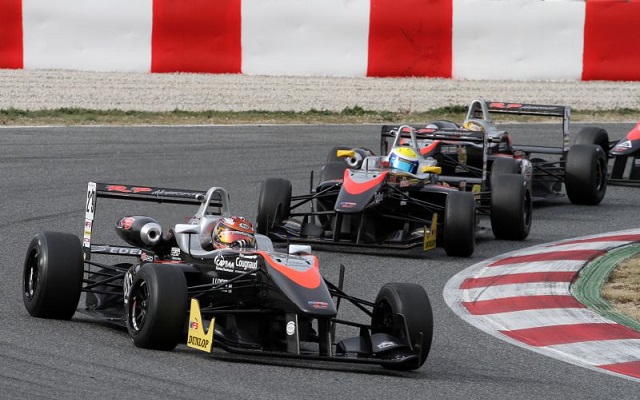 Having narrowly missed out at Monza, Cougnaud took his maiden win in the series finale (Photo: FOTOSPEEDY)

Sunday seemed to be following the same script early on, as Jones took pole (with his Thai rival on the front row this time) and made a good start to begin storming away from the field. It turned out he might have been a little too eager in doing so, as he took too much life out of his tyres and was in for a drastic drop in pace in the closing minutes of the race.

Firstly, it was Cougnaud who got through, the Frenchman now in prime position to take his first win in the series. Jones was then overtaken by Stuvik, Urrutia and his teammate Nelson Mason. For the 18-year-old, fifth would prove sufficient for the title regardless of Stuvik’s finishing position and, in the end, he narrowly held on to that very result.

In the final standings, Jones led Stuvik by nine points, while his teammate Mason narrowly held on to third ahead of Urrutia. Toril and first-time winner Cougnaud rounded out the top six.

In the Copa class, things were less dramatic, as Richard Gonda calmly secured the title in the first race.

Report: Jones gets closer to title with Catalunya race one victory

Graham, Cook score two wins each in the series’ first round 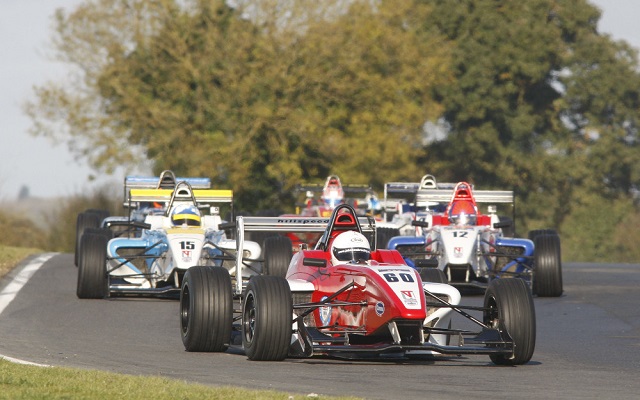 Just like the main championship, the BRDC F4 Winter Series is looking to have a very close title fight (Photo: BRDC F4)

The BRDC F4 Winter Series kicked off at Snetterton with four races in customary difficult weather conditions, with two drivers dominating a day of the weekend each.

On Saturday, Matthew Graham was the star, topping the qualifying session and then winning races one and two, despite the fact that he had to recover from poor starts on both occasions. In race one, he had to see off the challenge from Falco Wauer, who eventually finished second, with Sennan Fielding rounding out the podium. In race two, Graham rejoined the lead after an action-packed first few laps, eventually cruising to the flag ahead of Fielding and Pietro Fittipaldi.

On Sunday, it was Jake Cook‘s playground, with the Protyre graduate demonstrating his ambitions with stellar pole position in qualifying after a difficult first day. The Hillspeed driver also had a tough start from pole, but was back into the lead after Fielding and Graham made contact in the fight for first. From that point on, it was smooth sailing for Cook, who took the win ahead of Wauer and Matteo Ferrer. In race two, meanwhile, he made a good start and enjoyed a fairly straightforward drive to victory, as Wauer and Will Palmer completed the podium.

After a roller-coaster first round, it’s all to play for in the second and final outing at Brands as Graham leads Cook and Wauer by just two points.

Report: Graham doubles up with win in wet second race

Next round: Brands Hatch, November 23-24 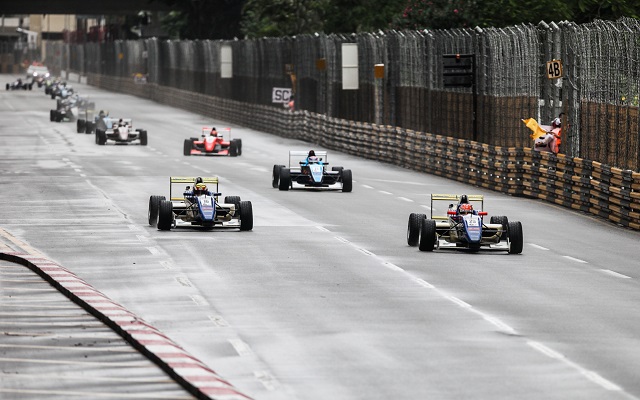 After practice pacesetter and series champion Aidan Wright binned his car in qualifying, the road was clear for the KCMG duo to run the show, with their intentions confirmed in qualifying as Nandy took pole ahead of Dan Wells.

In the rained out race, Nandy and Wells were in a league of their own, establishing a huge gap in the seven laps of green flag racing. The Briton appeared to have a good shot at victory, but could not find a way past Nandy, settling on second behind the triumphant Malaysian.

Shaun Thong managed to keep multiple challengers at bay to take third, ahead of Ren Nagabuchi and Tanart Sathienthirakul. Having started last, Wright wound up recovering to ninth place.

Jones and Cougnaud looked to be the team leaders of their respective squads this weekend and, in the end, it was the Frenchman who managed to podium on both occasions. His victory in race two served, finally, as fair culmination of a season’s hard work.