Portuguese driver moves into title contention after becoming the first double winner in GP3 history. In GP2 there were wins for Max Chilton and Esteban Gutierrez…

Aaro Vainio was the man to beat in practice in qualifying, but a poor start from pole gave Antonio Felix da Costa the chance to take the lead and an unchallenged victory. Daniel Abt took second after race-long pressure from points leader Mitch Evans, while Kevin Ceccon got ahead of Vainio to take fourth. Conor Daly, Matias Laine and David Fumanelli completed the top eight.

Laine took the lead from teammate Fumanelli at the wet start to race two, but Fumanelli crashed out a few corners later in the tricky conditions. Daly and Vainio chased Laine for the lead, but Tamas Pal Kiss and Felix da Costa wisely changed to slicks from fourth and fifth as the track dried. Felix da Costa then got ahead of Pal Kiss and charged through the field to take a historic double win. Patric Niederhauser‘s gamble on slicks at the start worked to his advantage and he passed Pal Kiss for second at the very end. Local hero Pal Kiss made it on to the podium but was later penalised for crossing the white line on pit exit, giving third to Alex Brundle, another to start on slicks. Tio Ellinas and Lewis Williamson took fourth and fifth, with Laine and Vainio falling to sixth and seventh on their wets. Evans meanwhile finished 21st after two spins.

Two rounds remain in Spa and Monza, with Evans leading Vainio by 17 points and Felix da Costa another 17 behind.

Esteban Gutierrez won the sprint race from pole position, ahead of fellow front-row starter Nathanael Berthon. Van der Garde held third for much of the race but fell to tenth on worn supersofts, as Razia made it a double podium-scoring weekend in third ahead of his rival Valsecchi. Palmer took sixth just ahead of Calado, with Rio Haryanto seventh and Felipe Nasr eighth after starting on the back row of the grid.

Seven points separate Razia and Valsecchi, with three weekends in Spa, Monza and Singapore to come in September. 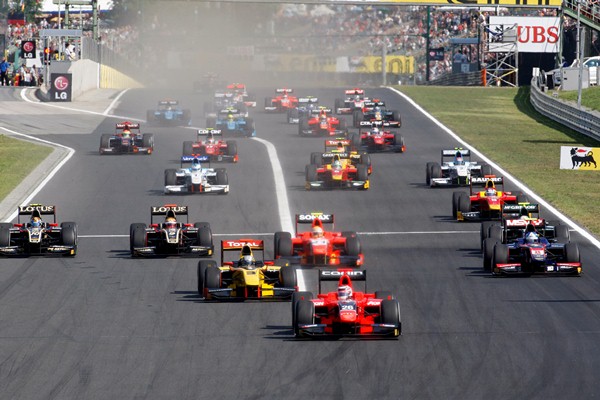 British F3 headed to Spa, joined by the top European runners for the latest leg of the FIA European Championship. Felix Serralles claimed a double pole position, and won the first race despite slipping behind Carlos Sainz at the start. The Puerto Rican finished five seconds ahead of Daniel Juncadella who took second from fellow Spaniard Sainz. Jack Harvey took fourth ahead of rival Jazeman Jaafar, with Alex Lynn in sixth. The reverse grid second race was cancelled due to heavy rain.

Serralles kept the lead initially in the wet final race but was passed by Sainz before spinning and dropping to third behind Tom Blomqvist.? Jaafar was fourth ahead of Michael Lewis and Harvey.

That result gave Serralles the points lead, four ahead of Harvey and another four ahead of Jaafar. Just three weekends remain, the first of which is at Snetterton next weekend.

Raffaele Marciello finished both races outside of the points after a difficult weekend, but he retains the European points lead, just 3.5 ahead of teammate and rival Juncadella who was eighth in race two with Sainz now just a further ten behind.

JKRAS joined British F3 in Spa for the second part of its European jaunt, with Nabil Jeffri winning the first race from pole ahead of Irfan Ilyas and Aston Hare. Hare won the second race ahead of pole-sitter Jeffri and Caterham development driver Weiron Tan. Jeffri heads Hare by 12 points, with the next round coming in support of the Singapore Grand Prix.

Another Formula BMW-based series, and another Caterham junior driver in the form of Matt Parry won two of the the three races at Thruxton to extend his points lead.

PaddockScout Driver of the Weekend: Antonio Felix da Costa – a supreme performance from the recently-recruited Red Bull Junior brings him into title contention.

Next weekend: The tight British F3 title battle continues at Snetterton, while the Italian and German series are in action in Austria and the Netherlands respectively.