Daniel Abt recorded his first GP3 victory in a shortened first race at Spa, following a crash from Robert Cregan. Matias Laine took the lead at the start but out-braked himself at Les Combes, handing the lead back to teammate, pole-sitter and points leader Mitch Evans. Evans was then passed by Antonio Felix da Costa, and as the Portuguese driver defended from the Kiwi, Abt dived past both of them and into the lead shortly before the race was stopped.

A good opening lap from Tio Ellinas gave him fourth after starting tenth, finishing ahead of Laine, title contender Aaro Vainio, Conor Daly and Lewis Williamson. Half points were awarded with the race only lasting four laps.

Laine made another good start to race two to move into the lead and go on to take his first GP3 win, with Felix da Costa climbing to another second place ahead of Daly. Alex Fontana was fourth ahead of Abt, Patric Niederhauser, Williamson and William Buller.

Vainio dropped to the back after contact from Ellinas at Les Combes on the opening lap put him in a spin, but he ended up finishing in 14th, one place ahead of Evans who struggled badly with pace and fell backwards during the race.

Evans continues to lead the points on 147.5, with Felix da Costa up to second on 126 ahead of Vainio on 123. Abt remains in mathematical contention on 112.5. Next weekend sees the final two races of the season at Monza. 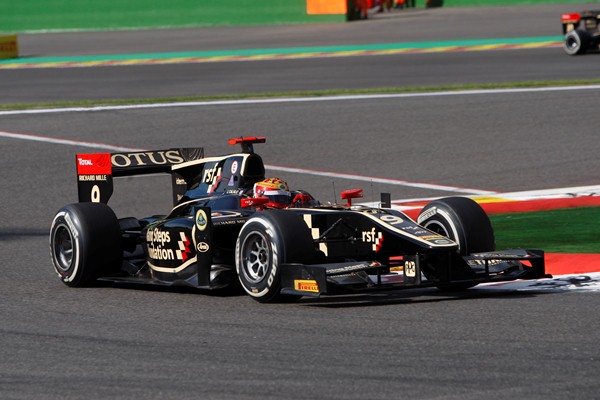 Marcus Ericsson ended a two-year win drought in the feature race at Spa, after Rio Haryanto managed to spin and stall on fresh tyres under a safety car period. James Calado was second ahead of Davide Valsecchi, Josef Kral, Giedo van der Garde and Luiz Razia – who fought back after starting 18th. Julian Leal was seventh while Felipe Nasr stole eighth and the reverse grid pole on the line.

The race was stopped for around an hour following a heavy crash for Nigel Melker at Radillon, with subsequent delays for the repairing of the barriers and lack of medical helicopter. The Dutchman escaped serious injury.

Kral made a lightning start to the sprint race to go from fifth to first at the start and go on to record his first GP2 win – that after failing to score a single point in 2012 before the feature race. Nasr again took a position out of the final corner – this time second place from Calado. Ericsson, Fabio Leimer and Stephane Richelmi completed the top six.

Razia and Valsecchi both failed to score after being involved in a first-lap incident on the Kemmel Straight. Razia was looking for second on Calado but ended up on the grass and spinning across the track, collecting Valsecchi. They are now tied for the points lead on 204 points, with Calado up to third on 160 ahead of Esteban Gutierrez on 150 after an incident in each race for the Mexican. Monza hosts the penultimate weekend of the season.

Riccardo Agostini won the first race at Imola on the road but was then disqualified for an irregularity with his car. Henrique Martins inherited the win ahead of Kevin Giovesi and Sergey Sirotkin. Eddie Cheever started from pole, but was beaten into the lead by teammate Brandon Maisano. Cheever then made contact with Maisano that caused Cheever to retire. Maisano finished eighth.

Giovesi won the second race after getting the jump on Agostini at the start. Maisano was third with Cheever fourth. Giovesi won again in race three ahead of Nicolas Latifi and Sirotkin. Agostini was fourth, Cheever fifth and Maisano only tenth.

The championship battle is now finely balanced, with Cheever on 202 points, Maisano on 199 and Agostini on 194. The penultimate weekends takes place at Vallelunga on 15/16 September. 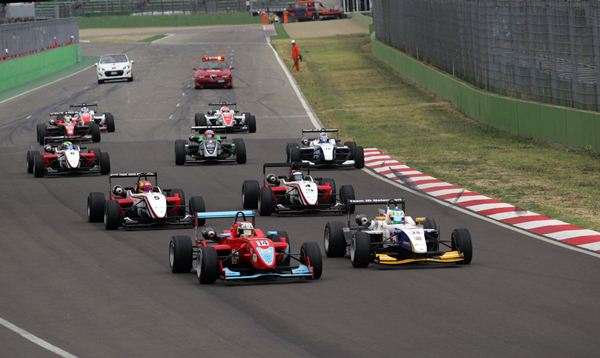 Championship leader Bruno Bonifacio started the first race at Imola from pole, but was hit out of the lead by Santiago Urrutia. Luca Ghiotto inherited the lead and the race win ahead of Nicolas Costa and Venezuelan female driver Samin Gomez. Ghiotto doubled up in race two from pole, ahead of Bonifacio and Costa. Emanuele Zonzini got his first win in race three ahead of Costa and first-time podium finisher Gregor Ramsay. Ghiotto was sixth while Bonifacio was ninth after contact at the start.

Ghiotto now leads the standings on 210 points with Bonifacio on 205 and Costa on 190 ahead of the penultimate round at Vallelunga.

Formula Renault Alps resumed after more than two months away, at Spielberg in Austia. Red Bull Junior Daniil Kvyat finished the weekend with victories in both races. He won the first race from fifth on the grid, leading home Frenchmen William Vermont and Esteban Ocon. Polesitter Victor Franzoni was fourth, ahead of a best-yet fifth for Red Bull’s Alexander Albon.

Kvyat won again in race two ahead of Melville McKee with Ocon on the podium again in third. Franzoni again finished fourth from pole, ahead of Patrick Kujala and points leader Norman Nato, who was only tenth in the first race.

Kvyat is now just three points behind Nato, while Paul-Loup Chatin has dropped to 24 points off the lead after a 14th and a 12th from the two races. Two weekends remain, the first of which is at Mugello on 6/7 October. 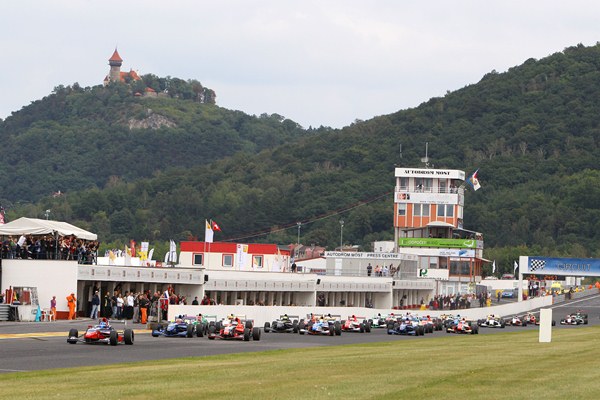 Josh Hill won the opening race of the weekend at Most ahead of fellow Brits and title rivals Jordan King and Jake Dennis. Hill led race two until he retired with a technical failure, handing the lead back to Dennis. He then struggled with a broken front wing, allowing Jeroen Slaghekke to come through and score his first Formula Renault win ahead of Gabriel Casagrande and Dennis. Dennis however was penalised for a move on Jordan King, elevating King to third and dropping Dennis to seventh. There was another first-time Dutch winner in race three when Steijn Schothorst led from start to finish ahead of Alessio Picariello and King, with Dennis fourth.

Despite finishing behind King in all three races, Dennis continues to lead his rival comfortably – 306 points to 255. The penultimate weekend of the season takes place at Zandvoort on 22-23 September.

PaddockScout Driver of the Weekend: Daniel Abt – Fast all weekend and made a fantastic overtaking move to claim his first victory. Only prevented from doing better in race two by an incident ahead of him.

Next weekend: GP3 in Monza – where the slipstreaming always makes for great racing in GP3, and the title needs to be decided. Stay tuned to PaddockScout.com and @PaddockScout for the latest.