No driver on PaddockScout’s radar is in such rich form at the moment as Felix da Costa. The Portuguese ace followed up his double win in Hungary with two second-places in Spa. Okay he could have won the first race, and in fact he really could have done had it gone the full distance. He’s now the closest man to points leader Mitch Evans going to Monza, where he won last year. A repeat performance this weekend wouldn’t be a surprise, though he’s going to need Evans to hit trouble to take the crown.

Spa was one of the British star’s best GP2 weekend’s yet. Second in the feature race, he was set for the same result in the sprint race before getting robbed by Felipe Nasr on the line. For a rookie to score a double podium and yet be left wondering whether he could have won both races proves how well he’s been doing. He’s kept himself in with an outside chance of the title, but finishing third to series veterans would seem like a championship anyway.

In 2007, Marcus Ericsson and Josef Kral were fighting each other for the Formula BMW UK title as 16-year-olds. They were reunited when they graduated to GP2 in 2010 with the Super Nova team, but 2012 has been a bit of a disaster for both of them. Ericsson was an expected title contender, but before Spa he hadn’t won a race for more than two years. Kral meanwhile was driving for top team Addax, but had managed to not score a single point in 2012. In Belgium they brought memories of 2007 flooding back with a convincing victory each. 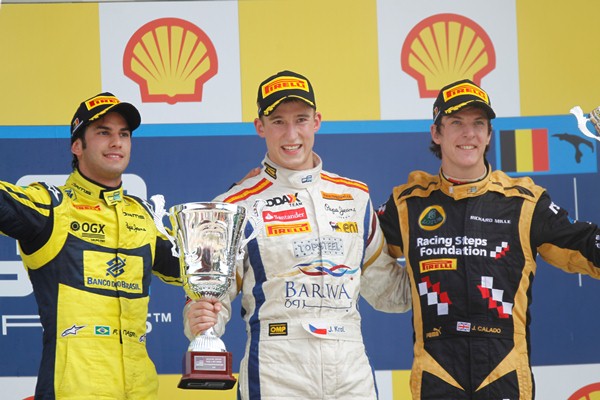 It probably shouldn’t have taken most of the season for Daniel Abt to get his first GP3 win but that’s what he achieved in Spa, and what a way to do it. He looked set for pole position during qualifying before Evans pulled one out of the bag, but then clung on to Evans and Felix da Costa during the opening laps of the first race and when they were fighting he saw his opportunity and pulled off one of the passing moves of the year to take the lead and ultimately the win. His race two podium chances were thwarted by the Ellinas-Vainio contact ahead of him on lap 1.

Spa saw the Brazilian GP2 rookie produce two more great performances. A clutch issue in his pitstop dropped him down the order in the feature race before producing another of his almighty comebacks, stealing eighth place and the reverse grid pole with a better drive out of the final corner. Sadly another poor launch saw him waste that starting position and lose the chance of a maiden win, but he held on to his tyres better than Calado and again took a place coming out of the final turn to finish second and get his fourth podium of the year – only the championship top five have had that many.

Melker boosted his stock the week before Spa with a podium in awful conditions on his FR3.5 debut. Fast forward seven days and he was in hospital after a frightening-looking high-speed shunt after losing control of his car at Eau Rouge. Thankfully he escaped serious injury and should be racing again this weekend in Monza. 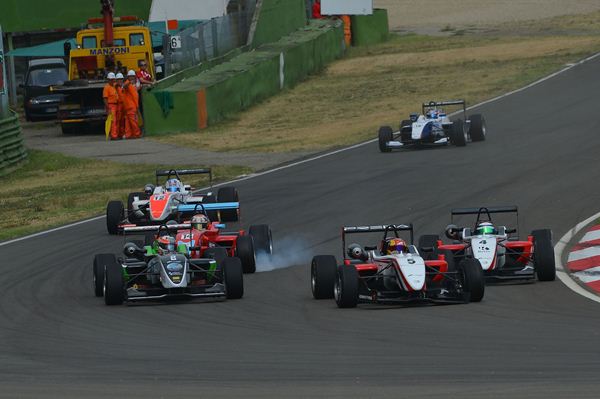 Cheever (#4) got too close to Maisano (#5) and ruined his weekend (Photo: acisportitalia.it)

After leading for most of the season, Eddie Cheever was dethroned as points leader in Italian F3 after going without a podium at Imola. He started from pole in the first race, but after being passed for the lead by rival and teammate Brandon Maisano he made race-ending contact with the Ferrari youngster. On the back foot for the later two races, he finished them in fourth and fifth. Fortunately Maisano and Agostini didn’t have their best weekends either, so everything’s still close.

After his victory in Monaco that marked his arrival as a promising name for the future, Vainio’s GP3 campaign has fallen apart a little, and is now only an outsider in this weekend’s Monza finale. Spa was a disappointment, starting with sixth in race one before he was rather unfairly spun around on the first lap of race two following contact from Tio Ellinas.

Like fellow Prema driver Cheever, not the best of weekends at Imola for Formula Abarth racer Bruno Bonifacio. Also on pole for his first race, he was knocked out of the race by Santiago Urrutia. He managed a second place in race two, but more contact in race three after starting at the back saw him only finish ninth. That drops him behind Luca Ghiotto in the points with two weekends to go.

After being unable to make use of a good start to the Spa feature race when Rio Haryanto forced him onto the grass, Gutierrez later lost his head a little when he passed James Calado under yellow flags, for which he was later penalised once he had already dropped to the back of the pack when Lotus queued him behind Calado in the pits. Was mounting a sprint race fightback when he got impatient behind fourth-placed Julian Leal and ended up having the door shut on him.