Home Featured Roundup: All the winners (and losers) from a busy weekend
Roundups

Roundup: All the winners (and losers) from a busy weekend

Davide Valsecchi entered the Valencian weekend of the GP2 Series season with a 31 point lead over nearest rival Luiz Razia, but a nightmare weekend for the Italian and a double podium for the Brazilian means the two series veterans have just a point between them as the series hits its midway point.

If that was one big talking point of the weekend, another is the fact that James Calado left the weekend without standing on top of the podium.

The cream rose to the top in terms of raw talent in qualifying on Friday, when Calado edged out fellow rookie Felipe Nasr for pole by 0.007s, while Esteban Gutierrez took third. That was until he and fourth-place qualifier Valsecchi were relegated to the third row by penalties for impeding others.

Calado held the lead at the start of the race and quickly built up a comfortable advantage, but was robbed of victory when the safety car came out in front of him when all the other frontrunners had been able to make their mandatory pitstop. In a chaotic race with some suspect driving standards – particularly amongst the lesser-talented tailenders, there were three safety car interventions, with Calado eventually coming in at the third and final time.

At this point he handed the lead and the victory over to his Lotus GP teammate Gutierrez, but only after the Mexican had forced his way past some others. He hit Giedo van der Garde from behind under braking early in the race, and then forced Fabio Leimer wide at the second restart fighting for second behind Calado, allowing Razia to get ahead briefly. Marcus Ericsson finished second behind Gutierrez with Razia third and Leimer fourth. Rio Haryanto was fifth, ahead of Nathanael Berthon, Max Chilton and Calado, who claimed reverse grid pole after Valsecchi was penalised for overtaking under the safety car.

Race two was a battle between Calado and Haryanto for much of the race, until the two collided as Haryanto moved for the lead. He ended up in the wall and out of the race, while Calado was struggling. Leimer tried to get by on several occasions and as the two of them fought down at the hairpin on the final lap, Razia nipped around the outside of both to steal victory. He had been down in sixth place for the majortiy of the race before storming through in the last couple of laps.

A turn two collision between Berthon and Ericsson saw the latter in the fence, with Gutierrez, Stefano Coletti and Valsecchi then running into the stranded Swede. A point-less weekend for Valsecchi brings Razia to within a point, while Gutierrez’s retirement handed third place to Calado, 45 points off Razia. Chilton and van der Garde also jumped the Mexican, with all three within eight points of Calado. Round seven of 12 takes place at Silverstone in two weeks’ time. 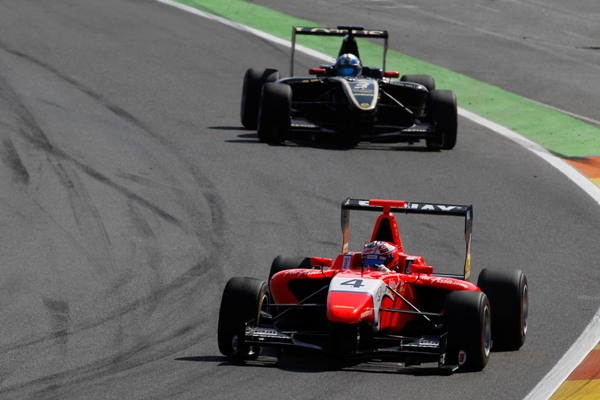 Evans moved back ahead of Vainio in the GP3 title battle (Photo: GP3 Media Service)

Pre-season favourite Mitch Evans won the first of the GP3 races at Valencia, beating Aaro Vainio to move back ahead of the Finn in the points. The two were in a class of their own, finishing well clear of David Fumanelli who got the better of Tio Ellinas to take third place. Matias Laine was fifth, Daniel Abt sixth, Kevin Ceccon seventh and Patric Niederhauser eighth.

Formula Abarth Italian champion Niederhauser held the lead from reverse grid pole until the finish of Sunday’s race, with Abt in second. Ceccon was set for third until being pushed out of the way at the final corner by Ellinas, who was subsequently demoted to fifth behind Laine and Ceccon. Evans beat Vainio to sixth after Vainio ran wide, while Antonio Felix Da Costa came through the field from last to eighth.

Evans leads Vainio by four points, with 32 points back to Abt in third and a number of drivers close behind him. The end of the Silverstone weekend will mark the halfway point of the season.

It was Jack Harvey‘s weekend at Brands Hatch as the Racing Steps ace continues his assault on the British F3 title. After starting from pole in the first race, he kept Carlin teammate and points leader Jazeman Jaafar at bay to win the first race. Alex Lynn was third, ahead of Carlos Sainz Jr, Harry Tincknell and Felix Serralles.

Pipo Derani won the reverse grid second race after fending off Fortec teammate Serralles, while Pietro Fantin and Sainz were third and fourth. Polesitter Fahmi Ilyas was fifth, ahead of fellow Malaysian Jaafar.

Harvey completed a double victory in race three, this time with a comfortable margin of nine seconds over Jaafar. Tincknell was third just ahead of Lynn with Fantin fifth and Nick McBride in sixth. A first corner collision between Sainz and Serralles put Sainz out of the race.

Jaafar maintains his points lead, but Harvey is now only seven points behind. Sainz has fallen 37 points off the lead in third place. The drivers now head to Germany to take part in the European round at the Norisring this weekend. 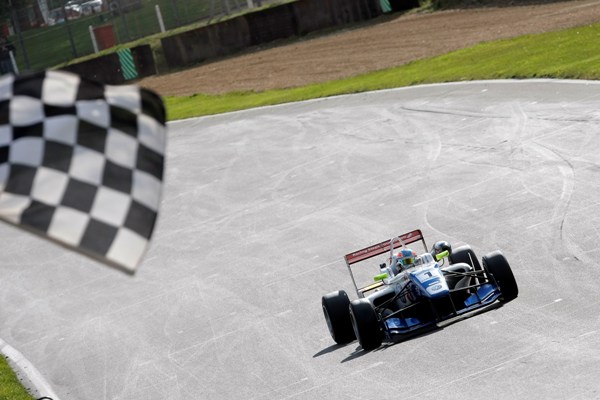 German driver Markus Pommer took his first F2 victory with a comfortable win from pole in the first of the two F2 races at Spa-Francorchamps. Daniel McKenzie was second, while Matheo Tuscher took third after a brave move on Mihai Marinescu. Christopher Zanella was fifth, with series debutant Vittorio Ghirelli coming sixth. Points leader Luciano Bacheta ended up in the barrier on the Kemmel Straight on the first lap after trying to avoid the spinning Kevin Mirocha, who had been forced onto the grass trying to take Marinescu for third.

Race two took place in atrocious conditions, with the race eventually being red flagged, the result declared after three laps and half points awarded. Bacheta had led from pole, with Pommer second and Mirocha third – even though he was taken out by fourth-placed Zanella under the safety car before the stoppage. Alex Fontana was fifth with Ghirelli again sixth.

Bacheta heads the points on 138.5, 140.5 ahead of Zanella and the chasing pack. The second half of the season begins at Brands Hatch on 14-15 July.

Gianmarco Raimondo won the first of the F3 Open races at Spa, ahead of polesitter Mans Grenhagen and Niccolo Schirio. Grenhagen returned the favour in the second race, beating Raimondo who this time began the race on pole. Schirio was again third.

Raimondo heads Grenhagen by six points at the top of the standings, with Schirio the next nearest a further 36 behind. Brands Hatch is next up for them too.

Formula Renault Alps joined F2 and F3 at Spa for the fourth round of the season. Red Bull Junior Daniil Kvyat won the first of the two races, ahead of Paul-Loup Chatin and Brazil’s Guilherme Silva. Race two saw Lotus iRace driver Oscar Tunjo score his first win in Renaults, ahead of points leader Norman Nato and Chatin.

Nato had led much of the opening race before slipping behind Kvyat and then retiring, but still leads the points on 142 points, with Chatin on 127 and Kvyat, who was tenth in the second race, third on 97. There’s a break now until round five of seven at the start of September at Spielberg in Austria.

Vandoorne leads De Vries and the rest of the field (Photo: Chris Schotanus)

The other of the regional Formula Renault categories in Europe was in action at the Nurburgring, for round two of their eight round season. Stoffel Vandoorne dominated the weekend, winning both races from pole position and setting two fastest laps. In the first race Jordan King took second, ahead of Pierre Gasly. In race two, Nyck de Vries took second place ahead of teammate Andrea Pizzitola.

Vandoorne has extended his lead to 25, with Jake Dennis still second despite only finishing 12th and seventh in the two races. King and Pizzitola are close behind, with Oschersleben hosting round three on 5-8 July.

Round three of the French F4 Championship took place at the Val de Vienne circuit, and was dominated by Alexandre Baron. The All Road-managed driver scored his third and fourth wins of the season in the two races to extend his points lead. Enzo Guibbert and Simon Tirman completed the podium in the first race, with Simon Gachet and Tirman on the podium in race two.

Baron’s nearest rival coming into the weekend Victor Sendin was 14th in race one and then retired from race two, causing him to slip to fifth in the points behind Gachet, Tirman and Guibbert. Baron’s lead stands at 42 points, with round four at Magny-Cours on 14-15 July.

PaddockScout Driver of the Weekend: A number of contenders for this one, but Jack Harvey‘s performance at Brands Hatch was particularly impressive, bringing him closer to the points lead, even though Jaafar didn’t let him have too many points.

Next weekend: It’s all eyes on Germany. There’s FR3.5 and Eurocup FR2.0 in action at the World Series by Renault’s visit to the Nurburgring, while the British and European F3 contenders descend on the Norisring.