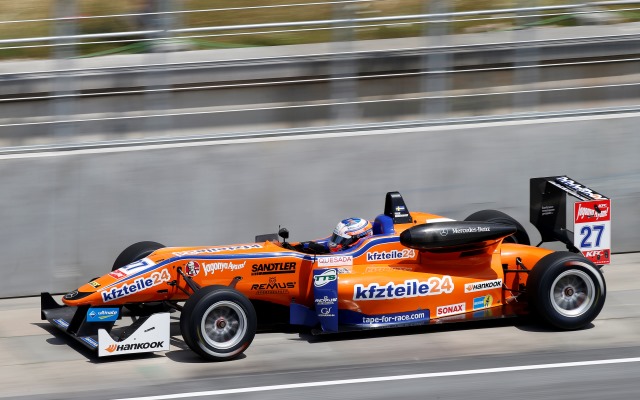 Felix Rosenqvist pulled a last-gasp lap out of the bag to narrowly deny FIA F3 European Championship star rookies Esteban Ocon and Max Verstappen in first qualifying at the Norisring.

Rosenqvist was just 0.003 seconds quicker than Ocon, with Verstappen also within 11 thousandths of a second of the experienced Swede.

Spa triple winner and practice pace-setter Verstappen had led much of the session. He was the first driver to dip below the 49-second mark and then gradually improved his time to remain ahead, knocking it down to a 48.093s with about five minutes left.

Championship leader Ocon had had a rather quiet session up to that point, but managed a 48.085s with a few minutes left to move up from fifth.

Rosenqvist had been in a close battle with Tom Blomqvist and Lucas Auer for much of the session over third, but managed a late improvement of 48.082s to claim pole position. It was the first time the Swede had topped qualifying in this, his fourth season at this level.

Blomqvist finished up fourth ahead of Auer, while Roy Nissany ended an impressive day in the third Mucke entry by claiming sixth.

Spa podium finishers Jake Dennis and Gustavo Menezes were both within 0.007s of the Israeli but will have to make do with places on the fourth row, with Mitch Gilbert beating Jordan King into ninth.

25 of the 26 drivers were covered by less than a second.