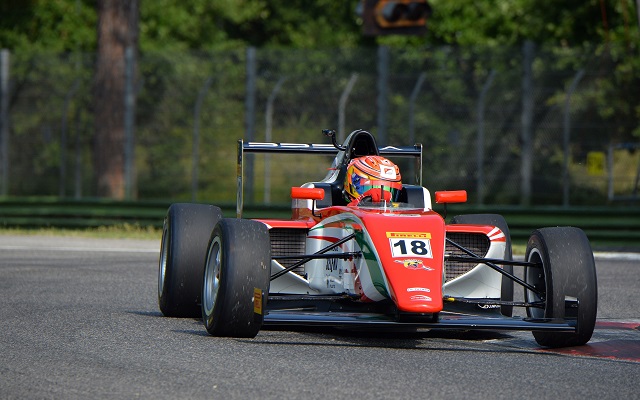 Ferrari Driver Academy member Lance Stroll was quickest overall over the first two practice sessions on Friday, in the second round of the 2014 Italian F4 Championship season at Imola.

The 15-year-old Canadian was pipped by Brandon Maisano in the closing stages of the morning session, but managed to beat his Prema teammate in the afternoon. The 21-year-old Frenchman, who is eligible only for the Trophy Class, managed to once again improve by a big margin in the session, but fell short of Stroll by 0.018s.

Championship leader Andrea Russo was the best non-Prema driver in third, ahead of fellow Italians Mattia Drudi and Matteo Cairoli. Euronova driver Leonardo Pulcini?ended up sixth, and was the last driver to clock in a time in the 1:48s.

In the afternoon session, Drudi was the top non-Prema driver in third, over six-tenths behind Maisano. Pulcini edged ahead of Russo for fourth, while Matveev was sixth quickest, ahead of Bandeira and Cairoli. The Malta Racing duo of Keith Camilleri and Vieira completed the top ten.

Italian driver Andrea Fontana returned to the series with the 11th-best time overall, after having missed the first round due to an illness, where he had been replaced by eventual race 2 winner Ukyo Sasahara. Meanwhile, Indian driver Mahaveer Raghunathan has joined Cram Motorsport (racing under the guise of F & M S.R.L) from the Imola round onwards and took 15th on his debut day.