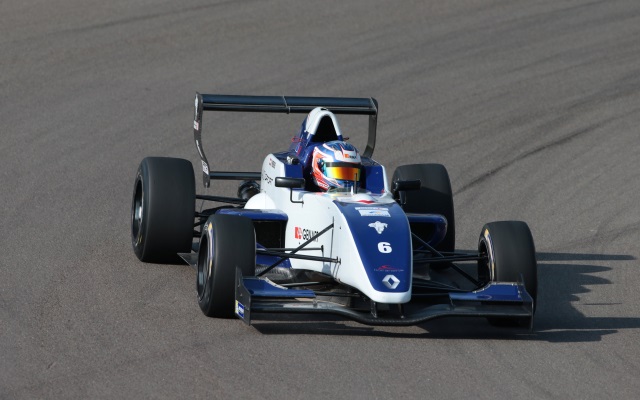 The top two drivers in the Formula Renault 2.0 Alps standings set the fastest times in practice ahead of round three at Spielberg.

Local driver Stefan Riener posted the best time of the day early in the first session, prior to rain arriving.

His time of 1m31.754s was 0.061s ahead of second-placed Koiranen team-mate Jake Hughes. JD Motorsport drivers Matevos Isaakyan and Thiago Vivacqua were third and fifth respectively and split by another Koiranen racer Jack Aitken, who leads the standings by nine points over Riener.

A second off the pace in sixth was Koiranen Eurocup racer Anton De Pasquale as he makes his first Alps appearance.

Competing at Spielberg for the first time ahead of the F3 round there at the start of August, the Frenchman was seventh in first practice ahead of Philip Hamprecht, James Allen and Daniele Cazzaniga.

The track was in the process of drying in the second session, where Aitken took the best time on his final lap but was four seconds slower than Riener’s earlier benchmark. Allen and Isaakyan also improved on their last laps to push Riener down to fourth.

A bumper Koiranen entry of seven cars dominated the top 10, with Hamprecht fifth ahead of Bruno Baptista, de Pasquale and Hughes. Cram’s Matteo Ferrer was ninth ahead of the slowest of Koiranen’s entries, Matt Parry.

The 2013 NEC champion is another getting a first taste of Spielberg, where the next GP3 round takes place in a month’s time. He previously did an Alps round with his GP3 squad Koiranen at the 2013 finale at Imola, making the podium in race one.