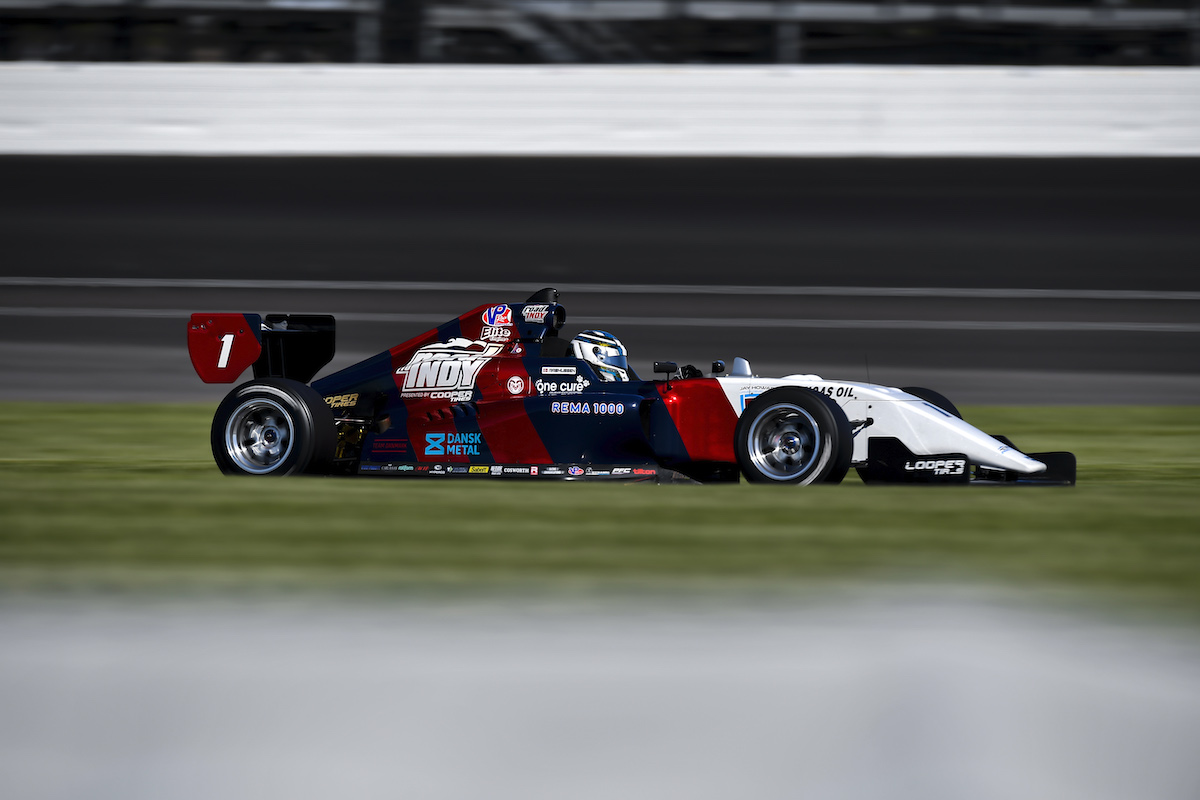 Christian Rasmussen beat Braden Eves on a restart to win the first Indy Pro 2000 race of the weekend at the Indianapolis road course.

Juncos Racing’s Reece Gold started on pole but was overhauled by Exclusive Autosport driver Eves and Jay Howard Driver Development’s Rasmussen on the run down to the first corner.

Eves’ gap to Rasmussen was often around the one-second mark, as Rasmussen found himself regularly under pressure from Gold behind.

A caution period for RP Motorsport’s Enaam Ahmed coming to a halt on the front straight nullified any advantage Eves had.

On the restart lap, with five of the 25 laps to go, Rasmussen was able to get by Eves on the run to Turn 7 down the back straight as the leading trio went three.

Rasmussen was able to sweep around the outside to go into the lead. Eves tried to get by on the circuit where he crashed heavily last year, including into the final braking zone, but was denied by less than a tenth of a second.

Gold rounded out the podium, just behind the leading pair and just ahead of team-mate Kyffin Simpson.

Simpson was involved in opening lap contact that hampered a number of drivers including team-mate Manuel Sulaiman, who dropped towards the rear of the order. Pabst Racing’s Hunter McElrea and JHDD’s Wyatt Brichacek came off worse and needed to pit for repairs.

All three finished down the order, as the latter two were lapped, and Sulaiman climbed back up the order only to be penalised post-race for blocking.

Exclusive Autosport’s Artem Petrov was often scrapping for positions but made up places towards the end to round out the top five.

Abel Motorsports’ Jacob Abel, Pabst’s Colin Kaminsky and Turn 3 Motorsport’s James Roe eventually rounded out the top eight having battled for much of the race.

In addition to Ahmed hitting woes, Miller Vinatieri Motorsports’ Jack William Miller also had issues having pitted late on after running mid-pack. He finished two laps down in 12th.