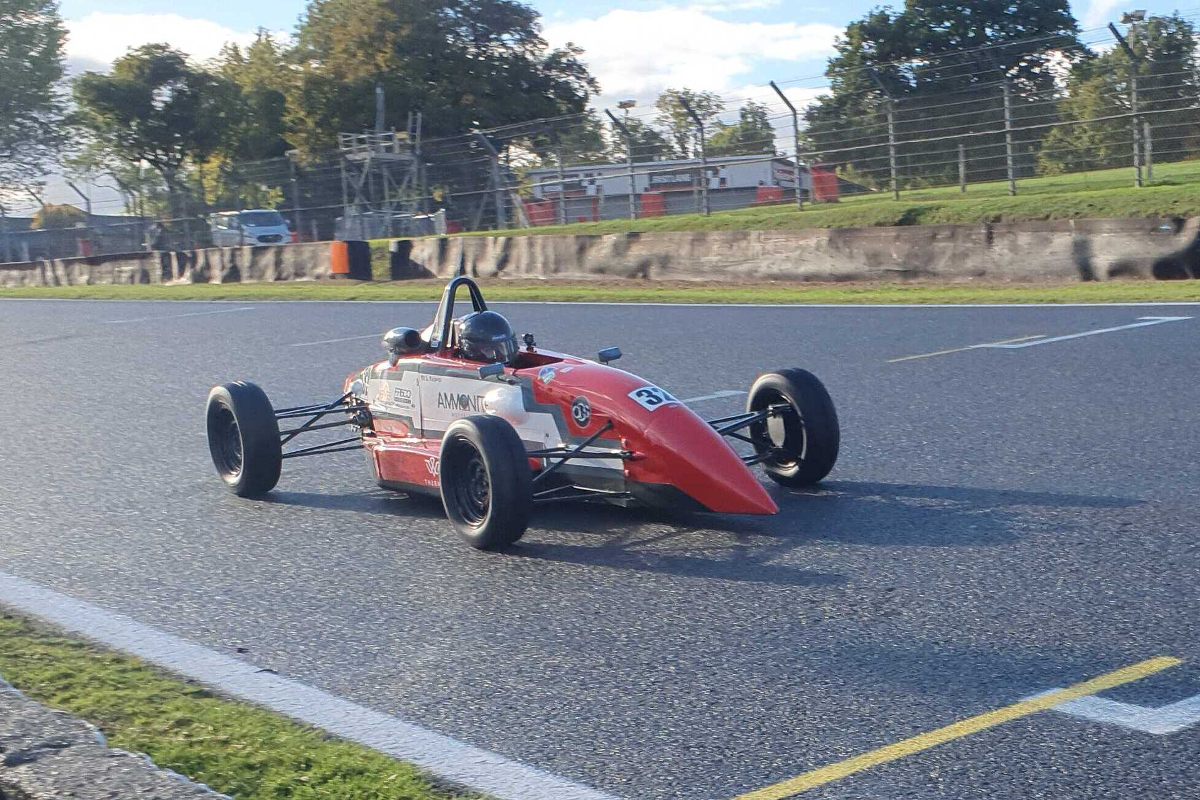 Ammonite Motorsport’s Shawn Rashid took a dominant win in the third Formula Ford Festival heat, which was marred by a huge crash for Tom McArthur and Matt Rivett.

Poleman Robbie Parks held on to the lead at the start, while James Penrose went from fourth to second and Michael Eastwell was slow off the line and dropped down the order from seventh place.

Penrose had more pace than Parks, and tried passing him around the outside of Paddock Hill Bend on lap two. There was wheel-to-wheel contact and Penrose went ahead and immediately began to pull away.

Behind them were Megan Gilkes and Michael Eastwell, who was sent into a full spin at Paddock Hill Bend on lap three but avoided being collected by anyone.

Rashid was the fastest car in the race and he passed Kelly and then Parks that lap to move into second place, with Parks being demoted to fourth by Kelly into Paddock Hill on lap four.

The lead became Rashid’s with a dive down the inside of McLaren of Penrose left the door open, and he then raced away.

A big queue of cars started to form behind Parks in fourth, with Don Hardman Racing’s Abdul Ahmed and the recovering Eastwell picking off cars who were battling ahead of them to rise up the order.

Cowden, who had been squabbling with Gilkes most of the time, finally cleared Parks at Druids on lap seven of 12. Eastwell passed Ahmed, then cleared Gilkes at Paddock Hill next time by.

Just behind them, Super Classic class rivals McArthur and Rivett collided. Rivett looked at the outside of McArthur on the way to the corner, then chose the inside as they entered it. He rode the rear-right tyre of McArthur and then rode over the front of his car.

After that his car landed upside down then cartwheeled into the gravel where a rear wheel dug into the ground and then flung his vehicle into the catch-fencing before bouncing back into the gravel. Both drivers were given medical attention and exited their vehicles unaided.

The race was instantly red flagged, with the restart scheduled to cover four laps. Penrose stopped on the formation lap though, telling Formula Scout his engine cut out, which was later put down to fuel pump failure, which meant another warm-up lap before racing began.

That meant Rashid had a big gap on the grid and he made the most of it to streak away for victory ahead of Kelly. Ahmed passed Cowden and Parks on the first lap of the restart, getting back ahead of Eastwell too in a photo finish, and was rewarded with third place.

Cowden and Gilkes’ battle ended with contact at Druids that sent them to retirement and the back of the field respectively, with Gilkes later disqualified, and means neither automatically qualify for the semi-finals. Parks finished fifth.