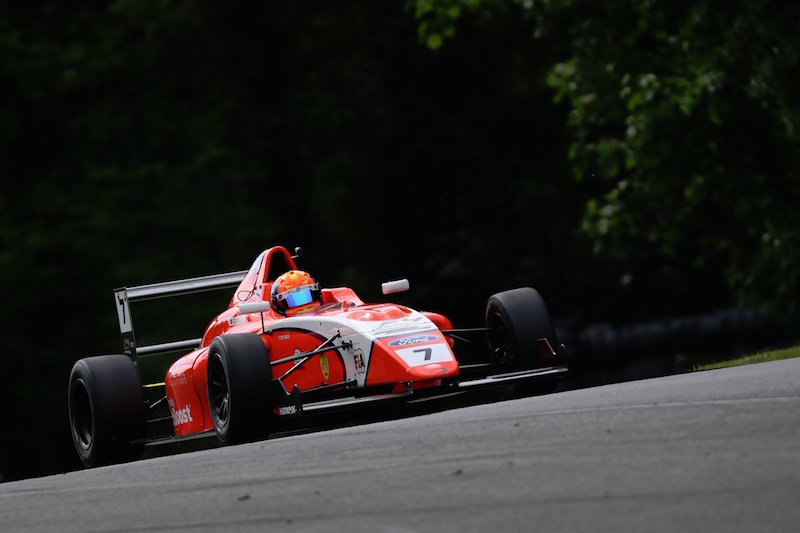 Quinn started second on the reverse grid alongside another Arden driver Ayrton Simmons, and he grabbed the lead off the line with Jamie Caroline following him past Simmons at the first corner.

Caroline had a look to the outside of Quinn at Tower on the first lap, before Piastri passed Caroline on the inside a couple of corners later, only for Caroline to grab the place back on the exit.

The safety car was called out on the first lap after an off for Daniel Cao, and at the restart Caroline went backwards, with Piastri, Simmons, race one winner Linus Lundqvist and his Carlin team-mate Logan Sargeant all coming past.

Quinn had a lead of nearly a second over Piastri one lap after the restart, but a miss-shift on the gears in the middle of the race put him under pressure from the Australian rookie towards the end.

The race was stopped?early inside the final two minutes after Karl Massaad crashed out following contact with Harry Webb.

In the battle for third, Lundqvist attempted to pass Simmons around the outside at Tower with 10 minutes left but ran wide and fell down the order.

That promoted Sargeant and Caroline, who traded places a lap later, putting Caroline in position to challenge Simmons for third.

He dived down the inside at Tower but the pair made contact in the middle of the corner which forced Simmons off into the field on the outside of the circuit and out of the race.

Caroline fell back to finish seventh, with Sargeant grabbing his second podium of the weekend in third in front of Lundqvist, who fought back after Oliver York barged his way past at the hairpin. Patrik Pasma completed the top six.

Webb took eighth in front of Hampus Ericsson, while Olli Caldwell finished his maiden single-seater race in 10th on his 15th birthday.