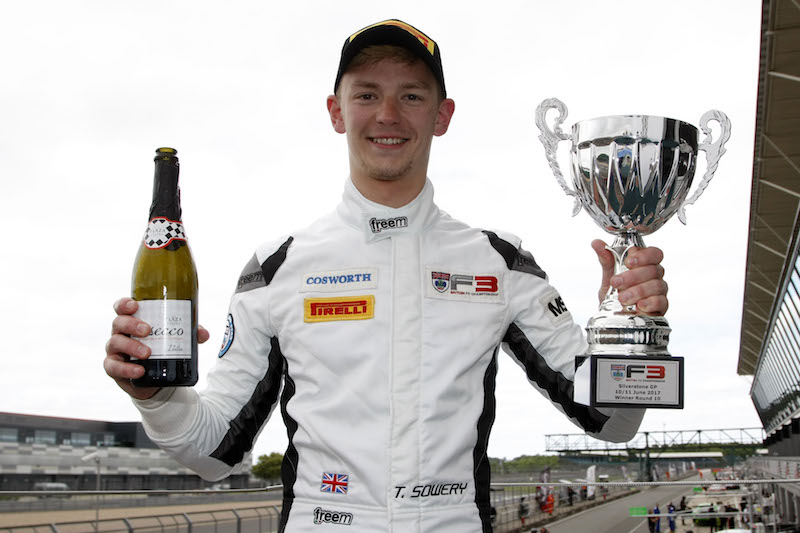 Toby Sowery completed a near-perfect BRDC British Formula 3 weekend?at Silverstone with a second win in the third and final race, after charging to second place behind Ben Hingeley in race two.

Following?his race one win, Lanan driver Sowery came from eighth on the reverse grid in the second race, while Hingeley started from fourth and surged into the lead past front-row starting Fortec team-mates Manuel Maldonado and Nicolai Kjaergaard.

The Welshman built a second’s advantage over the first lap, and finished two seconds clear after a comfortable race.

Sowery gained three places on the first lap, and then passed Callan O’Keeffe and Maldonado on consecutive tours before taking second away from James Pull – himself rising from sixth on the grid – just a couple of corners from the end of the race.

Setting the fastest lap gave Sowery pole for race three and he led throughout, pulling a lead of nearly four seconds.

After fourth in race two, O’Keeffe started from second but was passed on the first lap by Pull and then came under attack from Hingeley, with the pair making contact into?Luffield that put the South African out and sent Hingeley down the order with damage.

This benefited championship?leader Enaam Ahmed, fifth in race two, who set the fastest lap as he chased his Carlin team-mate Pull home.

Chase Owen made the most of a sixth-placed start to score his best result to-date in fourth, holding off his fellow American Cameron Das and the previously-United States-based Jordan Cane.