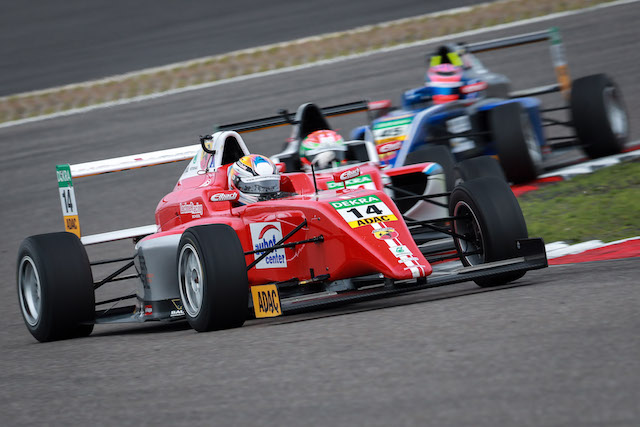 Prening effectively won the race with a fine move around the outside of the first corner on reverse-grid pole-sitter?Jannes Fittje, having started third on the grid.

The Lechner Racing driver then held the lead throughout the race, including after a single?safety period, to score his second win from as many rounds.

Juri Vips climbed from sixth to third at the start and soon despatched with Fittje for second. He was only half a second behind Preining going onto the final lap, but he slowed coming up to the line to allow Prema team-mate Schumacher to get?second place.

Starting 10th on the reverse grid after his race one victory, Schumacher made a good start to climb to fifth on the first lap before passing?Richard Verschoor a few laps in and Fittje after the restart.

Mawson – who won race two after Schumacher was penalised for pushing him wide – locked up and ran off track when he tried to pass his rival?into the chicane early on but he was then also able to make progress, passing Verschoor to take?fifth.

However, it was now the Australian’s turn to feel the wrath of the stewards, who handed him a drive-through penalty after he?crossed the pit-entry line with all four wheels when he passed Verschoor into the final corner. This relegated him to 28th in the final results and reduces his lead over Schumacher to 46 points with two weekends remaining.