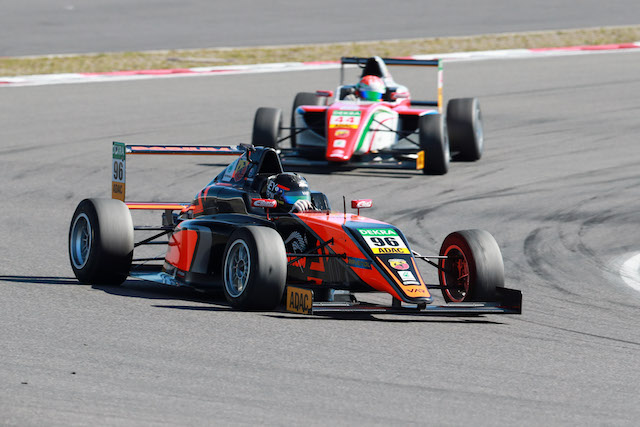 Joey Mawson took a big step towards the ADAC Formula 4 title by winning a controversial second race at the Nurburgring, where?Mick Schumacher was penalised for pushing the Australian wide to pass him.

Mawson led the race from pole position as Schumacher worked his way past?Mike Ortmann for second place through the opening corners.

Just a lap later, Schumacher made a late move?for the lead at the Turn 3 left-hander and locked up and hit Mawson, forcing the Van Amersfoort Racing driver wide and allowing Prema man Schumacher to move into the lead.

Stewards wasted no time in finding fault with the manoeuvre however and slapped Schumacher with a drive-through penalty, which he served just as?the safety car was introduced at the end of the fourth?lap, relegating him to 23rd despite the reduced speed of the field.

There had already been contact just behind Mawson and Schumacher on the opening lap, when?Juan Correa and Ortmann came together trying to run side-by-side through the chicane. With both cars running off track and Ortmann forced to pit for a new front wing, Correa’s Prema team-mate?Juri Vips was promoted to third, which became second when Schumacher served his penalty.

After the restart, Mawson was unable to really pull away from Vips, with the gap only?briefly over?one second.

Mawson remained ahead however to record his seventh win of the year, and with Schumacher only able to recover as far as 15th place, his lead increases from 39 to 64 points with seven races remaining.

Nicklas Nielsen scored his third podium finish of the season in third place ahead of Correa ahead Red Bull Junior?Richard Verschoor.

The highest pass for position after the safety car came when?Felipe Drugovich got ahead of?Thomas Preining for sixth inside the final three?laps.

Kim-Luis Schramm?and?Jonathan Aberdein were next while?Cedric Piro claimed 10th, taking the place away from?Simo Laaksonen just before the Finn ended up tangled up with?Moritz Muller-Crepon in the pit entry in a bizarre incident.