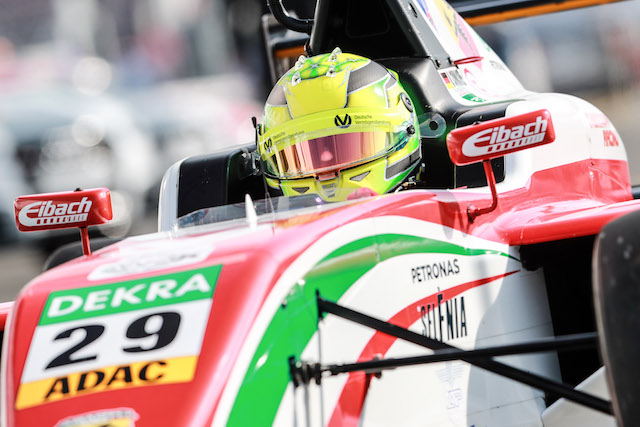 Mick Schumacher has breezed to his fourth?win of?the ADAC Formula 4 season?during the first race at the Nurburgring.

With the series running on the shorter track configuration, Schumacher had few places to defend from as he took another lights to flag win to make it four wins this season.

A good start was made by Schumacher from first position, as behind him Joey Mawson muscled his way passed Mike Ortmann around the outside of turn one for second.

A lap later, Juri Vips would try to pull off?the same manoeuvre on Nicklas Nielsen for fourth. Vips was unable to complete the move initially but held out on the inside of turn two to get passed the Danish driver, though this would not last as Nielsen was able to retake the position soon after.

After a few laps of the drivers running line astern, Mawson was fed up of sitting behind Schumacher and attempted a very late braking move into turn one to overtake the German driver.

Mawson locked his brakes heavily and was momentarily ahead as Schumacher dived out of the way, but Mawson was unable to slow his car down in time as Schumacher retook the position by the exit of the corner.

With that attempted move made, the rest of the race was rather lacklustre, with none of the top 10 changing positions for the next 10 minutes or so. The closest battles on track were generally outside the top 10, but a large majority of the field were around a second behind each other, giving no drivers a chance to overtake on the shortened circuit.

Only one major incident occurred when Oliver Soderstrom careered into the side of Toni Wolf at the last chicane, leaving both drivers to retire with terminal damage.

Schumacher would take the chequered flag with ease, nearly three seconds ahead of both Mawson and Ortmann in second and third position respectively.

Behind them was the top rookies of the race, with Nielsen and Vips in fourth and fifth position, and Juan Manuel Correa who brought his car up a couple of places from eighth to sixth.

Red Bull backed driver Richard Vershoor took seventh position after losing a spot to Correa earlier on in the race. Thomas Preining dropped back to finish eighth, ahead of Simo Laaksonen and Jannes Fittje in the final points paying positions.