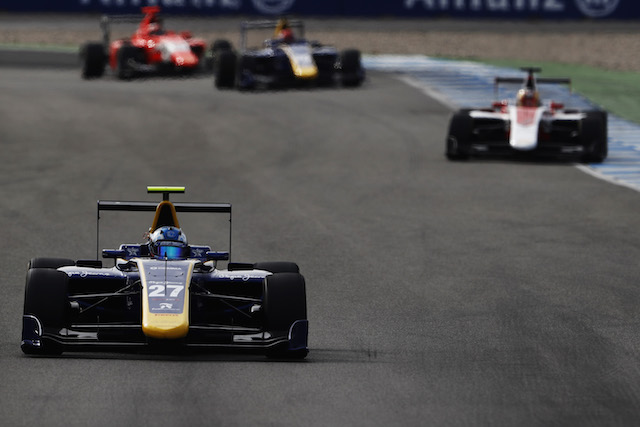 Jake Hughes?has taken his maiden win in GP3 in the second race at Hockenheim.

Hughes almost lost the win on two separate occasions, first by getting passed at the start, and secondly when he was investigated?for potentially re-taking the lead under the virtual safety car. However, the British driver was cleared of any wrongdoing and controlled the race lead until the end.

Arjun Maini made a perfect start from second on the grid to put himself into the lead into turn 1 as Hughes went very defensive as he tried to stay ahead of Jack Aitken. With the pair fighting it out for second position, Charles Leclerc was able to make his way up past Aitken into the hairpin.

That same lap, Ralph Boschung made a mistake into the hairpin and crashed into the side of Artur Janosz. Boschung?s front wing would dislodge and find it?s way stuck under Janosz?s car, and as the Polish driver attempted to nurse his car back to the pits, he couldn?t keep the car on the track due to the lack of downforce and crashed out of turn 12.

This brought out the virtual safety car, with Hughes passing Maini just as it was called out. When the track went green again, Maini was caught unaware and was passed left right and centre, falling all the way back to sixth position. This allowed Hughes to streak ahead with Leclerc hot on his heels.

Hughes was then under investigation for passing under the virtual safety car as Aitken behind made his way back up into the top three, passing Hughes? team mate Santino Ferrucci out of the hairpin.

On the penultimate lap, Aitken managed to pass and take second position away from Leclerc.

Having escaped a penalty,?Hughes would take the win by almost four seconds on the line from Aitken in second. Leclerc would manage to hold on to third, again suffering from heavy tyre degradation, and retook the championship lead.

Ferrucci would finish fourth after spending the final few laps defending from Maini in fifth. The Indian?battled with Matt Parry?after his horrible restart, and managed to?overtake into the hairpin. Parry made contact with the back of Maini coming out of the turn but neither driver suffered any repercussions.

Jake Dennis?made his way past both Nyck de Vries and then Parry one lap after the other, and managed to?catch up to Maini?but ran?out of laps. Parry would come home in seventh ahead of de Vries in the final points position in eighth.

Alex Albon had retired earlier in the race after suffering from suspension damage, while?race one winner?Antonio Fuoco struggled?down in the midfield after making contact with Parry at the beginning of the race. The Italian then made a mistake out of turn 1 and launched himself into the air off the kerbs,?eventually retiring.