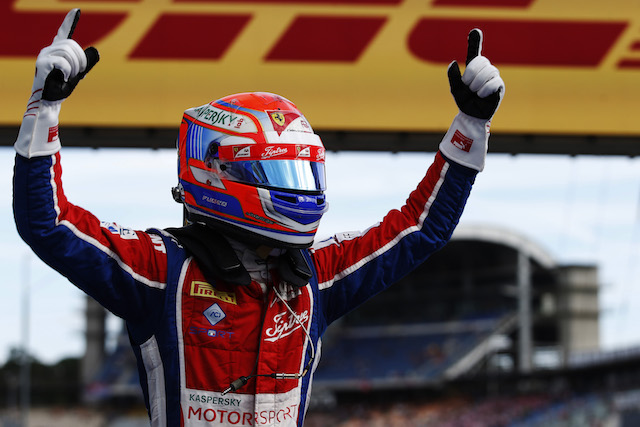 Though the Italian had dropped down to third at the start, he was able to make a better virtual safety car restart to put himself back into the lead, where he would stay until the end of the race.

The race was initially aborted as Jake Dennis stalled his car from second on the grid. The British driver was not able to get his car running before the final car passed him so he had to start the race in the pit-lane.

Alex Albon made the perfect get away with Nyck de Vries following him behind into turn 1 as?Fuoco lost second position?to the Dutchman. Jack Aitken was the next driver on the move as he hounded the back of Alex Palou for sixth?position. Palou had made contact with the rear of Matt Parry?at the start and his front wing was hanging off the car. All the drivers were bunching?up behind the Spaniard, allowing the top five to get away.

With the drivers all together, Ralph Boschung and Steijn Schothorst were fighting into?the Mercedes corner with?Schothorst attempting to overtake Boschung around the outside. The pair then made?contact, dislodging Boschung’s front wing as Schothorst speared into the side of Nirei Fukuzumi who was looking to pass the pair of them while they tangled.?

Then as Boschung attempted to drive back to the pits, he went out wide into turn 11 and his team mate Matevos Isaakyan was caught unawares and ploughed into the back of him. This forced the virtual safety car out as the track was now covered in debris.

As the virtual safety car ended, Fuoco nailed the restart and overtook Albon who was caught sleeping. Albon was also?passed?by De Vries as the Thai driver launched off the kerbs?on the outside of turn 1, allowing Charles Leclerc and Parry through as well.

Leclerc would then take De Vries moments later, and when Parry tried the same thing on the exit?of the hairpin, he was?pushed wide by De Vries and the two bump wheels together, allowing Albon back through on Parry.

With tyre degradation starting to play a role in the race, it was now Leclerc trying to keep his car on the track as De Vries crept ever closer to the Monegasque driver. The same situation was going on behind them between Albon and Parry for fourth position.

On the final lap, the degradation finally hit as Leclerc went way wide into turn 1 allowing De Vries through on the inside. Leclerc then dropped to fifth?as he tried to block both Parry and Albon from passing him into the Hairpin, but with no rear grip left he was easily overhauled by the pair.

But no one was close to Fuoco by the chequered flag, who took his second win of the season. De Vries came home in second ahead of Parry on the final podium position. Albon had to settle for fourth position, with Leclerc floundering down in fifth position with no tyres left.

Aitken came home in a lonely sixth position, with Arjun Maini able to go one further than his previous race one?attempts to?finish in seventh. Jake?Hughes was able to overhaul his team mate Santino?Ferrucci to finish eighth to start on reverse grid pole, with the final points paying position going the way of Tatiana Calderon from last on the grid.