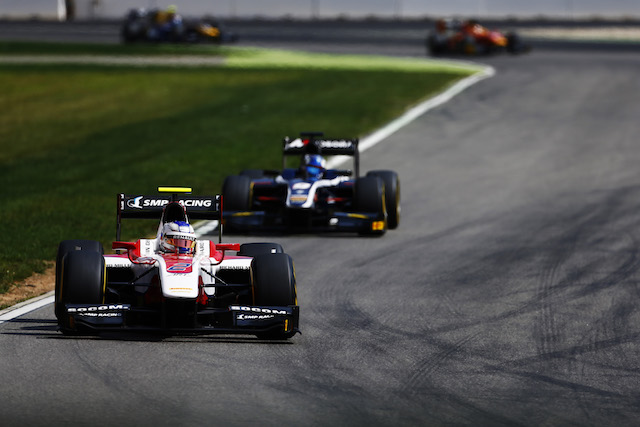 Sergey Sirotkin has won a chaotic GP2 feature race at Hockenheim despite having to pit twice.

The Russian had his?first pit-stop voided due to pitting under the virtual safety car, but nothing was going to deny him?as he used the advantage of the fresher tyres to overtake the field and take his second win in a row.

When the lights went out, it was Pierre Gasly who made a terrible start on the medium tyres, almost stalling the car and dropping way back beyond the top 10. On the other side of the grid, it was Sirotkin who made the perfect start and easily kept his lead while others darted around to avoid the slow Gasly.

Norman Nato was up alongside Oliver Rowland in third position after making a good start, but Rowland came back at him and was able to retake third position around the Mercedes corner. This left Nato all out of shape and allowed Alex Lynn to overtake Nato for fourth position into the Stadium Section of the track.

Meanwhile up front, Raffaele Marciello was hounding the back of Sirotkin going into the hairpin, but even though he had DRS, he was unable to pass him there. But Sirotkin had a slow exit of the hairpin and Marciello used this as a chance to get alongside the Russian and take the inside line into the Mercedes corner and take the lead of the race on only lap 2.

Lynn then made his move on Rowland for third while his team mate Nicholas Latifi did the same and got himself ahead of Nato for fifth. Rowland who was struggling on his Soft tyres was the first to pit onto the medium?tyres on only lap 7.

The first major incident was when Artem Markelov outbraked himself into the hairpin while defending from Gustav Malja, only to lose control of the car and slam straight into the back of Jordan King, bringing out the VSC.

Sirotkin had dashed into the pit-lane just as the VSC?was thrown, and was able to return to the track in fourth position on the harder compound tyres. This effectively gave him a free pit-stop as drivers cannot change tyres under the VSC, but it was unclear whether he pitted before the VSC?.

The drama did not end there as Daniel de Jong also misjudged his braking into the hairpin and speared into the side of Sean Galael, taking both drivers out and bringing out a?VSC?again.

Marciello finally pitted on lap 13, releasing the medium tyre starters Lynn, Latifi and Nato. Sirotkin was hot on their heels on his fresher tyres, but he was now under investigation for pitting during the VSC.

Latifi was clearly struggling with the harder tyres, which made it easy for Nato?to catch up and pass him. Sirotkin would also make his way through a lap later, followed by Malja, Nabil Jeffri and Nobuharu Matsushita.

Up front, Lynn on the harder tyres in the lead of the race in the other DAMS car was also struggling. Lynn had not yet pitted, which made it easy for Sirotkin to pass and take the race lead on track. But then a lap later, it was found that Sirotkin had indeed pitted under the VSC, meaning his first stop was invalidated and that he will be forced to pit again.

With Sirotkin momentarily out of the running, the driver inheriting the race lead was Marciello. Further down the field, Luca Ghiotto?and King made contact out of turn 10 with King ending up with a rear right puncture, forcing him back into the pits.

Sirtokin finally made his second pit-stop and switched back to the soft tyres, returning to the track in fifth position.

Lynn then tagged the back of Nato into turn 2, spinning the Frenchman around and causing him to stall the car on the inside of the corner, bringing out the third VSC?period.

With the final laps underway, Sirotkin was back on the move, overtaking both Rowland and Ghiotto and closed onto the back of Marciello. He made a move into the hairpin but Marciello was able to out drag him out of the corner, only for Sirotkin to fight back with an incredible late braking manoeuvre into turn 12 to retake the race lead.

With only two laps left, Ghiotto managed to catch up and pass Marciello into the hairpin to take second position.

But nothing was going to stop Sirotkin from winning, who took first position a full 13 seconds ahead of Ghiotto in second place. The final podium position went down the absolute wire as Gasly managed to catch and pass Marciello on the finish line, with the drivers separated by a time less than the timing screens would show.

Arthur Pic made his way up from 17th to finish in fifth position, followed by Rowland and Pic?s Rapax team mate Malja in sixth and seventh. Lynn would come home in eighth after receiving a time penalty for crashing into Nato, ahead of Antonio Giovinazzi who started dead last on the grid, with Matsushita rounding out the top 10.