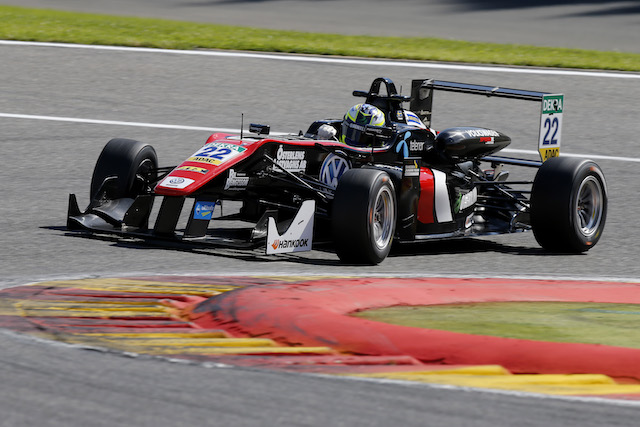 At the start, George Russell bogged down badly and his car got?swamped into La Source. This gave Eriksson the lead as the drivers went down the Kemmel Straight for the first time, with Anthoine Hubert close behind in second.

As the cars went four wide into the braking area, several were unable to keep it on the track. Ben Barnicoat, who was in third position went over the sleeping policeman on the exit and got a puncture, while Callum Illot who was battling with him spun out.?

As the cars hit the end of the first lap, it was Eriksson, Hubert and Nakita Mazepin occupying the top three positions. Mazepin would soon be?overtaken by championship leader Lance Stroll, who had made up several positions from ninth on the grid in just the first lap.

With the drivers spreading out, it was Niko Kari, who was up from 14th on the grid. that made the next overtaking manoeuvre.?He overtook German?David Beckmann for ninth around the outside of turn 7.?Nick Cassidy then got passed Mazepin down the Kemmel Straight for fourth position.

Russell, who had mostly recovered from his poor start attempted to follow Cassidy through on his team mate, but he got all out of shape out into turn 8 and ultimately lost out as Mazepin retook the position. He would later get past?Mazepin on the following lap along?the Kemmel Straight.

Maximillian Gunther was the next to pass Mazepin as the Russian driver struggled for straight line speed. As each driver passing him was getting a tow but he was not, leaving him a sitting duck down the Kemmel Straight. Russell then used the slipstream to get himself back ahead of Cassidy for fourth, and?was slowly eating into Stroll?s advantage with 10 minutes left on the clock.

Hubert was taking more and more out of Eriksson?s lead, but Stroll was already upon him and tried to take the Frenchman down the Kemmel Straight. He wasn?t able to pull it off and it only allowed Russell to join the pair on the track as Eriksson broke free of the pack.

With only a couple of minutes left, Russell made a late dive down the inside of Stroll into the bus stop chicane as the Canadian driver couldn?t find a way passed Hubert. Stroll would then tuck in behind Russell and re-take the Brit at the start of the Kemmel Straight, but Russell dug in and got straight back around Stroll into the braking zone.

This exact same scenario happened again on the final?lap, with Stroll getting back past Russell into the straight, only for Russell to re-pass him at the end. With no other obvious overtaking spots left on the track, Stroll would have to settle for fourth.

But it was Eriksson in control as the chequered flag dropped, taking his first win in the series. Hubert would finish in second, with Russell taking third despite his slow start at the beginning to finish on the podium.

Stroll thinking more about points took fourth, ahead of his team-mates Cassidy and Gunther in fifth and sixth respectively.

Kari would later overtake Mazepin for seventh position, with the Russian finishing in eighth and taking his best finish of the season. The final two points paying positions went to the Mucke team mates, with Mikkel Jensen in ninth ahead of Beckmann in tenth.