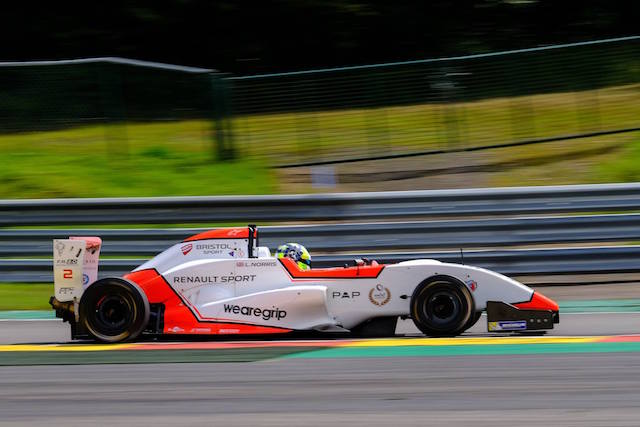 Lando Norris has won again at the Formula Renault 2.0 NEC event at Spa-Francorchamps, coming out on top of a tight contest with Max Defourny for the second race meeting in a row.

The?pair, who also battled in the the Eurocup event at Spielberg, swapped the lead nearly every lap before Norris was able to pass and then break free of the Belgian driver on the penultimate lap.

When the lights went out, Norris lead the pack?into La Source as Sacha Fenetraz attempted to hold off James Allen behind him, only to let Defourny overtake the pair of them around the outside of turn one.

Unfortunately, the race didn’t get much further than the Kemmel Straight as an incident between Will Palmer and Jehan Daruvala occurred into?turn 8. Daruvala had gone wide and spun at the top of the hill, catching Palmer with no where to go. The Brit collected the rear end of the Indian’s car, flinging him backwards into the tyre barrier and bringing out the safety car.

On the restart, Norris couldn?t break free of Defourny out of La Source and had the Belgian driver tucked up right behind him out of Raidillon. Defourny blasted past Norris down the Kemmel Straight as the Brit had to concede the lead for the time being. The pair would then spend the next two laps passing and re-passing each other, with Norris getting ahead at Blanchimont before Defourny got back in front?again by?La Source.

With the leaders fighting away, it allowed the likes of Fenestraz, Alex Gill and Allen behind them to catch up, almost making it a five?way battle for the lead with 10 minutes to go.

Allen was able to retake?Gill on the Kemmel Straight after the pair fought it out?at almost every corner. This allowed third place driver Fenestraz to break free and secure an almost certain podium position.

With two minutes left on the clock, Norris was able to pass Defourny at La Source, but the Belgian driver was aware of it and retook the Brit back down the Kemmel Straight. Defourny looked to have the place secured for the final?lap but Norris muscled his way passed at Bruxelles after Defourny went wide.

With no hope of catching up, Defourny settled for second as Norris took another win at Spa-Francorchamps. Fenestraz came home in third place ahead of Allen, while Gill held off a fast?approaching Dorian Boccolacci for fifth position.

Ferdinand Habsburg came home in seventh position, just ahead of Robert Schwartzman who was able to get passed Henrique Chaves for eighth position. Hugo de?Sadeleer rounded out the top ten, five tenths behind Chaves at the chequered flag.