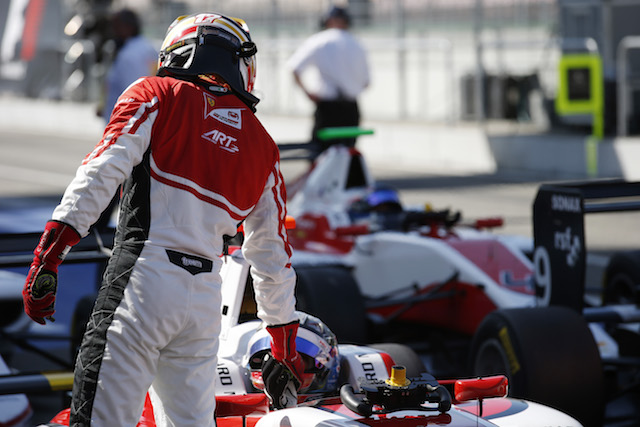 Alex Albon?beat GP3?championship rival Charles Leclerc by just 0.08 of a second to take his second pole of the season in qualifying at Hockenheim.

With all drivers waiting for the session to get underway?at the end of the pit-lane, it was Sandy Stuvik?who would lead the cars out ahead of his team mates Antonio Fuoco and Giuliano Alesi. Stuvik completed the the first timed lap with a 1:37.155, but it was Artur Janosz who would put in the first representative time with a 1:31.544. Stuvik would instantly better this with a 1:30.393 a lap later.

With each lap the drivers had, the times roughly fell by two tenths of a second, with Santino Ferrucci the first to drop under the 1:30’s. However, it was once again the ART drivers who would impress, with Leclerc putting his car on provisional pole with a 1:29.185 ahead of Albon by just under a tenth of a second.

Ferrucci was looking to improve on those times but had a huge lockup into turn 2, ruining his next set of flying laps. Albon was then able to go just a bit faster than Leclerc with a 1:29.122.

For the next five minutes, drivers would improving their times but were unable to beat Albon’s time until Matt Parry put in a time of 1:29.087. No one would come close as the mid-session lull arrived, but once the drivers went back out in anger, it was Steijn Schothorst?who was able to overthrow Parry with a 1:28.918.

But the Dutchman’s lead would not last as the times dropped again and again in the final few minutes with Albon, Jake Dennis and Alex Palou able to move ahead. Leclerc was once again on a fast lap but made a mistake at the stadium section and went into the gravel at turn 12.

With the chequered flag out, drivers were improving but no one was able to get close to Albon’s time of 1:28.431. Leclerc was then able to move himself back up to second place, ahead of Dennis and Nyck de Vries on the second row.

Fuoco took fifth ahead of Parry, Nirei Fukuzumi and Palou. Schorthorst took his best start of his season in ninth with Jack Aitken rounding out the top ten.