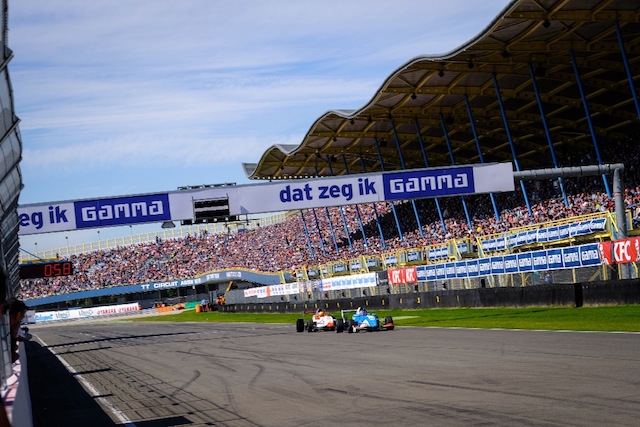 The great rivalry between?Lando Norris and?Max Defourny continued at the Formula Renault NEC event at Assen with the pair?claiming a win each .

Norris was dominant in race one, winning from pole position by 4.3 seconds ahead of a four-way battle for second.

The remaining cars in the top 10 formed another close gaggle at the finish line. They were headed by Nikita Troitskiy, but a five-second penalty for a jump start dropped him to the back of the group and?10th place, behind?Robert Shwartzman,?Bruno Baptista and?Hugo de Sadeleer.

It appeared as if Norris would pull a repeat in race two, quickly pulling away in the lead from pole position. He was leading?by three-and-a-half seconds on lap seven, when Defourny cleared Daruvala having jumped up from fifth to third at the start.

The Belgian quickly cut the gap to the Briton, and after another close battle between the pair in front of the huge Gamma Racing Day crowds, Defourny made a move stick into?the chicane at the end of the penultimate lap and took the win by 1.6 seconds.

Six seconds further back, Daruvala held off the Tech 1 drivers Boccolacci and Fenestraz for third, with?Will Palmer finishing on the tail of that group after only managing 11th in race one.

Norris continues to lead?the standings with two rounds remaining, 24 points ahead of Boccolacci, 38 ahead of Defourny and 45 in front of Daruvala.