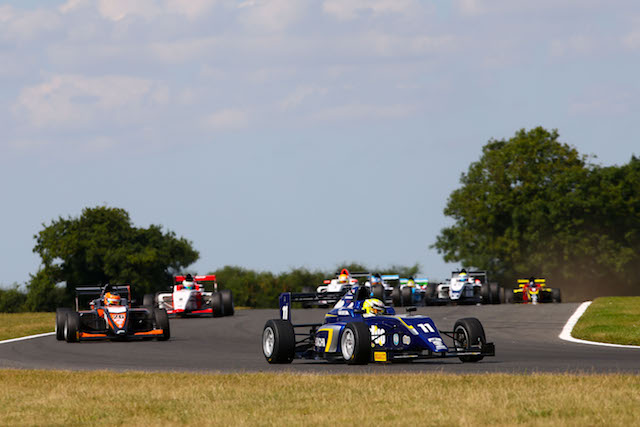 Coming into the weekend with a four-point advantage, Collard crucially defeated Leist by?0.059 seconds in qualifying to take race one pole, and after an early safety period, he pulled away to win by three seconds over the Brazilians.

Randle’s race was not without incident however, with contact with team-mate?Enaam Ahmed at Brundle on lap one sending?the former junior karting world champion onto the grass and into a roll, from which he escaped unharmed.

Showing strong pace from the start of the event in the Carlin entry?driven by?Lando Norris and?Colton Herta earlier this year, Mazepin lost seventh to?Tarun Reddy on the final lap, but this gave him pole for race two.

The Russian made full use of it, winning by almost two seconds over Reddy to score his first single-seater victory.

Scott passed Randle off the start for third, while Hingeley was forced to give up fifth with a mechanical problem at the end of the formation lap. Sowery, Leist and Collard remained in formation in sixth, seventh and eighth.

Collard beat Leist to race three pole by just 0.004s based on their fastest laps so far, both set in race one.

He kept a faster-starting Leist at bay to keep the lead at the start and once more opened up a lead of almost three seconds, before backing off to win by 1.5s.

Hingeley started third thanks to setting the fastest lap in race two once he started from the pits, and he managed to keep Ahmed at bay to score his first podium, 13s behind the winner.?Scott was fifth ahead of Randle, Sowery and Mazepin.