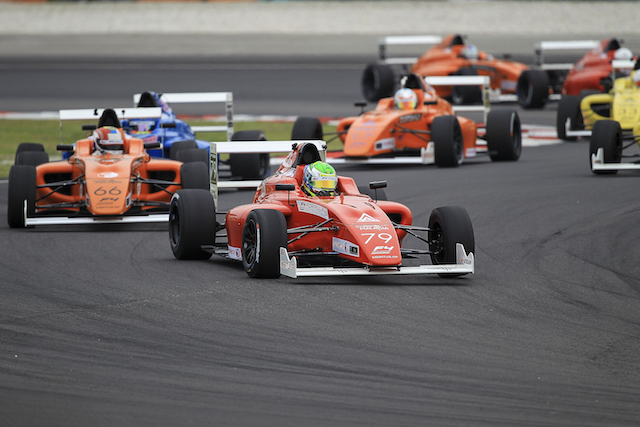 Australian Love, champion of the preceding AsiaCup Series in 2015, claimed pole position but he was beaten off the start in race one by young Singaporean driver Frost. He stayed ahead until lap seven, when Love managed to work his way into the lead, which he extended to 2.7 seconds by the end.

Love doubled up in race two, leading from start to finish with a final margin of 2.4s over Frost.

For race three the grid was reversed, although Love managed to work his way from fifth to first by lap two. However, a mechanical failure forced him to retire, enabling Frost to take the win.

Love scored his third win of the event in race four, winning by more than seven seconds. Frost slipped back at the start but recovered to third, behind New Zealand’s?Faine Kahia.

Love initially led once more in the fifth race, but a drive-through penalty for a jump start gave Frost another opportunity and his second victory of the weekend.

Grid positions were reversed once more in the sixth and final race, but Frost wasted no time in moving to the front, passing?Akash Gowda on lap three to take the lead. Love was also on a charge from seventh however, and finished just 0.151s behind Frost at the line.

Frost holds an early lead in the standings, 19 points ahead of Love. Kahia is third after finishing five of the races on the podium and the last one in fourth, behind Indonesia’s?Presley Martono. Indian driver Gowda picked up a podium in race three, while Malaysia’s?Nazim Azman took third in race five.