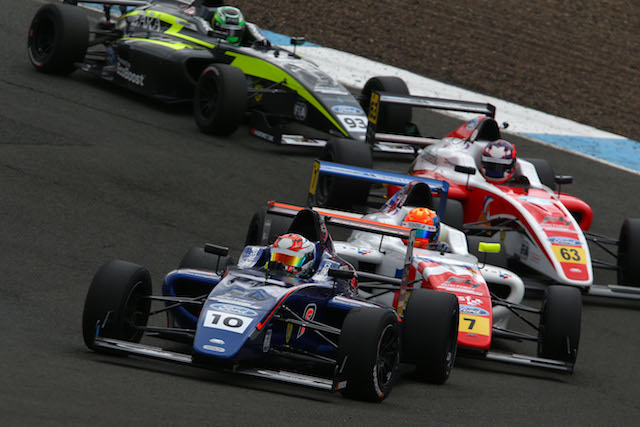 Max Fewtrell moved ahead in the British Formula 4 title race after a dramatic Knockhill event from?which erstwhile leader Petru Florescu was thrown out after clashing with a team-mate.

The race wins went to?Alex Quinn,?Luis Leeds and?Zane Goddard, with Red Bull Junior Leeds closing to within five?points of Fewtrell having been 31 off the lead at the start of the weekend.

Florescu actually won the first race of the weekend to extend his margin over Fewtrell, but would later be excluded from the entire meeting after an incident with another of the title-fighting?Carlin drivers,?Devlin DeFrancesco.

The pair were effectively fighting over third in the reverse-grid race, behind a slower?Jamie Caroline who had been given a time penalty for a jump start. When DeFrancesco was forced wide by Caroline out of the final corner, Florescu got a run along the main straight, but was squeezed onto the grass, leading to contact that sent both off track and into the barriers.

Florescu walked over to DeFrancesco and threw punches?at him before the pair were separated.

The Romanian driver’s exclusion promoted Racing Steps Foundation protege Quinn to a second win of the season in race one, in front of DeFrancesco and Goddard.

Australians Leeds and Goddard were in a class of their own in race two in front of the multi-car scrap for third, which was eventually taken by Fewtrell.

Goddard took the race three win after passing polesitter Quinn at the end of the opening lap, with Leeds taking second after passing Quinn into the final turn.

Fewtrell came fifth, putting him five ahead of Leeds. DeFrancesco, who came ninth in the finale, is 13 further back and four in front of both Sennan Fielding and?James Pull. Florescu has fallen to sixth, 30 behind Fewtrell.