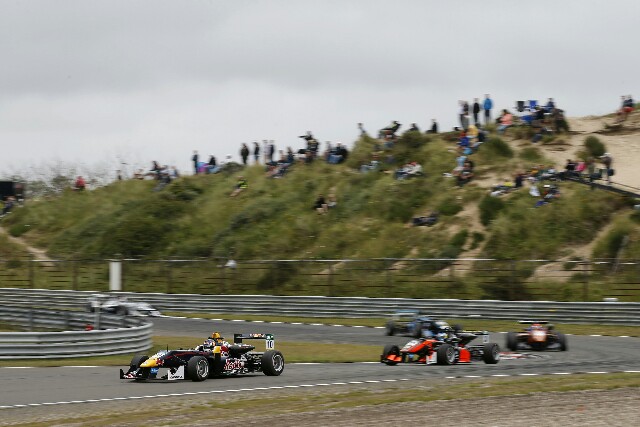 GP3 title contender Alex Albon will return to Formula 3 for the Zandvoort Masters event this weekend, with Colton Herta and Thomas Randle also among the entries.

Albon will drive for the Hitech GP team, with fellow Britons and squad regulars George Russell and Ben Barnicoat opting to miss the event. Albon, who competed in European F3 for Signature last year, will drive alongside team protege Nikita Mazepin.

Carlin has its usual lead driver Alessio Lorandi along with its Euroformula Open pairing Herta and Ameya Vaidyanathan, who will be making their debuts in full-on F3 machinery.

In the first of its two cars, Fortec will run Sam MacLeod with an eye on fielding him in Macau, where he ran near the head of the field with West-Tec in 2015. He previously competed for Fortec in Formula Renault BARC and British F3.

Another Australian Randle lines up for Double R, having raced against the team in BRDC British F3 this year. He will drive the car Alexander Sims took to a podium in Macau last year.

“This is just a great opportunity and despite the short notice when it came up I jumped at it,” said Randle.

“I loved?every second of driving the Dallara F3 when I did the Valencia test late last year [with T-Sport] and?the Zandvoort circuit looks like it will suit my style. It won’t be easy with so many
talented, and more experienced F3 drivers in the field but I will be doing my very best to achieve?a solid result.”