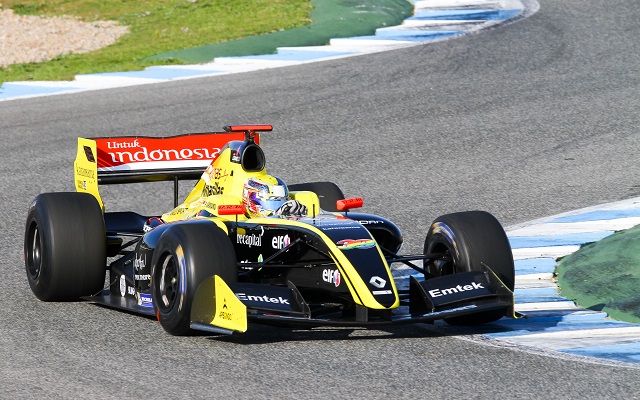 19-year-old Indonesian Armand drove for Pons in the opening pre-season test at Jerez, and will get to do so in Aragon next week.

He makes the step up after two years in Formula Renault 2.0. His rookie single-seater season came in the NEC with Fortec in 2013, finishing 28th in the standings, before switching his focus to the Alps series last year for Tech 1 Racing. He scored a best result of fourth at Pau as well as two other top 10 finishes on his way to 18th place.

?The Jerez test was quite positive, and despite it being my first experience, I set the 14th and ninth fastest laps,” he said.

“So I thought that it would have been a smart move to continue my World Series Renault experience with Pons Racing. I look forward to this series which is the closest one to Formula 1, as demonstrated by the number of drivers who graduated to F1 from here.”

Indeed, Armand will be team-mate to Merhi, who finished third in the series in 2014 and was announced as a Pons driver for the coming season, prior to also securing a place at the resurrected Manor F1 team.

Armand will be the second Indonesian rookie in FR3.5 this year, joining 18-year-old compatriot Sean Gelael of Carlin.

?I am delighted to be able to have Armand in our team,” said Pons team manager Emilio de Villota.

“In Jerez he was impressive both for his approach making his debut in the series and for the potential expressed. For him, having a quick and experienced team-mate like Merhi will be key in terms of growing up race by race.?

The announcement of Armand leaves three vacancies on the 2015 FR3.5 grid – the second Zeta Corse car, occupied by Johnny Cecotto in the Jerez test, and both seats at Comtec, who were absent from the opening test.