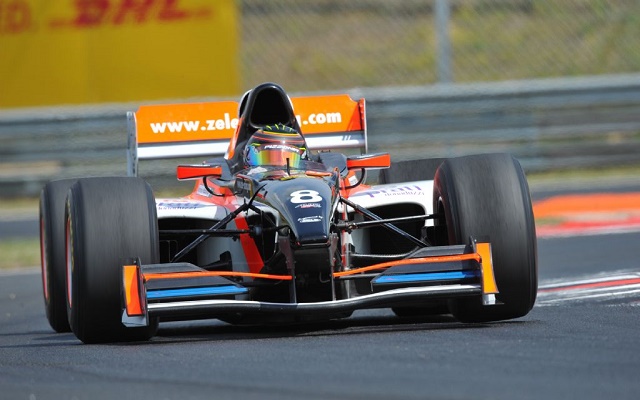 Zele Racing’s Antonio Pizzonia controlled the second race of the Hungaroring Auto GP opener after going from seventh to the lead in one lap.

Pizzonia, who lost the win yesterday after going wide on the final lap, made a superb start and quickly manoeuvred around opponents to slot in behind teammate Andres Mendez.

And, when Mendez ran wide a couple of corners later, the Brazilian was into the lead, never to relinquish it again.

Mendez was subsequently passed by newcomer Leo Pulcini and Johnny Cecotto and was then ordered to serve a drive-through for jumping the start.

As the race order stabilized, tyre wear became the key issue on the dry track, with several prominent frontrunners struggling.

First, yesterday’s podium finisher Christof von Grunigen hit the cliff before halfway through and began losing position after position before finally heading for a pit stop.

Meanwhile, with Pizzonia running with it out front, the podium positions were basically settled for good when Cecotto spun out while chasing Pulcini. The Venezuelan did not lose a spot, but dropped a lot of time to the Italian and seemingly settled for third.

The final laps were met with drops of rain with drivers feeling the effect of a slippery surface. Pizzonia briefly ran wide into turn one but lost little time, while a number of drivers had similar moments.

Sa Silva passed Zlobin late on to claim fourth and the Russian was then overtaken by Cipriani, only to take the spot back and finish fifth.

Regalia recovered to steal sixth off Cipriani on the final lap, while von Grunigen eased past Mendez on fresher tyres to pick up eighth.