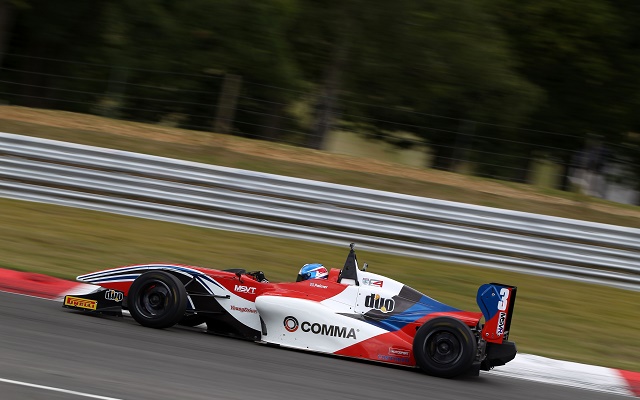 BRDC F4 championship leader Will Palmer continued to dominate the proceedings at Brands Hatch, leading lights to flag in the opening race.

Palmer, who was quickest in practice and qualifying, maintained the lead off the line as teammate Harrison Newey bogged down, slipping to fourth behind Ciaran Haggerty and Tom Jackson.

Midway through the opening lap, Jack Bartholomew and Ameya Vaidyanathan were both eliminated from the race and a three-lap safety car period followed.

The restart then saw the untouchable Palmer predictably pull away, with Haggerty himself establishing a solid advantage over Jackson.

The gaps between the leading trio continued to rise as the race settled into a rhythm, albeit Newey remained close to Jackson for the duration.

However, the HHC driver couldn’t find a way past, while his teammate Palmer cruised to the chequered.

With Haggerty, Jackson and Newey making up the top four, privateer Jack Lang kept Omar Ismail and Jordan Albert behind to claim an impressive fifth place.

Lanan’s Chris Mealin, who started a lowly 14th, made his way up to tenth early on before passing teammate Rodrigo Fonseca and HHC’s Sisa Ngebulana for the crucial eighth place, which will hand him reverse-grid pole for tomorrow.

Ngebulana, meanwhile, did hold off Fonseca as the Mexican settled for completing the top ten.