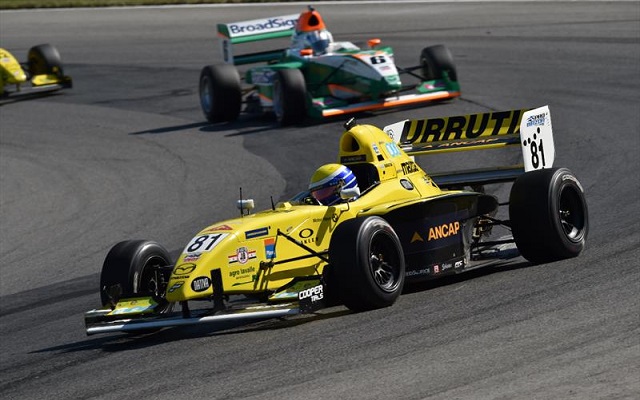 Santiago Urrutia was victorious in the first Pro Mazda race?at Mid-Ohio and extended his championship lead back over 30 points, which is the amount given for a race win.

It was Garrett Grist lining up in?pole position but fellow front row starter Neil Alberico got the jump on him at the launch. As a result, Alberico was not only into the lead but Grist would also drop behind Urrutia.

Soon, however, the officials began to investigate the start, eventually ordering Alberico to give up his lead and let Urrutia through.

The Uruguayan, who was under massive pressure from the charging Grist at the time, was soon given the lead. Alberico did manage to keep second despite having to ease off and his manoeuvre backed Grist up just enough to allow Timothe Buret to overtake the Canadian.

In the lead now, Urrutia spent the rest of the race closely followed by Alberico. However, the American could find a way through and the duo finished as they ran.

Juncos duo Buret and Grist took third and fourth respectively, while the top ten was completed by Florian Latorre.

Andretti’s Weiron Tan had to settle for sixth, followed by Patricio O’Ward, who fought his way up from tenth.

The top ten was completed by Will Owen, Dalton Kellett and Victor Franzoni.

Michael Johnson, making his return after an injury at St. Pete sidelined him for most of the Pro Mazda season, finished 15th.

Grist and Alberico will both get another chance to pick up a race win at Mid-Ohio as they will line up first and second in tomorrow’s event.