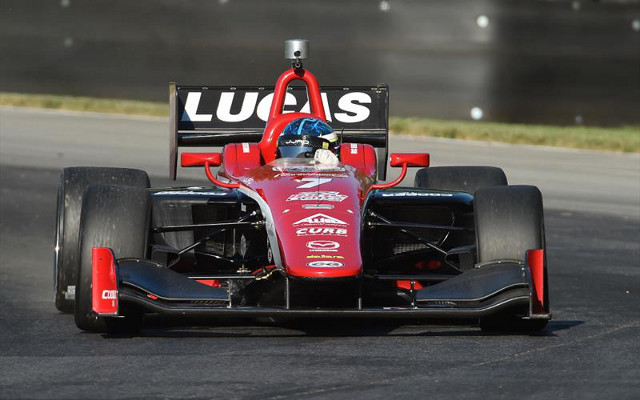 RC Enerson claimed a commanding maiden victory in Indy Lights in race one at Mid-Ohio, as the leading championship contenders all hit strife.

The problems for the big names began on lap one, as points leader Jack Harvey and his chief rival Spencer Pigot made contact fighting over second place.

Harvey was sent off into the grass and both drivers pitted at the end of the first lap. Pigot managed to rejoin just on the lead lap while Harvey lost five.

Enerson had quickly built a five-second lead over Felix Serralles when the full course caution was required after an off from 10th for Ethan Ringel.

Car issues for Serralles triggered a brief second caution a few minutes after the restart, though the Puerto Rican was able to get going again and make it to the pits.

After that, Enerson was untroubled and claimed victory by 2.4 seconds.

Max Chilton was able to follow his maiden win in Iowa with a second place after starting sixth, benefiting from problems for those ahead of him and also putting a move on first-time podium finisher Shelbey Blackstock at the first restart.

Kyle Kaiser took fourth ahead of Sean Rayhall, who came from 12th and last to fifth on his return after four races away.

After starting back in 10th, Ed Jones had looked set to benefit from the problems for Harvey and Pigot but pitted after some bruising encounters as he attempted to carve his way through the order.

He rejoined ninth and a lap down but on fresh rubber set a good enough lap time to claim second on the grid for race two behind Harvey, whose fastest lap also gave him a bonus point.