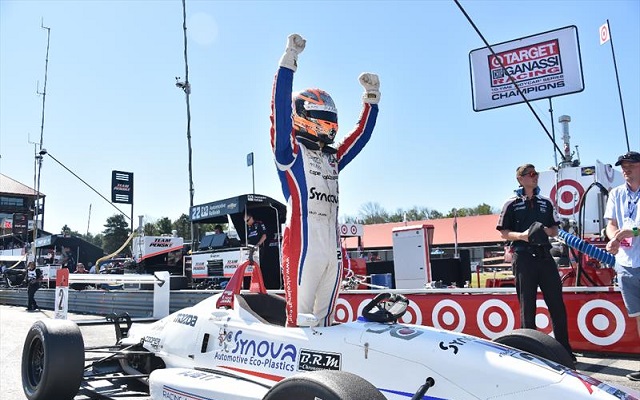 Nico Jamin completed a perfect weekend by triumphing in the third USF2000 race of the weekend at Mid-Ohio.

The Frenchman was faultless from the first lap and established a lead of six seconds entering the final stage of the race when a caution, triggered by Keyvan Andres Soori suffering from technical issues, neutralized the action.

Despite the interruption, Jamin had a perfect restart and cruised to the finish.

Anthony Martin ended up as the top rookie, running a calm race in fourth, followed by Parker Thompson, who had to endure race-long pressure from Garth Rickards and Luke Gabin.

Gabin eventually ended up sixth ahead of Sennan Fielding, the duo passing Rickards after the restart.

The top ten was rounded up by Jack Mitchell and Nikita Lastochkin, both of them passing Ayla Agren who had to settle for 11th.

Courtesy of his clean sweep, Jamin leads the championship by 60 points ahead of his only challenger Eidson with 66 points still up for grabs.