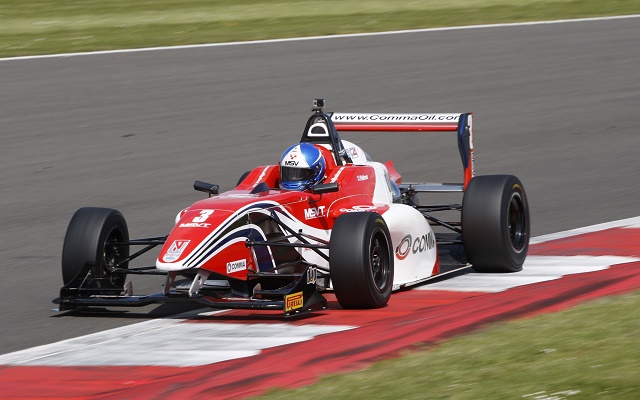 BRDC F4 title favorite Will Palmer made a statement of intent in qualifying at Brands Hatch, heading an HHC 1-2 with teammate Harrison Newey.

The duo secured the squad’s fourth front row lockout of the year from five qualifying sessions.

Championship leader Palmer, who looked untouchable in morning practice, had little trouble confirming his pace as he established a solid early lead.

Newey got within six tenths at halfway point but wouldn’t manage to claw any more time out of his teammate.

As such, despite the fact that Palmer called his run early after six laps – the least of anyone on the grid – he would not be troubled for pole.

Ciaran Haggerty of GBR/Ecurie Ecosse recorded his personal best qualifying effort of the season in third and was the last driver within a second of the dominant poleman.

CDR teammates Tom Jackson and Omar Ismail followed in fourth and fifth, separated by just 0.02s, with Jack Lang a further 0.04s behind.

Rodrigo Fonseca was the top Lanan in seventh in what was a difficult session for the reigning champions as Jack Bartholomew split Jordan Albert and Sisa Ngebulana in ninth, while Chris Mealin languished in 14th.

The session was called two minutes early due to a red flag.