PaddockScout.com takes a look back at another busy weekend of action for the motor racing stars of tomorrow…

In British F3’s visit to Rockingham the focus was on Felipe Nasr to see if he could seal the title with two meetings still remaining. However, it was fellow Brazilian driver Pietro Fantin who surprised by taking pole position for two of the three races in qualifying. He duly converted the first of these into a race win. He had lost the lead to Nasr at the start, but the points leader was later handed a drive-through penalty for not respecting track limits, giving his compatriot the victory ahead of Rupert Svendsen-Cook and Jack Harvey. Nasr recovered to sixth after serving his penalty.

Australian Scott Pye began the second race on pole courtesy of the reverse grid, and led from start to finish in the rain to become another first-time winner, in what was the reigning British Formula Ford champion’s first visit to the podium in F3. Nasr finished second to strenghten his championship position, with Will Buller coming third.

Fantin was on pole again for the third and final race, and although he maintained his lead at the start he was soon passed by Kevin Magnussen and Nasr. Nasr later ran wide to let Fantin back through, and Fantin then put Magnussen under pressure. The Dane held on to record his fifth win of the season, while third was enough for Nasr to wrap up the title.

Magnussen’s victory moves him to the head of the tight battle for runners-up spot, ahead of Buller and Carlos Huertas. Rounds at Donington and Silverstone remain, with the first coming on 24-25 September.

Drivers’ standings after 8 of 10 rounds:

The penultimate round of the Auto GP season took place at Valencia. Though not on the street circuit used for the Grand Prix but on the permanent Ricardo Tormo facility. Sergey Afanasiev enjoyed a strong weekend last time out in Germany and began this weekend in similar form as he took pole position for the first race. He converted that into a comfortable win, becoming the first driver to win three races this season. Fabio Onidi and points leader Kevin Ceccon completed the podium.

GP3 regular Rio Haryanto scored his first win in the category in the second race, after starting from fourth on the reverse grid. He jumped up to second at the start and later passed Adam Carroll for the lead. The Northern Irishman came across the line in second after defending from Samuele Buttarelli.

Ceccon could only finish eighth but Afanasiev came home last, meaning the Italian teenager remains in the standings lead, seven points ahead of the Russian racer. Ceccon has meanwhile sealed the new Under 21 Trophy. The season finale takes place at Mugello in Italy on 1/2 October.

Drivers’ standings after 6 of 7 rounds: 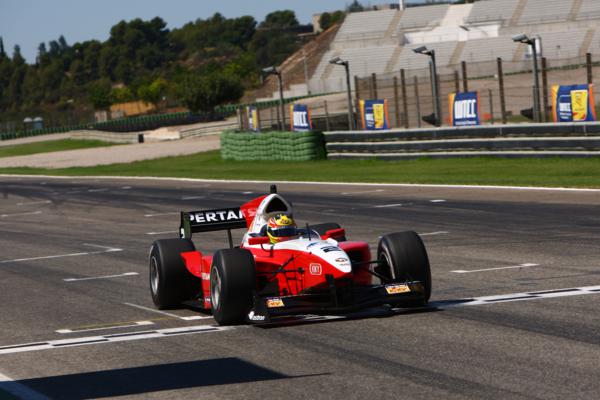 Haryanto bagged the prize money at Valencia for scoring the most points over the weekend. Photo: Auto GP

The Italian F3 Championship entered the second half of its season at Adria. The Ferrari Driver Academy duo of Brandon Maisano and Raffaele Marciello stole the front row in qualifying. Both chasing their second win of the season, Marciello got a better start to the race which allowed him to take the lead before pulling away to win. Maisano kept hold of second, with Eddie Cheever III, the Italian son of former F1 driver and Indy 500 winner Eddie Jr, in third.

French driver Maxime Jousse took his first F3 win in the second race, ahead of Kevin Giovesi and Victor Guerin. Sergio Campana may have only finished sixth in both of the races but he clings on to the points lead, one point ahead of Jousse. Marciello and Maisano are seven and eight points off the lead respectively. Ferrari tests await the top three in the final standings, with rounds at Vallelunga, Mugello and Monza remaining.

In the second race, Stanaway kept hold of the lead from pole, forcing Sorensen to settle for second. Hannes van Asseldonk claimed third. Blomqvist crashed out and sustained a fractured vertebrae, which will keep him out of action. Though Stanaway and Sorensen scored identical results, Stanaway picked up four bonus points for pole and fastest lap in both races. That extends his lead to 29 points, with two meetings at Assen and Hockenheim to go.

ADAC Formel Masters was also in action at Laustiz, where Pascal Wehrlein took one win and two third-places to extend his points lead as nearest rival Emil Bernstorff failed to score any points. Kean Kristensen and Mario Farnbacher won the other two races.

In British Formula Ford at Brands Hatch, Scott Malvern scored his 13th straight victory in the first race. A drive-through for a jump start brought his run to an end in the second race as Dutchman Jeroen Slaghekke won, before Malvern returned to form in the third and final race.

In the French F4 Championship at Albi Andrea Pizzitola and Pierre Gasly shared the race wins but Matthieu Vaxiviere took two podium finishes to extend his points lead over Pizzitola.

Finally, a look further down the ranks to the CIK FIA World Karting Championship, with the third of five rounds taking place at Genk in Belgium. McLaren protege Nyck de Vries won two of the four races, with Red Bull backed Alexander Albon winning another. De Vries leads the standings, ahead of Albon.

Driver of the weekend: Rio Haryanto – There were few dominant performances across the categories this weekend, so the young Indonesian gets our award after scoring more points than anyone else in Auto GP by winning the second race from fourth on the grid.