Three of Europe’s Formula 3 championships take to the track this weekend, with the focus of attention on Felipe Nasr as he attempts to become British F3’s latest Brazilian champion…

Nasr arrives at Rockingham, the eighth of ten rounds in the British F3 season, with 114 point lead over nearest rivals William Buller and Carlos Huertas. To secure the title, Nasr only needs to maintain a 109 point lead. He scored his maiden win in the series at the circuit last year, so don’t be surprised to see him adding to his seven wins so far this year.

The penultimate round of Auto GP takes place at Valencia’s Ricardo Tormo Circuit. Youngster Kevin Ceccon took the standings lead last time out in the absence of Luca Filippi, but just two points separate the pair with 92 points left up for grabs. Sergey Afanasiev is still within striking distance after a good time at Oschersleben. 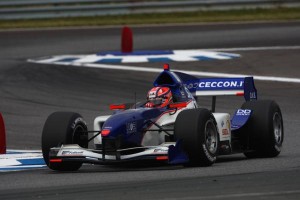 The seventh round of the German ATS F3 Cup takes place at the Lausitzring, with dominant championship leader Richie Stanaway returning after winning on his GP3 debut at Spa last weekend. Nearest rival Marco Sorensen may only have won once to Stanaway’s nine wins, but an impressive run of podiums from the Dane leaves him just 25 points behind, with 72 left to play for.

As per usual, ADAC Formel Masters supports the F3 at Lausitz. Pascal Wehrlein had been dominating the season, but only managed one third place finish from the three races last time out in Austria. That leaves Brit-Dane Emil Bernstorff just 12 points behind.

British Formula Ford supports the DTM round at Brands Hatch, with Scott Malvern hoping to extend his 12 race winning streak that dates back to April as he edges closer to the title.

Look out for the PaddockScout Weekend Roundup on Monday to find out which young drivers shine this weekend.