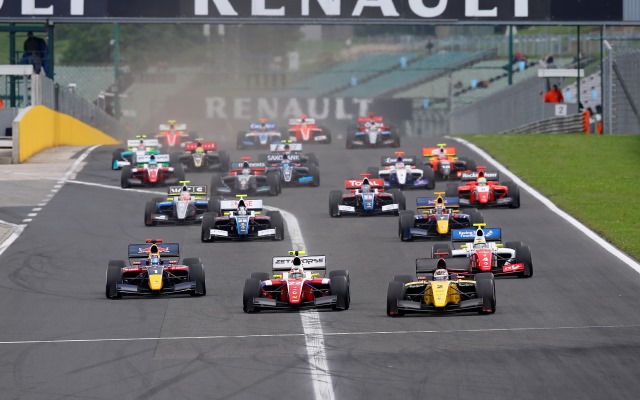 Roberto Merhi continued his strong recent form at the Hugaroring to close the gap to Formula Renault 3.5 leader Carlos Sainz to just 16 points. Merhi scored his third win from four races in the opener, finishing almost half a minute ahead of anyone else in wet conditions despite starting seventh. He beat Sainz to pole for race two, but would have to settle for second behind Norman Nato.

Nato, whose only podium finish earlier this year was his win in Monaco, qualified in third for both races, but had a poor start on Saturday and finished back in eighth. He got a great launch on Sunday though, propelling him ahead of Merhi and Sainz and into the lead by the first corner.

Sainz had a nightmare qualifying on Saturday, caught out by a red flag that ended the session early and left him down in 14th. He quickly got up to fourth in the opening laps, but that would be as far as he would get. In race two, he fell to fifth exiting the first corner after his car went into anti-stall, and lost another place later to Red Bull stablemate Pierre Gasly, not helped by a braking issue.

Gasly took two podiums from a FR3.5 weekend for the first time, passing Oliver Rowland for second at the last corner in race one and then beating his long-term rival to third place on Sunday. Rowland had led the first race early on from pole, but would have to settle for third and fourth from the two races. 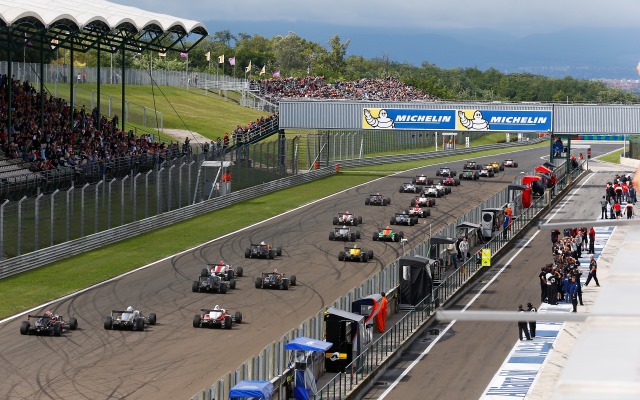 Andrea Pizzitola moved up to third in the Eurocup Formula Renault 2.0 standings with his second victory of the season from pole position in race one at the Hungaroring. Finishing back in ninth in race two, Pizzitola is 60 points off the championship lead, but only 14 away from second place.

Jack Aitken won the second race, taking his first win in the Eurocup. He started race one from the back of the grid after a qualifying crash and finished 18th, but bounced back on Sunday to claim pole and victory.

Aitken was chased home by Fortec team-mate and wildcard entry Charles Leclerc, who took his third second-place finish from the last three Eurocup races having also finished in the same place in race one.

Behind the 16-year-old karting graduate in race one was Nyck de Vries. With Leclerc not eligible to score, the Dutchman took 18 points. Although he finished back in seventh in race two after a misjudged move costs him places, he still twice finished ahead of nearest rival Dennis Olsen. The Norwegian was only ninth and eighth in the two races, giving de Vries a 48-point lead with two rounds left. 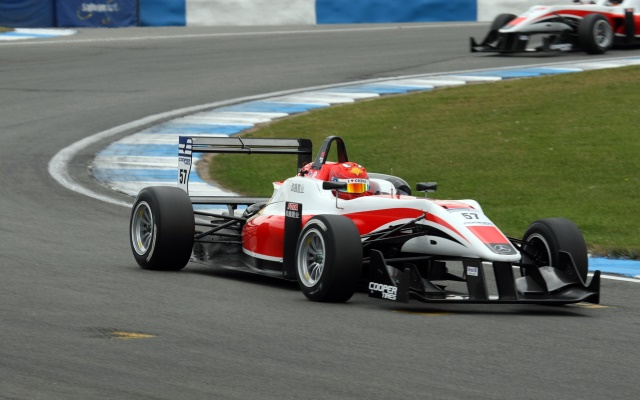 The battle between Fortec team-mates Martin Cao and Matt Rao for what is feared could be the last British F3 title ended in favour of the former after the season finale at Donington Park. The first race was decisive, with Rao stalling on the grid and coming back to third while Cao claimed victory, extending his points lead to 24.

Cao then finished second in race two behind Rao to take a 20-point lead into the final race. That meant, with only a five-car field, that he simply had to finish, so he started from the pits and cruised round in last place to seal the title by two points, as Rao took a second comfortable win.

Max Marshall finished second in races one and three, while Camren Kaminsky took third places in races two and three. 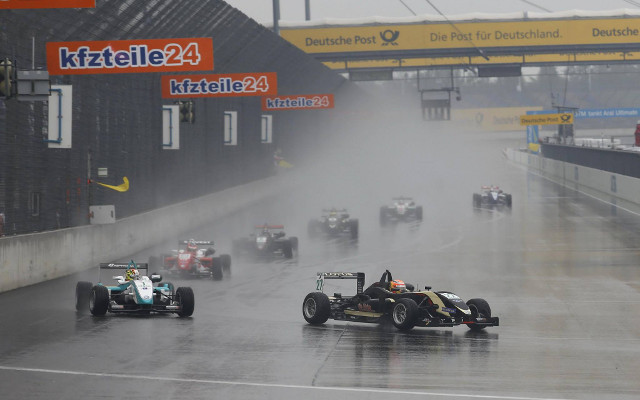 Markus Pommer put himself in position to wrap up the German F3 title next weekend with victory in the two races ran on a Lausitz weekend hit by the weather. With race one postponed to Sunday because of fog and the reverse grid race cancelled altogether, Pommer took comfortable victories in the wet on Sunday morning and dry conditions of the afternoon.

He now has a 107-point lead, with 138 available from the final two rounds. Nearest rival Nabil Jeffri kept his narrow hopes alive by finishing second to Pommer in both races.

Indy Dontje completed a Motopark podium lockout in the opening race, but contact restricted him to sixth in the second race. Sam MacLeod benefited to take third. SMP-backed Nikita Zlobin scored his best ever result of fourth in race one, and went on to repeat that in the finale. 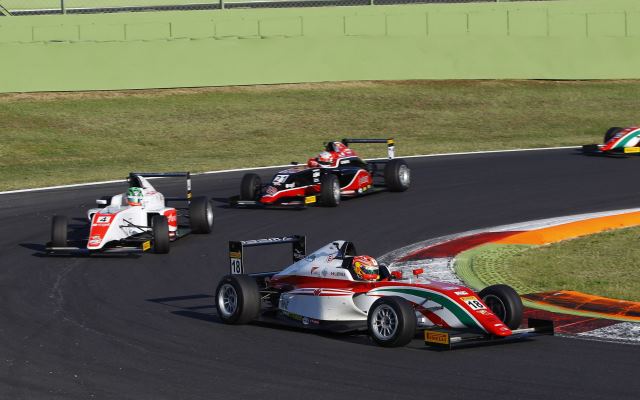 Little more than three months after the Italian F4 championship began, 15-year-old Lance Stroll wrapped up the title at the end of round five of seven at Vallelunga, where Prema dominated and Stroll scored his sixth and seventh wins of the year. The Ferrari protege had to play second fiddle to team-mate Brandon Maisano in race one, but with the Frenchman not eligible to score, Stroll took maximum points and did the same with wins in races two and three.

After coming fourth in race two, Maisano was second to Stroll in race three after an error cost him the lead. That was enough for him to secure the Trophy classification for drivers born before 1996. Takashi Kasai gave Prema a one-two-three in race one, and finished tenth and fourth in the other races.

Andrea Fontana and Alain Valente made the podium behind Stroll in race two, while Mattia Drudi completed the top three in race three.

Bruno Baptista scored his first win in F4 Sudamericana in the fourth round of the season – and the third at the El Pinar circuit – to stay in the championship lead after a race one retirement. Juan Manuel Casella claimed victory in the opener with a late pass on Felipe Ortiz, but Ortiz still took the standings lead away from Baptista.

Casella led much of race two, but had to settle for second behind Baptista, whose victory was enough to put him back into the points lead, with Ortiz finishing back in fifth place. Nicolas Muraglia took his best-yet result of third in race one, as did Francisco Camarotta in race two.

American driver Colton Herta – the son of IndyCar owner and ex-driver Bryan – joined the AsiaCup Series for the second round at Sepang and ended Jake Parsons‘ winning run in the opening race.

Having won the four races at the opening round, Parsons would go onto win the three remaining races.

Max Verstappen’s former karting rival and fellow 16-year-old may have missed out on the Alps title to de Vries, but Leclerc upstaged him in the Eurocup in Hungary with two second-place finishes, adding to his similar result last time out at the Nurburgring. Up against all the experience and ability in the Eurocup field, it’s an impressive feat, and suggests he could also be ready to make big steps up the ladder. 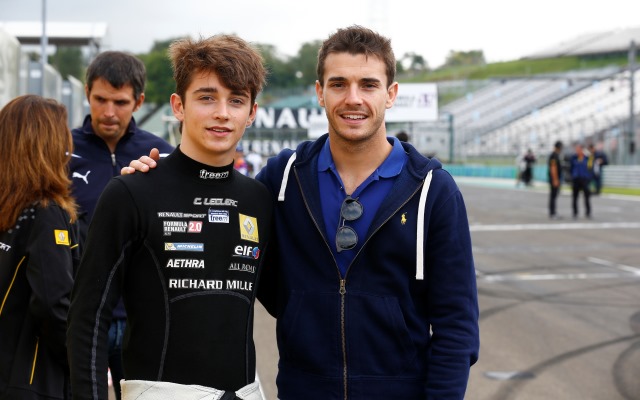