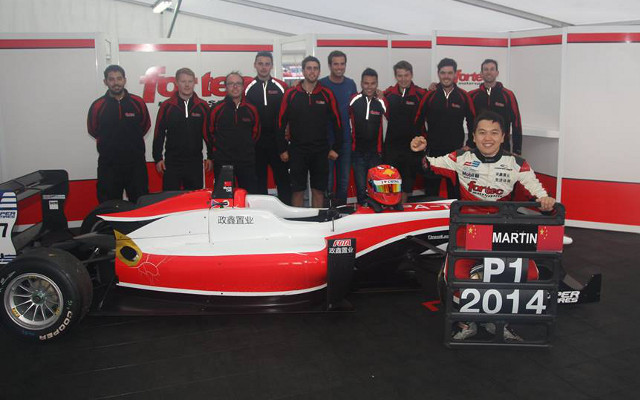 Newly-crowned British F3 champion Hong Wei Cao says he would be happy to stay with the Fortec team as he continues his single-seater career.

A fifth place finish in the season finale at Donington Park at Sunday was enough for Chinese driver Cao to secure the prestigious title, becoming the first driver from the Fortec team to do so.

After competing in various single-seater categories in Asia, Cao joined up with Fortec for the 2012 Protyre Formula Renault championship and finished fourth in the 2013 standings before moving up to F3 for this year.

“Fortec is a good team and I’m quite enjoying my time with them,” said ‘Martin’ Cao, speaking to Paul Davies shortly after claiming the title.

“The team boss Richard Dutton is a really good man, and he helped me a lot. Also, my team manager Dan Mitchell and Riki Christodoulou, who is my driver coach, are working really hard, as are my mechanics.

“So, it’s a good team, professional, and I’m happy to stay with them.”

Cao said he didn’t yet know what he would be doing next, but that he would like to continue racing single-seaters. Speculation has linked him to a Fortec seat in the two remaining European F3 rounds this year and the Macau Grand Prix.

“We’ll have a chat, have a sit down, see what’s going on and plan for the next year,” he said.

Asked what he would like to do in 2015, he replied: “Still formula cars. Not really GT or touring cars.”

Rao pleased despite missing out

Cao’s season-long rival Matt Rao, who fell short of his team-mate by just two points after dominating the final two races of the campaign, was still pleased with how his weekend and his season as a whole went.

“The weekend’s been great,” said the Toulouse-born driver, who also stepped up from Protyre Formula Renault this year.

“There was a little bit of a problem on the Saturday race but it’s great to really dominate the two races on Sunday, and take both wins and all three fastest laps. 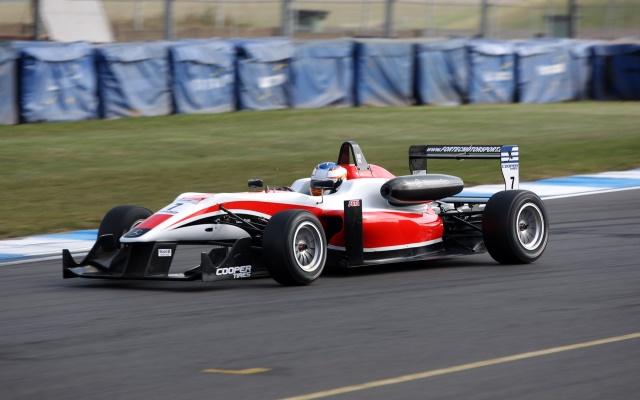 “The season’s been good, considering where we started out. Last year, Cao finished ten places ahead in the same championship, so to see how much we’ve improved throughout the year is great.

“If you look back and think of negative aspects, maybe my consistency and scoring podiums rather than trying to go for wins all the time, but I think having finished as the driver with the most wins [five versus Cao’s four] just shows we had the raw pace.”

Rao said that is aiming to either continue in Formula 3 next year or move on to an alternative like GP3.

“I’m not sure yet, we’ll have to see, look at budgets and see what proposals teams can come through with,” he said.

“But I’m definitely moving on up, either staying with the F3 car or potentially going to GP3, something like that. It all depends on who phones us, and who we can call”