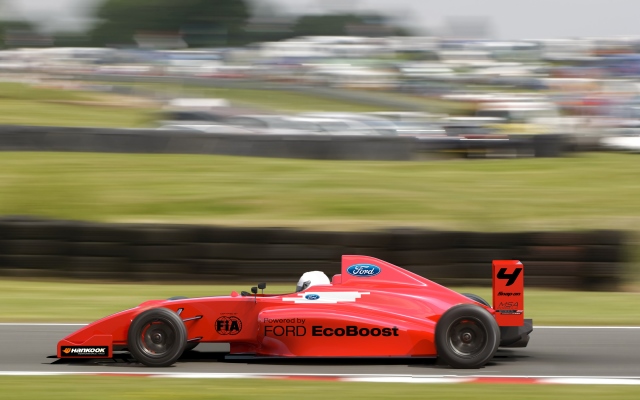 Details have been released for Formula Ford GB’s switch to FIA F4 rules for 2015, with the series to use the name MSA Formula and a Mygale chassis.

The championship’s full name will be MSA Formula ? Certified by FIA, Powered by Ford EcoBoost. It avoids a naming conflict with Jonathan Palmer’s existing BRDC F4, which is set to run to the FIA’s concept from 2016.

As expected, the series will utilise the Mygale’s FIA F4 car. The French manufacturer supplies all but one of the chassis currently used in Formula Ford, has won the last nine titles, and their F4 car is also set for the proposed series in Australia and China.

The car will be powered by the same Ford EcoBoost 1.6 litre used in Formula Ford, and supplied by a single engine tuner, Sodemo. Korean firm Hankook will take over from Dunlop as tyre supplier, providing rubber identical in compound and construction to that used in the FIA F3 European Championship.

Hankook and Ford will award the 2015 champion with a test for ‘a leading FIA F3 team’.

The series will remain as the single-seater support category on the popular British Touring Car Championship package, for all ten events.

The new car will be unveiled at next weekend’s penultimate Formula Ford meeting at Silverstone. Orders will commence there on 27 September, the first 15 cars will be delivered by the end of the year.

?After many weeks of careful consideration we are delighted to be able to reveal details of MSA Formula ? Certified by FIA, Powered by Ford EcoBoost,” said the Head of Ford Racing in Europe, Gerard Quinn.

“We believe this to be the most remarkable initiative in junior single-seater racing since the launch of the original Formula Ford in 1967, a concept which helped develop and mould the track careers of so many of motor racing?s great names.

“We are certain that MSA Formula is absolutely the right package to help set the young drivers of today on the path to similar glories through the FIA ladder of opportunity, of which this series is the first recognised step.

?MSA Formula offers an affordable package, one which will bring top-level single-seater racing within the budgets of a host of young driving talent. This was the world governing body?s aim when it announced its regulations for FIA Formula 4, and Ford is delighted to assist in delivering that promise.

?We have competitively tendered all key elements of the championship, including chassis, engine and tyres. This offers entrants into the series the most affordable single-seat series cost and is the only championship that complies with the FIA global cost cap specified within its F4 regulations.”

MSA Chief Executive Rob Jones added: “The launch of MSA Formula is a really exciting development for UK motor racing, and for young drivers looking to establish themselves in the sport. The objective is to provide young drivers with a clearly defined career path, offer global recognition and a solid foundation in racing.

“The affordability of the championship and alignment to global regulations will once again establish Britain as the place to come to race. Our driver development programme will offer MSA Formula drivers the best possible learning experience. I firmly believe that the MSA?s adoption of the FIA?s F4 concept makes this the clear choice for young career drivers.”

Gerhard Berger, who has formed the FIA F4 concept in his role as Single Seat Commission President, commented: “FIA Formula 4 is in full expansion and our concept is in the process of establishing itself throughout the world.

“With this agreement between the MSA, Ford and the FIA, the United Kingdom will benefit from the best possible combination to ensure the perpetuity of this Formula. Being able to rely on the powerful platform of the BTCC is also an enormous plus.

?All the ingredients are thus gathered together to see to it that the MSA Formula ? Certified by FIA, Powered by Ford EcoBoost proves a success. It is essential for the United Kingdom, a country that places great importance on motor sport.?