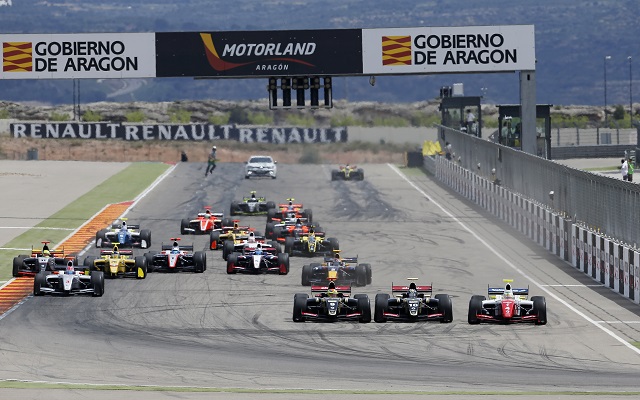 The Formula Renault 3.5 opener has rather clearly established two of the likeliest contenders for the 2015 crown. And if Oliver Rowland being one of them surprises precisely no one, the same cannot be said for Matthieu Vaxiviere.

The French driver was fantastic over the pre-season, but doubts remained over whether his pace was genuine. However, as he swept both practice sessions and Saturday qualifying, his Aragon speed was evidently real.

Still, when rookie Gustav Malja was denied a sublime debut front row due to a technical infringement, Rowland moved up to front row.

But, when Vaxiviere was sluggish off the line, it was Meindert van Buuren into the lead out of T1, albeit with the help of a jump start that was promptly penalised. As such, Rowland became the de-factor leader and his teammate Jazeman Jaafar behind him had no interest in sabotaging a Fortec 1-2.

Vaxiviere was denied third by debutant Dean Stoneman and then missed out on Sunday pole to Eurocup champion Nyck de Vries. However, after trailing de Vries for much of the rain-disrupted second race, he pulled off an audacious last-lap move to steal the lead with a corner to go. 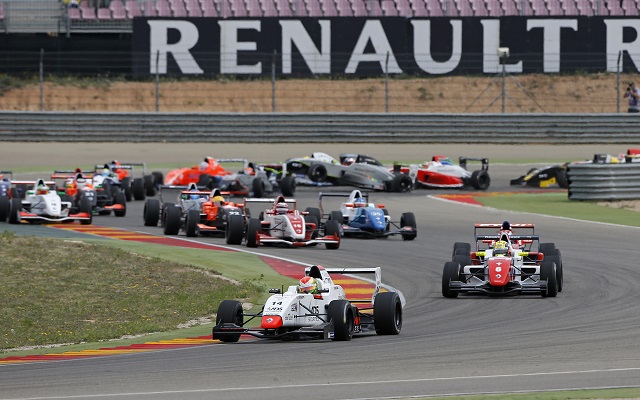 As the NEC runner-up, Louis Deletraz was expected to be a frontrunner in the Eurocup this season but exceeded such predictions by winning both races on day one of the campaign at Aragon.

2014 runner-up Dennis Olsen improved as the weekend went on, taking a sixth and a third on Saturday before winning a wet finale from pole.

That third race was run mostly behind the safety car, its appearance prolonged by two separate incidents that took out the four cars running behind Olsen – Jack Aitken, Ignazio D’Agosto, Ukyo Sasahara and Martin Kodric. That helped Deletraz to finish sixth after qualifying back in 15th, and giving him a 10-point lead over Olsen.

Anthoine Hubert had a strong start to the season with third, sixth and second to take P3 in the standings. Kevin Jorg finished second to team-mate Deletraz in race two and was one of five drivers to score points in all three races.

Ben Barnicoat was second in race one and fifth in race two but a collision ruled him out in the final encounter, and landed him with a grid penalty for Spa.?Darius Oskoui, making just his second appearance after two years out of racing, inherited third in race three after the safety car shenanigans. Peter Allen 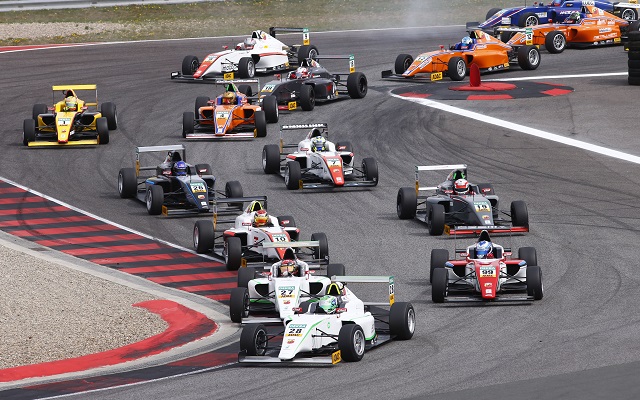 A whopping 38 drivers took to the track for the first ever ADAC F4 round but the vast majority of the attention was given to just one.

HTP’s Marvin Dienst is not that driver, but he is, in fact, the championship leader, having fully justified HTP’s decision to enlist him for the campaign. Dienst drove around teammate Janneau Esmeijer in the first race and then led lights-to-flag in race two, surviving numerous safety car restarts over the course of his two victories.

Prema’s Ralf Aron took second in the opener, with top Italian F4 alumnus Mattia Drudi starting his ADAC campaign with third. Esmeijer, whose shock pole in race one didn’t yield a points finish, recovered to complete an HTP 1-2 in the second race, while Aron took another podium.

But it was Mick Schumacher who was the focus of most and ended his first weekend in car racing by claiming a very popular win in the reverse-grid race. Luck did smile on the German as the race ended under the safety car, coming out just as he was having to defend from more experienced teammate Joey Mawson.

Yet Schumacher, in all fairness, was indeed probably the best karting graduate at Oschersleben and more than deserved his milestone win.

A good word should also be said for another driver straight out of karts – Thomas Preining. The Austrian was a very late addition to the Mucke lineup, yet gave the team their only podium of the weekend. Valentin Khorounzhiy 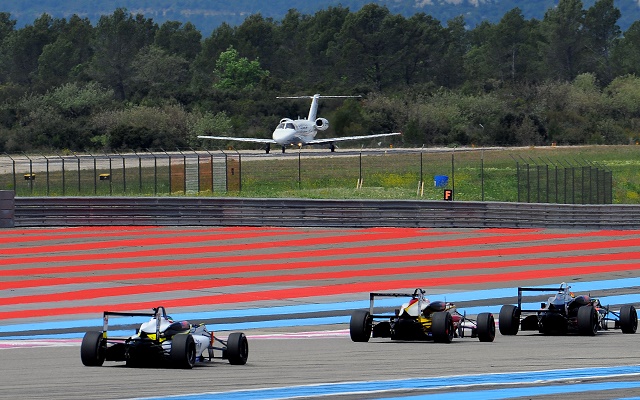 It’s very much early days but?RP Motorsport’s signing Vitor Baptista is well on course to establishing himself as one of the biggest revelations of the Euroformula Open series in the recent years.

The Brazilian F3 B class champion was already very quick at Jerez, but seemed the fastest driver on the grid at Paul Ricard as he converted his Saturday pole into a maiden win.

On Sunday, he was beaten to pole by Konstantin Tereshchenko, but passed him early in the race. The Russian, however, showed remarkable composure to stay with Baptista and take the spot back in the closing stages.

With Tereshchenko also salvaging a remarkable third in race one after starting eighth, the Campos driver leads the points, albeit Baptista isn’t far off.

Neither is Alessio Rovera – the Jerez race winner, switching from DAV to BVM, was on the podium in both races and is likely to be a major player in the title race if he has the funds to see out the season.

There should be a reasonable amount of worry in the camps of pre-season favorites Yu Kanamaru and Yarin Stern – neither seemed capable of challenging the leading trio on pace and will need to quickly rebound if they are to remain in contention. Valentin Khorounzhiy 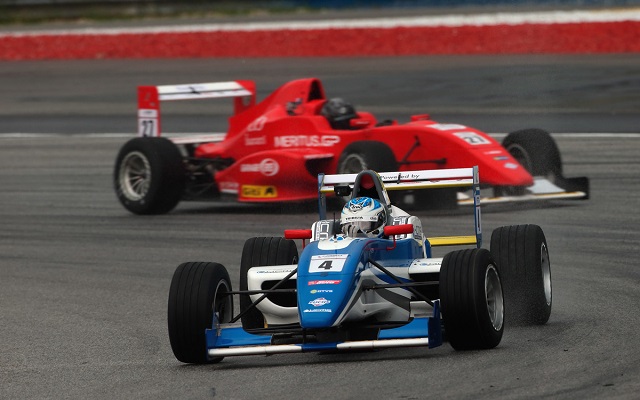 Australian Jake Parsons has taken an early lead in the Formula Masters China Series after two wins in the opening round at Sepang.

Parsons had to play second fiddle to ex-Formula Renault racer Martin Rump in a wet race one, but the AsiaCup champion triumphed in the later two races.

Rump followed Parsons home in race two but was only 10th in the finale after first corner contact with pole-sitter Asuka Muratomi.

Matthew Swanepoel completed the race one podium. Aidan Read was third in the final two races, coming in behind Daniel Woodroof in the latter. Peter Allen 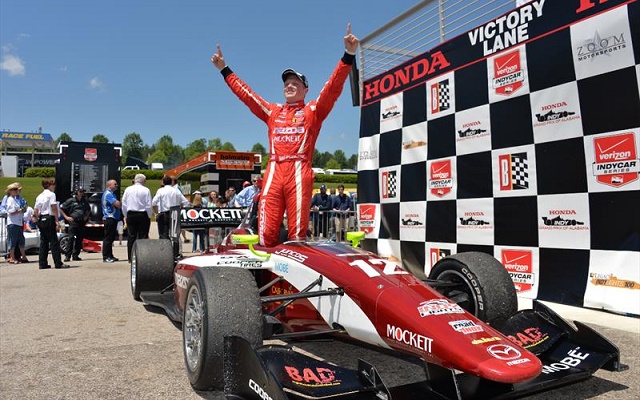 Spencer Pigot was 3-for-4 in terms of Barber Motorsports Park wins before heading into last weekend’s Indy Lights round. He left with a 5-for-6 statistic and the championship lead to go along with it.

After easing to pole by a quarter of a second, the Californian appropriately dominated the first race. There was a shaky moment in race two when tried to lap Ed Jones and the duo made contact, but both escaped unscathed and Pigot went on to complete the double.

For Jones, who went into the round unbeaten, it was a very tough, unrepresentative weekend. Struggling with tonsillitis, he was just fourth in race one, denied by first-time podium finisher RC Enerson. Jones was then ruled out of contention early on in race two, forced to pit after contact with Kyle Kaiser. He was very quick upon rejoining, which probably makes the incident all the more upsetting.

It was not all doom and gloom for Carlin, though, as Jones’ teammate Max Chilton finally claimed his maiden podium in the series.

With Pigot and Jones seven points apart out front, Jack Harvey is not far back, having driven two very calm races to bring his number of second-place finishes in 2015 to four. Valentin Khorounzhiy 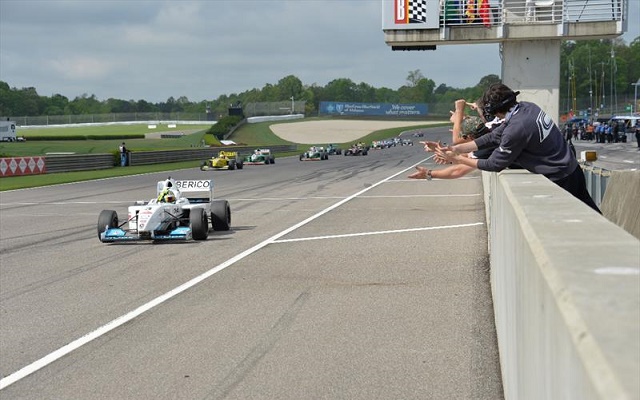 ?A game of two halves? might be a much-maligned clich? in football commentary but it certainly seems to describe Weiron Tan’s Barber outing really well.

Flawless through Friday and Saturday, the former Caterham junior delivered his first win of the regular season, controlling race one by two seconds over Frenchman Timothe Buret.

But starting race two from pole, he first forced Buret off at the start and then collected another Juncos driver Jose Gutierrez later in the race, with both incidents resulting in Tan being penalized.

Championship leader Neil Alberico was probably quite grateful for the Tan ? Buret clash, which allowed him to cruise to victory in the second race and increase his championship lead.

But a very strong Barber outing by Santi Urrutia ? who was the only driver to make the podium in both races ? sees him just eight points off the American.

Meanwhile, after a very rocky start to his season, 2014 race winner Garett Grist was back in the top three in race two and is now seventh in the standings, trailing third place by just six points. Valentin Khorounzhiy

USF2000: Telitz and Jamin win yet Eidson remains in first 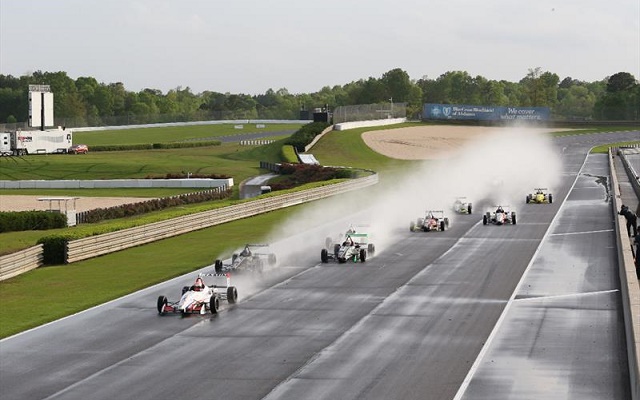 Championship leader Jake Eidson has not led a lap since the St. Petersburg opener but if the old adage that consistency wins championships is true, he’s got that part down. After taking his third and fourth consecutive third-place finishes at Barber, he is now the only USF2000 driver to maintain a perfect run of podiums in 2015.

Frenchman Nico Jamin seemed poised to take the points lead off Eidson as he lined up on pole but a first-lap collision with fellow front row starter Victor Franzoni left him a lap down.

Franzoni and Eidson ran first and second for most of the race, only to be both passed by Aaron Telitz in the final minutes.

With heavy rain hitting the track ahead of race two, Jamin eased to victory from pole, while Anthony Martin picked off Franzoni and then Eidson to claim second.

Eidson still has a solid 11 points on Jamin and 21 on Telitz, but it’s early days and everyone in the trio looks very capable of taking the title fight to the wire.

Franzoni was disqualified from the final race for a technical infringement and now has a lot of ground to make up, having dropped behind Martin and trailing Eidson by 54 points.?Valentin Khorounzhiy

Pigot dominated the Indy Lights weekend at Barber. He was much quicker than the rest in qualifying, went unmatched in races one and two and is now the only driver in the series to make the podium in all five races so far this year, putting him into the championship lead ahead of early pace-setter Ed Jones. 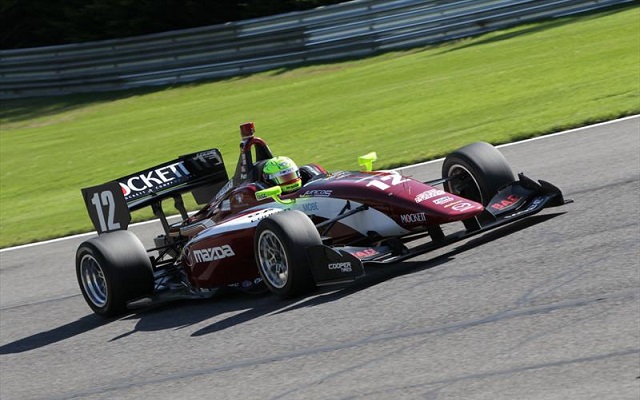