Adrian Quaife-Hobbs and Sergey Sirotkin took a win each in the Auto GP races at Valencia. Also in the roundup there’s Italian F3, Formula Abarth and Formel Masters action…

Adrian Quaife-Hobbs and Pal Varhaug arrived in Valencia tied at the head of the Auto GP World Series points after their wins at the opening round at Monza. The former would once again be joint top-scorer in Spain, but it would be Sergey Sirotkin who would deliver on the promise he had shown in Italy.

Quaife-Hobbs repeated his pole position from Monza in qualifying, but was beaten off the line by Sirotkin at the start of the first race. The 16-year-old Russian headed off into the distance during the first stint, and although a slower compulsory pitstop allowed Quaife-Hobbs to close back up, the safety car then wiped out his advantage altogether. The race restarted with just one lap to go, and Sirotkin held on for his maiden victory. Varhaug followed the leading duo across the line.

Quaife-Hobbs and Sirotkin began the second race from the fourth row of the grid, but moved up to third and fifth places respectively on the first lap. They both came in for early stops, with Quaife-Hobbs then using a series of fast laps to inherit the race lead and the victory once everybody else had stopped. Sirotkin suffered from a slow pitstop, meaning he could only finish third behind Argentina’s Facu Regalia.

Varhaug could only finish eighth, meaning Quaife-Hobbs now has a 21 point lead over the Norwegian. Sirotkin is just a further five points behind. The next races take place on the streets of Marrakech in Morocco in two weeks’ time. 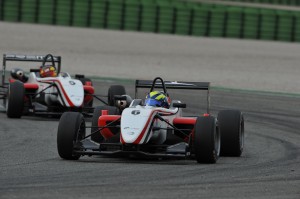 Martins ahead of Maisano (Photo: ACISportItalia.it)

We had expected that Ferrari protege Brandon Maisano would be the man to beat in Italian Formula 3 this season, but it were his two Prema teammates that would share two of the three race wins in Spain and lead head the European Series standings.

Eddie Cheever claimed pole position in qualifying for the first two races, and went on to win the first one. The third Prema driver Henrique Martins kept his teammate at bay to claim second in a Prema 1-2-3. Sirotkin, taking on a total of five races this weekend, claimed fourth place on his F3 debut, ahead of Spaniard Gerard Barrabeig.

It was another Prema podium lockout in Race 2, but a poor start from Cheever saw Martins take the lead ahead of Maisano. The Brazilian stayed in the lead until the finish, leading home Maisano and Cheever. Riccardo Agostini claimed best-of-the-rest in fourth, ahead of Barrabeig and Sirotkin.

Reigning Formula Abarth Italian Series champion Patric Niederhauser started on pole in the third race courtesy of finishing sixth in the first encounter. This Swiss driver, who will also race in GP3 this season, duly converted that into victory, despite having only agreed a late deal to race this weekend. He led home the reigning Abarth European and Rookie classification champions Sirotkin and Barrabeig. Maisano finshed ahead of his teammates Martins and Cheever.

That result meant that it was Martins who would leave in the points lead, two points ahead of Cheever with Maisano a further six behind. Round two takes place at the Hungaroring on 5/6 May. 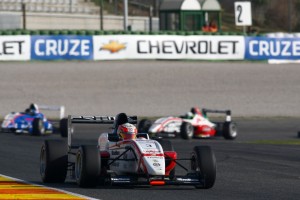 Prema had a similarly winning start in Formula Abarth in Valencia. Their second year driver Luca Ghiotto began the first race from pole, but lost the lead to Kevin Jorg at the start. He regained it three laps later though, going onto record the first win of the season. Brazil’s Bruno Bonifacio completed the podium in third, ahead of Emanuele Zonzini, Venezuelan female racer Samin Gomez and Nicolas Costa.

Jorg had pole for race two, but Ghiotto turned the tables on him to take the lead into turn one and go on to record a double win. Swiss driver Jorg fell to fourth place, finishing behind Zonzini and Bonifacio. Costa and Gomez completed the top six.

Costa started the third race from pole, but it was a fast-starting Euronova teammate Zonzini who took the lead at the start. He ran wide though, falling behind the Brazilian duo of Costa and Bonifacio. He then tried to regain second from the latter, but took both himself and Bonifacio out of the race. Giorgio Roda inherited second place, but Jorg got past him. Roda then came under attack from Ghiotto, but the teammates made contact. A bad end to the weekend for Jenzer, as the two joined Bonifacio on the sidelines.

Gomez at that point was down in fourth behind Gregor Ramsay and Santiago Urrutia, but she worked her way past both to claim a first podium finish. Uruguay’s Urrutia finished fourth, Scot Ramsay in fifth and another Venezuelan Javier Francisco Amado in sixth.

Ghiotto leads the standings despite his third race retirement, six points ahead of Jorg. The championship resumes in Hungary on 5/6 May. 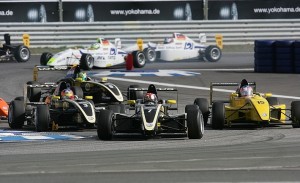 Lotus driver Jeffrey Schmidt claimed pole position for the first race of the season at Oschersleben, but it was teammate Marvin Kirchhofer who won the race – his first ever car race. Second-year driver and pre-season favourite Jason Kremer finished second, while female single-seater debutant Beitske Visser crossed the line third, but was given a 30 second penalty for a jump start and so was classified ninth. Schmidt inherited third, with rookie Florian Herzog fourth, Sweden’s Gustav Malja fifth and Hendrik Grapp sixth.

Kirchhofer and Schmidt were fighting over the lead in race two until they clashed with two laps to go, handing victory on a plate to Austrian Thomas Jager. Belgian debutant Alessio Picariello took second, with Poland’s Kuba Dalewski third after starting 13th. Malja was fourth, Visser fifth and Kremer sixth.

The third race saw a third new winner, with another Lotus driver Dalewski coming through from sixth on the reverse grid to win. Luca Caspari started and finished in second place, with Malja taking an amazing podium finish in third despite spinning and dropping to the back of the field early in the race. Picariello, Kirchhofer and Herzog completed the top six. Jager had been running fourth, but spun while fighting with Kremer. Jager finished 12th, Kremer 15th after a drive-through.

Kirchhofer leads the points, just one ahead of both Dalewski and Malja who are tied for second. Jager is just one point further back in what looks as though it could be a closely-fought season. Round two takes place at Zandvoort on 11-13 May.

PaddockScout Driver of the Weekend: Sergey Sirotkin – Russian youngster benefited from lots of mileage of the Ricardo Tormo Circuit, but his pace in both Auto GP and F3 was highly impressive given his lack of experience in those cars. Meanwhile, Martins, Ghiotto and Kirchhofer all emerged as men to watch this season in their respective series.