Valencia may seem an odd place for two Italian championships to start, but both have been on a bit of a continental expansion. Series organisers have created a new European Series for Italian F3, which will be made up of all eight rounds, while the Italian Series gets underway at round three at Mugello, after a trip to the Hungaroring, and will consist of the remaining six meetings.

This follows the introduction of a European classification for Formula Abarth last season. This year it will share the same calendar as the F3 championship.

Both grids follow the worrying theme across Europe of shrinking grid numbers, with just 11 drivers taking part in each series this weekend. For F3 that’s down from 16 for the first round of last season, while for Formula Abarth it’s down from 21 as last year’s season opener (although it’s worth mentioning that the first round of the European season, also at Valencia, only got 14 entries).

Despite a lack of entries, the Italian F3 grid still contains a number of exciting young drivers.

The clear pre-season favourite has to be Brandon Maisano, the Ferrari Driver Academy youngster who stays on for a second season after finishing fourth overall last year with two races wins. The man most likely to challenge him is Prema teammate Eddie Cheever. That’s not 1980s F1 driver and 1998 Indy 500 winner Eddie Cheever, but his son Eddie Cheever III. He finished ninth in the standings last year, and a move to Prema should see him add to his three podium finishes. The third and final driver at Prema is Brazilian Henrique Martins, who spent the last two years in the Formula Renault Eurocup with a handful of points finishes.

The grid contains a number of graduates from Formula Abarth, with reigning European champion Sergey Sirotkin racing for Euronova, alongside another Abarth graduate Yoshitaka Kuroda of Japan. There are two signings from Formula Abarth at the Ghinzani team too, with Romanian Robert Visoiu (who will also race in GP3 this year) and Spain’s Gerard Barrabeig. The duo finished fourth and fifth in the European Abarth standings last year as the top rookies, and both will be men to watch this season.

The BVM team won the title with Sergio Campana last year, and this year have Canadian Nicholas Latifi, who jumps straight out of karting, and Italian Mario Marasca, who finished tenth overall in European Formula Abarth last year in his second year in the category. Italian Formula Abarth champion Patric Niederhauser will drive the team’s third car in Valencia, though it remains to be seen whether he will do the full season alongside his GP3 commitments.

Perhaps a sign that costs are to blame for the fall in numbers in Formula Abarth, more than half of the 11 drivers are South American. 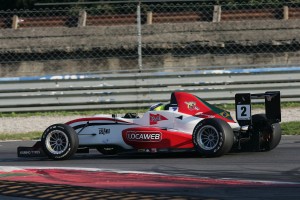 The first of those is at Prema, in Bruno Bonifacio of Brazil. Those that followed the Toyota Racing Series will be familiar with Bonifacio, who finished tenth in the standings. The reigning Class B champion in South American F3, he begins as one of the favourites after contesting the second half of last season. Teammate Luca Ghiotto should also be a contender, having finished sixth in the European standings last year as a rookie. Another second year driver Giorgio Roda completes the Prema lineup, but doesn’t look to be as quick as his teammates.

Euronova carried Sirotkin to the title last year, and this year enter cars for Brazil’s Nicolas Costa – ninth in the European standings and fifth in the Italian classification last year – and for San Marino’s Emanuele Zonzini, also a second year driver.

Swiss team Jenzer Motorsport were amongst the frontrunners last year, and this year their lineup is led by Kevin Jorg, who contested the final two rounds of last season and steps up from the Formula BMW Talent Cup. Lady racer Samin Gomez is one of three Venezuelans and returns for a second season, while Scotland’s Gregor Ramsay contests a full season after making his car racing debut at the end of 2011, and has been catching the eye of the Ferrari Driver Academy.

BVM run just one car, for 15-year-old Uruguayan Santiago Urrutia – another to make his debut in the series at the end of last year. Two more Venezuelans complete the field; rookies Amado Javier Francisco at Diego Motorsport and Juan Branger at JD Motorsport.

Pal Varhaug and Adrian Quaife-Hobbs arrive in Valencia tied at the top of the standings after their Valencia wins. Sirotkin will hope that his extra running at the circuit this weekend will help him to play catchup after stalling off the front row in the first race at Monza.

There are a number of driver changes, with 30-year-old Estonian Sten Pentus, who finished fourth in FR3.5 in 2010, joining Varhaug at Virtuosi UK. He replaces Matteo Beretta, who switches to Zele Racing in place of Giacomo Ricci. Brazil’s Yann Cunha joins Ombra Racing in place of Adderly Fong.

Amongst ADAC Formel Masters’ recent champions are Daniel Abt and Richie Stanaway, while last year’s champion Pascal Wehrlein has moved onto the F3 Euro Series.

With the top four from last year having moved on elsewhere, Kean Kristensen would have started as the defacto title favourite. He was due to remain with the Motopark team for whom he scored three race wins last year, and are running under the Lotus banner this year. He is however, for some reason that is currently unknown to us here at PaddockScout, absent from the Oschersleben season opener.

The other five Lotus drivers are present and correct, four of which are making their first steps out of karting. They are Poland’s Jakub Dalewski, reigning German karting champion Marvin Kirchhofer, Dutchman Indy Dontje and compatriot and highly-rated female racer Beitske Visser. The team is completed by Switzerland’s Jeffrey Schmidt, who finished 14th overall in 2011. 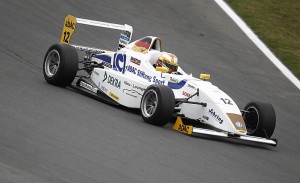 Amongst the favourites are the Mucke Motorsport duo of Jason Kremer and Roy Nissany. German Kremer won at the 2011 season finale as he finished seventh in the standings, while Nissany, the son of one-time Minardi tester Channoch, was twice on the podium earlier in the season before tailing off and ending up in11th place. They are joined at Mucke by karting graduates Luca Caspari and Florian Herzog.

Another returning duo to watch are Neuhauser Racing’s Gustav Malja and Thomas Jager. Malja was 13th overall last year, while Jager finished on the podium on a one-off race at Assen while he was racing in Formula Renault. 15th overall last year was the rather epically-named Hubertus-Carlos Vier, who is joined at KUG Motorsport by car racing rookie Nicolas Pohler.