Racing Steps Foundation driver Jack Harvey got his British F3 title assault off to the best start at round one at Oulton Park. The Carlin driver claimed a double pole position in qualifying on Friday, meaning he would start the first and third races from first place. He would convert that into a dominant victory in Race 1 on Saturday morning, with a supreme drive in damp conditions.

His Petronas-backed teammate Jazeman Jaafar made a good start to his third year in the series, claiming second place after getting past Harry Tincknell off the line. Tincknell fell behind another of his Carlin teammates Carlos Sainz as well as leading Fortec contender Hannes van Asseldonk. Red Bull Junior Sainz went on to complete the podium on his debut in the championship, but fellow newcomer and recent Toyota Racing Series runner-up van Asseldonk sliding off the track on the very last lap as he chased down Sainz. Tincknell inherited fourth, ahead of last year’s dominant Formula Renault UK champion Alex Lynn.

All 12 finishers in Race 1 were reversed for the Race 2 grid, putting Aussie national class runner Duvashen Padayachee on pole for the 20 minute dash. His rival Spike Goddard took the lead at the start, and held on for several laps with a queue of quicker cars behind him. Pipo Derani eventually fought his way past, and was still leading when the safety car was called out after Fortec teammate Lynn had clipped a tyre wall and come to a stop. The race restarted for one final lap, and Derani held on to claim his first win in F3. Compatriot Pietro Fantin was second and the first of the Carlin quintet, leading Jaafar, Tincknell, Sainz and Harvey across the line.

Harvey was on pole again in the third race at the end of the day, but it was F3 debutant Felix Serrralles who beat him into turn one, having already surprised by going second quickest in qualifying. Meanwhile, Derani failed to get away and the safety car was needed as his stricken car was recovered. After the restart Serralles gradually eased away from Harvey to record a debut victory, the Puerto Rican adding to his recent race win in the Toyota Racing Series. Harvey’s second place handed him the early championship lead, with Tincknell beating Sainz to the final podium spot. Jaafar took fifth in front of Lynn and Fantin.

Harvey sits six points clear of Jaafar, with Tincknell, Sainz and Serralles close behind. The field moves on to Monza in Italy for round two next weekend.

Also in action at the Cheshire circuit was Formula Ford GB, also with a brand-new chassis. Finland’s Antti Buri won the first race ahead of Argentina’s Eric Lichtenstein and Brit Jake Cook. Cook took the honours in race two ahead of Buri and Fred Martin-Dye, while race three saw a third different winner in the form of Luke Williams with Cook and Buri completing the podium. Buri and Cook are tied for the points lead, with the next round at Brands Hatch in support of the DTM and European F3 on the weekend of 18-20 May. 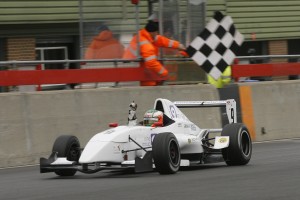 Another championship, another three races and another three different winners, this time at Snetterton. Ginetta Junior champion Seb Morris claimed pole for all three races, but his race one lead was lost when he ran wide on lap two. Late series returnee Josh? Webster inherited the lead and would go on to win the race. Record-breaking Formula Ford champ Scott Malvern had actually stolen the lead from Webster but was denied a debut win after getting stuck in sixth gear. David Wagner and Macaulay Walsh completed the podium.

Race two saw Morris successfully convert pole into victory, with a margin of seven seconds to his nearest rival. Webster stole second place from Malvern on the final lap when the latter again suffered from gear problems.

Everything did come together in race three for Malvern, benefiting when Morris stalled and going on to win. Webster was second with Jake Dalton in third.

Webster leads the points ahead of Morris and Malvern. Round two takes place at Rockingham on 19-20 May.

PaddockScout Driver of the Weekend: Jack Harvey – He showed himself to be the quickest man in the British F3 field this weekend, and he’ll hope that he can retain that advantage for the rest of the year.

Next Brit rising the ladder with Racing Steps: Jack Harvey