The youngsters hoping to follow in the footsteps of Ricciardo, Vergne and Nasr start their seasons this weekend at Oulton Park. We pick out the names to watch there, and in Formula Ford and Formula Renault BARC…

The British Formula 3 grid has shrunk in size a bit over the winter, with the main class down to just 12 entries for the season opener compared to 19 12 months ago. It looks as though it’s going to be a battle between the five Volkswagen-powered cars of superteam Carlin (winners of the last four titles) and the four Mercedes-engined Fortec cars. 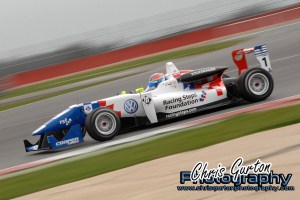 Leading Carlin’s lineup is Jack Harvey. The Racing Steps Foundation driver is embarking on his second year in the category. After finishing runner-up in Formula BMW Europe in 2010, where he won more races than champion Robin Frijns, Harvey had a tricky start to his maiden F3 season with Carlin last year. Despite his nationality, he had a lack of track knowledge on the British circuits compared to his rivals. This was proved when he won at the Nurburgring at the start of the mid-season continental trip, in which he also clinched podium finishes at Paul Ricard and Spa. He maintained that form until the end of the year, finishing ninth in the final standings.

It should be noted that Felipe Nasr struggled with the jump from Formula BMW to F3, as did Esteban Gutierrez. After his learning year last year, Harvey will be aiming for the title this time around. Still only 18, he has been setting the pace in pre-season testing, and should be winning races from the off.

His biggest rival is likely to be Carlos Sainz Jr, a driver Harvey raced back in Formula BMW. A rookie he may be, but Sainz has the material to win first time. This is the fourth year Red Bull have placed a driver in British F3, with Carlin, straight out of Formula Renault. On all three previous occasions, their drivers won: Alguersuari, Ricciardo and Vergne. No pressure then…

Runner-up in the Formula Renault Eurocup and champion in the North European Cup last year, Sainz is at least as talented as that trio. He may only be 17 and have two years of car racing behind him, but he has the skills needed to win right away. His chances will be helped against those with experience by the brand new Dallara chassis, which will mean that everyone has had to start from near-scratch.

Although Harvey and Sainz look strongest, the remaining three drivers in the Carlin lineup shouldn’t be scoffed at. Jazeman Jaafar returns for a third year in the category and his third with Carlin. He won the Formula BMW Asia title back in 2007, having only turned 15 in the November of that year. Last year the Petronas-backed Malaysian lay third in the standings after three podium finishes from the opening couple of rounds. Unfortunately he only picked up one further podium, dropping him to sixth overall.

After testing in Formula Renault 3.5 at the end of last year we’d expected him to move on, but he’s continued for 2012. The 19-year-old will hope experience will pay off and get him the title, but we’re not sure he will be able to compete with the raw talent of some of his rivals. That said, he’s been topping the timesheets during pre-season testing, and looks like he could be a match for Harvey and Sainz.

Another to give his teammates a run for their money in testing as been Harry Tincknell. Twice a fifth-placed finisher in Formula Renault UK in 2009 and 2010, punctuated by a winter series title, the Brit continued his modest record thus-far by ending up 11th in his rookie F3 season last year. A switch to Carlin from Fortec over the off-season seems to have given him a boost, that and the brand new chassis in use this year.

Going by his pre-season form Tincknell will easily be joining Harvey, Sainz and Jaafar on the winner’s rostrum, adding to the sole victory he scored at Brands Hatch last year. Whether the 20-year-old can take the fight to them in the points race remains to be seen however.

Completing Carlin’s quintet is Brazilian Pietro Fantin. He impressed at times in his first full season in British F3 last year with the now-absent Hitech team, most notably at Rockingham where he took pole position and a double race win. Better track knowledge should make the 20-year-old a more regular threat at the front. So should the switch to top team Carlin.

He’s been a bit adrift of the ultimate pace in testing though, and regularly been the slowest of the Carlin bunch. In itself that doesn’t mean he won’t be at the sharp end, but a title challenge looks unlikely at the moment. 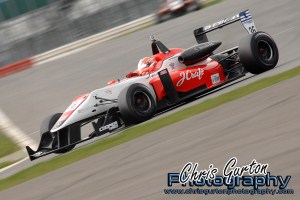 Fortec’s hopes are undoubtably pinned on reigning Formula Renault UK champion Alex Lynn, who sticks with the team for his graduation to F3. It took him a year’s experience in Renaults before dominating proceedings last season, but this time he looks set to be an F3 frontrunner from the off.

Lynn has consistently been the best-placed of the non-Carlin runners during testing, and the 18-year-old looks set to be the guy most-likely to take the challenge to Carlin in the title race.? Regular race wins should happen, but we’re not sure he’s quite going to have enough in his locker to win the title. A top three berth is a more realistic target, while still being a significant achievement in itself.

Lynn looks to have a considerable edge over his Fortec teammates, even though a couple are more experienced at this level. Last year was Pipo Derani‘s second in F3, having contested the lesser German F3 Cup the season before.

That experience didn’t count for much though, as only a handful of points finishes meant he finished down in 15th in the final standings, and that only after a podium at the penultimate round at Donington. A switch from Double R to Fortec could boost the 18-year-old Brazilian’s chances, but he doesn’t seem to have the talent needed to match Lynn.

Lynn’s nearest challenger from within his own team will almost certainly be Hannes van Asseldonk. Last year was only the Dutchman’s second in cars, like Lynn, but he was already racing in F3 in Germany. He had a promising season, ending up fifth in the final standings. The real achievement of his season however was repeating that result at Macau, against the best in the business.

The 20-year-old further added to his credentials over the winter with a fine campaign in the Toyota Racing Series in New Zealand. He ended up second in the final points, and was clearly the best of the large overseas contingent. On paper that experience should give him the edge over Lynn, but perhaps a lack of track knowledge has been the reason why he has fallen short in testing.

Another man to have put in a strong campaign in TRS completes Fortec’s lineup. Puerto Rico’s Felix Serralles has been racing for Fortec in Formula Renault for the past year in a bit, since coming over from the US. He had a solid 2011, coming 12th in the Eurocup and picking up a couple of podiums as a guest entrant in the UK championship.

TRS saw him claim a race win on his way to eighth in the final standings, despite missing an entire weekend. More podium finishes this year should be the aim, and the 19-year-old could even sneak a race win or two with the reverse grids. 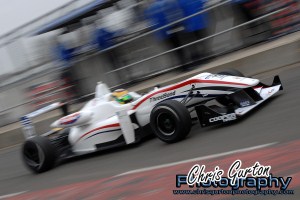 Moving away from the two main teams, and onto T-Sport, a team that carried Sergio Perez to a mighty fourth place in 2008. Then they were still using Mugen-Honda power, and after a stint with VW they’ve put their faith back in the Japanese with a new Nissan unit tuned by Tomei. Just one new car for now, which will be driven by Nick McBride.

The Australian steps up from Formula Ford, where he was classified third last year. He also showed promisingly in the Formula Renault Finals Series, placing sixth. The new engine seems to have run well in testing, and so 21-year-old McBride could be the one to break the Carlin-Fortec monopoly.

T-Sport also enter one car in the rookie (or national) class for another Australian graduating from Formula Ford GB, Richard “Spike” Goddard. The 19-year-old came tenth in the standings in his first season in Europe. 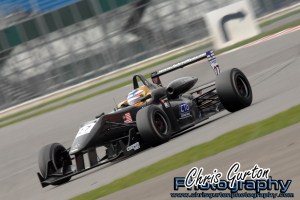 The team originally established by Kimi Raikkonen and his management has taken a tumble in recent times and this year struggled to get any cars on the grid at all. In the end it has managed to fill three cars, two in new cars in the main category. The first of those is driven by Malaysian Fahmi Ilyas. After arriving in F3 last year after two seasons in Formula BMW, Ilyas managed just two top ten finishes – and that was with Fortec.

He did win one of four European F3 Open races he contested, but the move down the pitlane to Double R combined with a lack of pre-season testing could make life difficult on paper. The shrinking of the grid however should see the 20-year-old more often in the points, with reverse grid podiums perfectly possible.

The deal that put Geoff Uhrhane in the team’s second Dallara F312 came together even later, since the last pre-season test. Another Formula Ford graduate, he finished fifth in the British championship last year. A total lack of testing certainly will make for a tricky start to the 20-year-old Australian’s rookie season.

Yet another Aussie in the team’s rookie class car – 21-year-old Duvashen Padayachee. He’s raced in Formula BMW in Asia for the past two years, finishing fifth in the JK Racing standings last year. He’s done less testing that compatriot Goddard, and seems to be second-best to him in the tests he has done.

Supporting British F3 this weekend and for most of the season in British Formula Ford. The championship that produced the likes of Jenson Button and Mark Webber not too long ago has really slumped in recent seasons in terms of graduates. But it’s still a series that can produce rising stars, including GP3 racer Tio Ellinas. Returning racers Jake Cook and Luke Williams should be contenders, and so could their Jamun Racing teammate Eric Lichtenstein of Argentina. Also in the mix could be the JTR pairing of Scholarship champion Cavan Corcoran and Ecuador karting graduate Julio Moreno.

Another British series getting underway this weekend is Formula Renault BARC, starting off at Snetterton. The BARC championship is quickly growing from its history as a club-level championship, particularly with the demise (for now) of its big brother Formula Renault UK. Former graduates include 2010 Formula 2 champion Dean Stoneman. The reputation is growing so much in fact that this year Escuderia Telmex, the scheme behind Sergio Perez and Esteban Gutierrez, has sent two young Mexicans along – Diego Menchaca and Jorge Cevallos.

Two big names are Josh Webster, the runner-up last year and MSA Team UK member who had been due to race in FRUK until its cancellation, as well as last year’s record-breaking Formula Ford champion Scott Malvern, who had been eyeing a move to Formula 2 until a lack of backing nearly forced him out of racing altogether.

Joining Menchaca at Fortec are reigning Ginetta Junior champion Seb Morris, Laura Tillett, who steps up to cars after racing in the World Karting Championships, and Chinese driver Martin Cao. Danish Formula Ford runner-up Jacob Nortoft lines up with Hillspeed, with a strong past in karting behind him. There are a number of other drivers who could be in contention in what promises to be a closely-fought season.