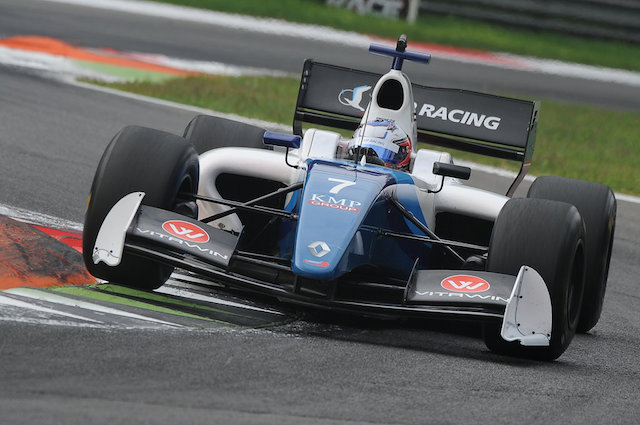 Egor Orudzhev won the second Formula V8 3.5 race at Monza by shooting from fifth?on the grid at the start, while?Louis Deletraz?took another chunk out of the?points lead.

Orudzhev starred in a chaotic starting phase of the race, which began with?Roy Nissany losing his second pole of the weekend to a stall before the formation lap, forcing him to start from the pits.

At the start proper, Orudzhev quickly swept into the lead ahead of?Nissany’s Lotus team-mate?Rene Binder, but his team-mate?Aurelien Panis hit trouble at the very back, squeezed between two others and launched?into the air.

Then at the first chicane there was slight contact between Deletraz and?Matthieu Vaxiviere over third that sent the latter bumping over the inside kerbs and to a brief halt when he returned to the track, dropping him to the back.

Panis required medical assistance under the safety car and was taken to hospital, but suffered only back pain.

When Binder made his mandatory stop from second, Orudzhev pitted one lap later to retain his slim advantage, and remained just under a second ahead until the chequered flag.

Binder might have led had he not spent his out-lap (and Orudzhev’s in-lap) defending from Deletraz.

Dillmann?was fourth during the opening stint, but a slow pit stop left him to finish down in eighth.

He had a 40-point margin over Deletraz coming into the weekend, but is now only 11 points ahead with two rounds remaining.

Yu Kanamaru led after pitting later than anyone else and finished fifth.

Vitor Baptista?spun away sixth at the first chicane with 12 minutes remaining, which promoted his team-mate at RP Motorsport this weekend,?Will Buller.

The Super Formula regular, who qualified third but made a slow getaway, ultimately finished seventh behind the recovering Nissany.