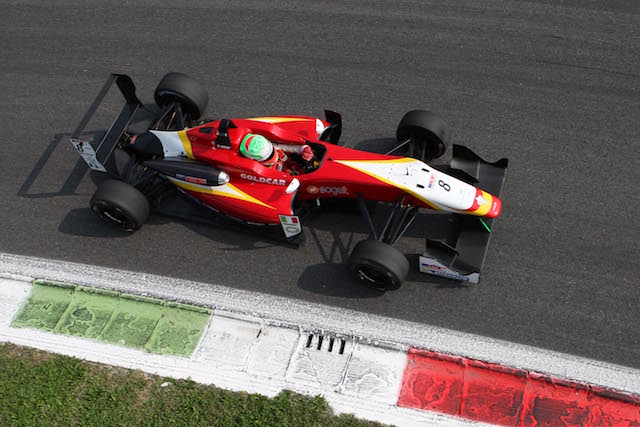 Leonardo Pulcini stretched his Euroformula Open lead with a double victory on home soil at Monza, grabbing the second around the outside of?rival Ferdinand Habsburg?at the final corner.

Sam MacLeod?briefly led race one – on a first appearance of 2016 with Fortec as he prepares for a likely Macau entry – after coming from third on the grid down the inside of the first chicane, but he would quickly drop backwards with a broken differential.

Pulcini passed the Briton at the start of lap two, but was kept honest by fellow Italian?Damiano Fioravanti?in the early stages before gradually pulling away.

The 18-year-old’s?closest series?rival Ferdinand Habsburg?fought his way up to third from 10th on the grid.

Enaam Ahmed triumphed in an entertaining scrap with?Antoni Ptak and?Diego Menchaca?for fourth, the trio going three-wide onto the final lap as Ahmed fought back after RP team-mate Ptak went around the outside entering the Parabolica.?Tanart Sathienthirakul joined?the fight and finished seventh on Menchaca’s tail.

In his second outing,?Nikita Troitskiy took pole for race two and retained the lead off the start ahead of?Colton Herta and Pulcini, who got in front?of the American at the Roggia chicane.

Pulcini was then passed around the outside of the entry to Ascari on lap two by Habsburg – the pair then banging wheels down the following?straight before Ahmed got inside Pulcini at the Parabolica.

This fight gave Troitskiy a 3.5-second lead by the end of lap two but he was quickly reeled in by Drivex team-mate Habsburg, who got ahead at the first chicane on lap eight.

Pulcini had cleared Ahmed on the lap before, and on the following lap he took second from Troitskiy.

From there he?soon closed on Habsburg, but locked up?into the first chicane with four laps left and had to take to the escape road.

Two laps later, he got in the slipstream down the straight and tried to force the door open at the first chicane, the pair making contact and both running over the inside of the corner.

On the final lap, Pulcini dived to the inside of Habsburg at Curve Grande and they practically interlocked wheels through the right-hander.

Pulcini got ahead but Habsburg tried to fight back at the Roggia and regained the lead after cutting across the inside.

Habsburg weaved left and right down?the straight after Ascari, but after eventually choosing to defend the inside, Pulcini took more speed around the outside to steal the victory.

Habsburg just held on to second from Troitskiy at the line, but is now 64 points behind Pulcini with two rounds remaining.

Ahmed faced a fight to hold on to fourth until the Campos pair of Menchaca and?Julio Moreno tangled entering the Parabolica, but Herta still passed him on the final lap, recovering from being dumped outside of the top 10 on the opening tour with a wide moment at the second Lesmo.