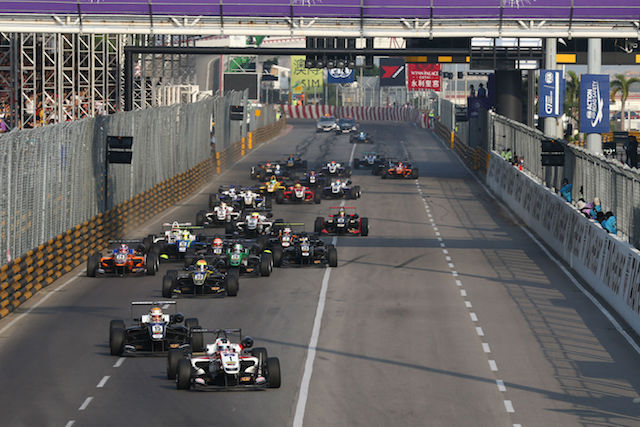 The entry list for this year’s Macau Grand Prix Formula 3 race, the first to be known as the FIA F3 World Cup, has been released, featuring veterans and debutants alongside this season’s regular competitors.

Felix Rosenqvist will bid for a third straight win in the race as he makes his seventh start with his 2015 team Prema in place of the new European champion Lance Stroll, who has decided not to do the race due to other commitments – likely to be related to his anticipated Formula 1 debut with Williams.

At Prema, Rosenqvist joins 2014 Macau podium finisher Nick Cassidy and Stroll’s closest European challenger Maximilian Gunther, who will be contesting the race for the first time. With teams limited to three entries,?Prema’s?usual fourth Ralf Aron is absent from the entry list but working on a deal.

Rosenqvist, who is now racing for Mercedes in the DTM and GT racing and makes his Formula E debut with Mahindra this weekend, is joined on the entry list by another former winner and another factory Mercedes driver Daniel Juncadella.

The Spaniard, who won in 2011 and was competitive on his return last year with Fortec, will drive for Hitech alongside George Russell and Nikita Mazepin and in place of Ben Barnicoat, who follows the trend of other Racing Steps Foundation drivers by?not contesting Macau as an F3 rookie.

Callum Ilott will be one of the only F3 regulars with past Macau experience, joined at Van Amersfoort Racing?by Anthoine Hubert and Pedro Piquet with Harrison Newey missing out.

Having missed the past two European series rounds, Carlin will return to give F3 debuts to triple 2016 single-seater champion Lando Norris and GP3 regular Jake Hughes, who tested with the team last winter. Peter Li Zhi Cong is set to return after his huge crash at the Red Bull Ring in May.

Fellow British teams Fortec and Double R will also return to FIA F3 action, the former deploying Sam MacLeod – who ran highly for West-Tec last year – and Ferdinand Habsburg while Alexander Sims makes another appearance for the latter. After serving a 12-month ban, Dan Ticktum is expected to race Double R’s other car but is not yet on the entry list.

Japanese champion Kenta Yamashita will make his third Macau start?with the T-Sport team instead of the Toyota-powered TOM’s outfit, which will just run rookie Sho Tsuboi. Yamashita will drive T-Sport’s Tomei-engined car that ran well in Macau last year in the hands of Arjun Maini, while local driver Andy Chang Wing Chung will drive the NBE-powered car as he did at Imola last weekend.

Jann Mardenborough, who challenged Yamashita for the Japanese title, will make his Macau debut with the now-Volkswagen-powered B-Max team. Of the three Nissan factory GT drivers that raced alongside Mardenborough this season, Daiki Sasaki has been chosen to make?his Macau debut over Mitsunori Takaboshi and Katsumasa Chiyo, who have raced there before. China’s Hong Li Ye will drive another B-Max entry having done so in the last four Japanese series rounds.

Tadasuke Makino – runner-up up to Tsuboi in Japanese F4 last year and Honda’s best representative in F3 this year – ?will drive his usual Dallara entered and powered by Toda.