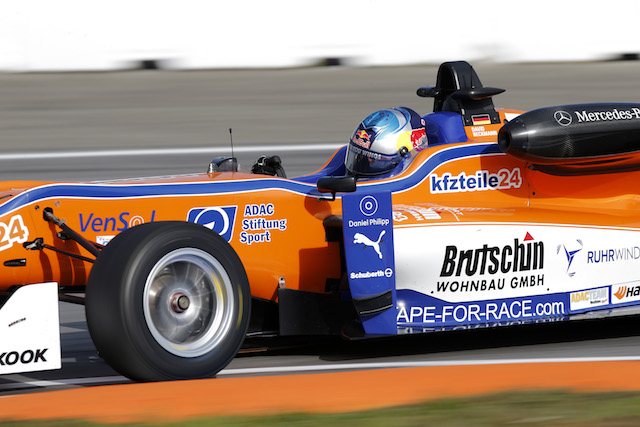 The German, who missed the start of the season as he hadn’t yet turned 16, took top spot away from Stroll with three minutes left on the clock with a lap of 1m31.627s.

Stroll improved his time with his next effort, but it was 0.012 seconds slower than Beckmann, who clinched Mucke Motorsport’s first pole since Spa in June 2015.

Making his European F3 debut for Carlin ahead of competing at the Macau Grand Prix, GP3 racer?Jake Hughes?defied his relative lack of car experience to be fastest of all across the two?free practice sessions and then claimed fourth on the grid.

Nick Cassidy and?Ralf Aron ensured the entire Prema effort was inside the top six, in front of leading Van Amersfoort racers Anthoine Hubert and?Callum Ilott. Hubert is attempting to prize away the rookie title from the grasp of?Joel Eriksson, who was 10th.

Another British Carlin debutant Lando Norris?- who was fastest in his first race weekend session in FIA F3 – was ninth fastest, but he will have to start all of the races from the back of the grid having exceeded the permitted testing limits as he gears up for a step up to the series next season.

The same will be?true of?Dan Ticktum, who is returning from his 12 month suspension from racing, and wound up 18th for Carlin.

George Russell missed the session after suffering an engine failure at the end of practice, and will have to take three 10-place grid penalties for changing the Mercedes unit.

Niko Kari?similarly sat it out with another change of VW engine in his Motopark car. The Finn was already?due to take a combined 13-place grid penalty in race one carried over from Imola, where he needed an engine change and had race three contact.